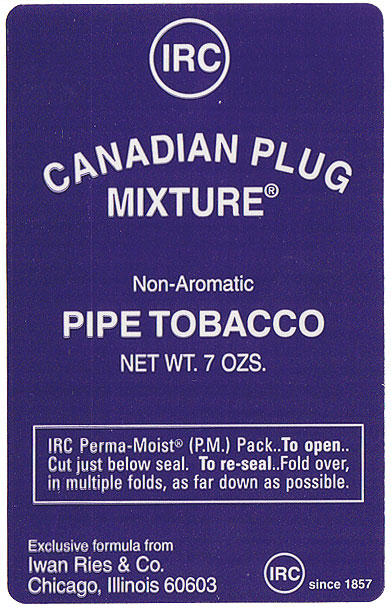 A mild tobacco blended with cigar leaf for a straight-forward pure tobacco taste.

When I ordered Dr. Bradley I ordered this too. I thought I would give it a try, especially after reading the reviews here citing cigar leaf. I smoke cigars and thought it might be a nice addition. Also, although experienced with Dr. B, I don't believe I have ever sampled this IR blend before.

I never detected or tasted gar leaf. Mostly seemed to be a "high note" blend in the taste arena that hit my tongue on the sides and back. It never developed deeper tobacco notes or tastes and if over puffed could heat up. I am guessing this is mostly a Virgina leaf blend with little pressing, aging, heating or other processing prior to cutting and rubbing out.

I will have to try it in some other pipes. At present not a favorite, but am sure there are those who like it. It might also make a great blending tobacco.

Reattack: I am adding a star to this blend, but only after discovering some ways to prepare it for the match.

Update Dec 11, 2011 I have had this tobac aging since 07 and my last review and tried it again last night. Aging helps it. Still little gar taste, but a nice nutty flavor develops, especially after the first third of a bowl.

I left this tobacco out overnight to dry after I discovered that a pipe I packed with it smoked better after sitting out all night. On drying, the topping evaporates to a large extent, improving its smoking qualities. I found no bite and more "lower note" or nutty tobacco tastes. This is a typical cavendish blend (with black stoved Virginia) that is better without the aromatic topping.

You will think it's a stogie hanging from your lips rather than a pipe if you smoke this plug. I purchased some for a pipe club meeting about a year ago. It received conflicting reviews. Those in the group who enjoyed an occasional cigar said this blend really did taste like a cigar.

Iwan Ries has been selling this blend for many, many years. So, it has its fans. I'm just not one of them.

What are you fellas smoking???

This is quality from start to finish. This is a rare beast of a cigar blend with a mild topping, and the interplay works very nicely.

Heavy and dense, with just enough plum (I think!) going on behind the scenes to make it a rich reward, burns cool and even, and finishes to a nice ash. No drama, not bitey, I don't know if I got a different batch or what but this is going into my rotation.

Not as special as Sinclair's Highland Slices, but when done in a cube cut its magnificent.

I find this to be a very interesting and full flavored blend. This has an old time flavor similar to the likes of the Gourmet English BUT with a variance. This blend includes cigar leaf and burley which give it some additional body. I think that this blend is under-rated and I recommend it to anyone who enjoys the ingredients.

There are very few IRC blends I havent tried . I generally shy from blends with cigar leaf . However , this blend was a stunner to me ! The cigar aspect is mild and really came off more as an oriental , kinda . It smokes very cool and has a med + mouth feel . It's isnt overly rich and is super balanced .. nothing funky . Anyway , I've only smoked a couple bowls of it but wanted to pop something up here that I can edit later as I truly learn the blend . In a nutshell .. surprisingly damn good !

Purchased From: A gift from a PSF member

Iwan Ries's Canadian plug is a mixture of "Burley, Black Cavendish, Cigar Leaf, Perique, [and] Latakia." It starts off pleasantly enough, with a slight nuttiness form the burley, with a hint of sweetness from the black cavendish, some spice from the perique, and a tad of latakia smokiness. The cigar taste is there, but it pops up only every few puffs. At first, the side-stream aroma is enticing--just a hint of aromatic (I'm not sure what comprises it, but it sure smells nice), which isn't present in the taste. However, in the second half of the bowl, everything goes south. The taste becomes muddied and bitter, and even the side-stream aroma becomes acrid. This tale of two bowls leads me ultimately to rate Canadian Plug as "Somewhat Recommended."

IRC website says this one is medium strength, and is composed of: Burley, Black Cavendish, Cigar Leaf, Perique, Latakia. What I get is mild to medium flavor and strength, with a slightly sweet, monotone blend of mild (yet decent) cigar-ish and slight burley flavors. It lit and handled well through the bowl, with nary a touch-up required. Aftertaste was quite cigar-like (not bad - not expecting a Padron Maduro).

Age When Smoked: not dated; at least 6 months

This blend is advertised by IRC as a cigar blend, but tasted to me like a very cheap "drugstore" aromatic like Middleton's Mixture 79. It had a very strong soapy taste. Given my penchant for English and cigar blends, I was very disappointmented. At the time I tried this, I was actually trying for something akin to Balkan Sobranie's Virginia #10, which is no longer available. This blend earns 1 star inasmuch as it makes smoke & that's about it!!

I like to keep my reviews short.So here it goes! Take Barking Dog,add cigar leaf,and kick it up a few notches and you have this mix. Not 1 of my favorites but someone may like it.