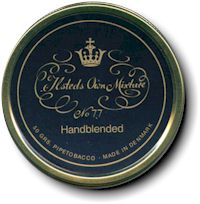 Tobaccos Ilsted - Own Mixture No.88

A rather light English blend, with the Latakia being noticeable enough, but not too dominating.

Easy to stuff, burning slowly and gently, this used to be my everyday tobacco for almost a decade, and I still like to revisit it every now and then; the VA and KY are foremost. Gently sweet and spicy, easy to handle.

This is a tobacco I would recommend to a beginner, and to aromatics smokers who would like to try an English tobacco without having to buy a whole tin of something that may be too radical for their tastes. For the English tobacco afficionado, I guess it could be a nice and mild take-a-break tobacco, though they're likely to find it lacking punch.

Recommended because it's a blend suitable for just about everybody. Enjoy!

I picked up a couple of tins of this at a local tobacconist because it was dated September 2000, and was under 10 bucks a tin. If there ever was any Latakia in this, it has long ago taken a back seat to the cased tobaccos in this mixture, which presented scents of honey and vanilla. At first I decided I did not like it, but as I continued to smoke this mixture, it grew on me. The Virginias definitely come through, and the casing is mild enough to complement the blend nicely. I like this as a late morning smoke, and it is very mild, leaving behind a pleasant room note. Do not buy this if you are expecting an English blend, as it is sure to disappoint if you do.

I concord with TheGerman and Doc'spipe. This is a good light modern english blend, with an elegant sweetness and easy to handle. I appreciate it.

I was looking for another flavored Latakia blend similar to Sillem's Black as a rotation partner. Ilsted blends are blended by the same blender as Sillem's Black - Kohlase & Kopp of Germany. Their website says it is flavored with honey and orange. This I could not honestly detect in the tin aroma. Perhaps a faint sweetness that remained so while smoking. Nor would I have guessed honey or orange if it hadn't been listed. It smelled mostly of Latakia and the addition of the Kentucky made for a pleasant, spicy smoke. It did smoke a bit hot, as does Sillem's Black, but I experienced no real bite. The tin sample was a bit sticky, but packed and retained its light without much problem. After a bit of drying, it retained its light fairly well. There was some moisture while smoking, and I was left with a mix of medium gray ash and a little dottle. It was a pleasurable smoke, and sweet tasting (not natural tobacco sweetness, but a cased sweetness) without being overbearing. A solid team player for that three or four time a week smoke. Although I prefer Sillem's Black, No. 88 can serve nicely as a change of pace for a mildly aromatic Latakia unless I find something better.

If you are looking for a mild Latakia, this would do. This may prove beneficial as a good introduction for the aromatic smoker who wants to branch out as I feel there is enough sweetness, albeit nondescript, to prove enjoyable. Hard-core Latakia smokers, I am sure, would find this too mild for their likes.