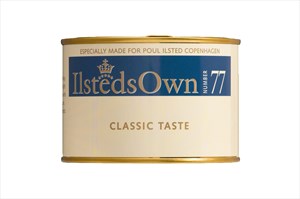 Tobaccos Ilsted - Own Mixture No.77

Ilsteds Own blend 77, hmm I wish it was but unfortunately it’s mine! I payed £29.10 for 100g. I’m afraid that I wasted my money. The tin note is that of stewed fruit, Dundee Cake, sweet, tart raisins. Unfortunately that’s were any sensory pleasures ended. No taste, no aroma nothing sweet about the cavendish just totally non descript and very dry. A large bowl like my Peterson’s burned down to white ash in around 15-20 mins. Such a letdown. No virtues whatsoever. It will also turn your mouth into a furnace!

The blend includes some big and chunky pieces of tobacco, they're not extraordinarily long but the area where that surpass other blends is with the thickness some of the pieces, short and fat!! The first negative is found in the hydration, it's a bit too little, not bone dry but it will NOT need any airing! The aroma is quite a simple raisin/dried fruit one, some tobacco smell but predominately dried fruit.

Due to the slight issue with the dryness it lights easily and once lit it gives a reasonable burn, it can burn a touch quick if you don't go easy with it but it's quite steady if it's not really drawn harshly. The flavour is exactly what I was expecting from the aroma, very raisin/dried fruit like! I'm not 100% sure what the added flavours are so I'm just giving you what I get! I don't find the nicotine to be at all strong in No. 77, it may affect people different as that's a subjective topic though I guess. The smokes temperature isn't too much but it issues a slight bite if it's puffed too hard. Because the tobacco was a touch on the dry side to begin with all I can see in the bowl at the end consists of grey ash.

I have found No.77 a nice smoke but I can't award it four stars due to the few negatives.

Stewed fruit sweet figs prunes and vanilla, musty not unpleasant but non descript. Fairly dry and ready to smoke needs no drying. cornflake style tobacco bits. Smokes fine dry and not bitter, flavour lasts the bowl long. Its ok but just another aromatic that is good but not great.

Very similar to No. 100 that I previously reviewed. The tin aroma had the faint smell of raisins instead of plums. Everything said of No. 100 holds true for No. 77, although No. 77 smokes a tad hotter and is fuller bodied. 3 stars for me and a player in my weekly rotation.