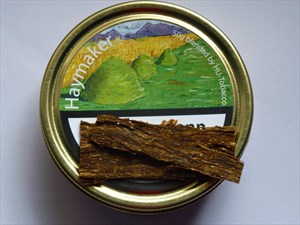 Haymaker is a natural sweet Virginia flake from Indian, Philippine and Brazilian leaf. This pure Virginia flake fascinates both by its full aroma, and a pleasurable smoking experience. Haymaker is an easy going companion with complexity for delightful smokes troughout the day. As for all HU-Tobacco flakes, no glues and binders are used and thus enable easy rubbing or fold and pack. Try it - love it !

A flake comprised of several varieties of Virginia with no topping. The natural sweetness of the Virginias create a mild tart and tangy citrus and some tangy dark fruit, which is complimented by some grass, hay, wood, and earth with light bread and floral notes. It reminds me of a more natural, little stronger version of Dunhill Flake without the added toppings. The strength and nic-hit are a step past the center of mild to medium, while the taste is a slot ahead of that mark. The flake is easy to rub out if you aren’t a “fold and stuff” smoker, but either way you pack it gives you a moderate burn rate with a clean, cool, smoothly consistent flavor from top to bottom. No bite even if you try to push it. Has a minute rough edge. Not much complexity here as it is designed to an all day smoke that doesn’t wear out your taste buds. Requires an average number of relights, and leaves virtually no moisture in the bowl. Has a short lived, pleasant after taste and room note. Can easily be an all day smoke.

This is another tobacco that was recently gifted to me, I've been very lucky to get a few of these recently. I only had about an ounce of it much like the others, however, unlike a lot of tobaccos that I can usually get at least some measure of with this amount, I've struggled with this one but I'll do my best to give a review of it.

The note in the sample bag it came in was mildly of vanilla and toffee, very pleasant. The dark brown flakes were not difficult to rub out and made for easy packing and lighting. The smoke itself is very mild and there is very little nic hit. I did have some difficulty discerning it, but there are sweet tones of caramel and toffee with odd little hints of vanilla. There is also something else creeping around underneath, it's quite an earthy tone I think but am not sure, something savoury, it's seems like the kind of flavour that shouldn't fit with the others but does, and does so very well. I'm not sure but it seems to be a taste akin to the smell of pipe tobacco I used to get as a kid from my great uncle and other pipe smokers I had the luck to pass by and a catch a whiff of their very pleasurable vice.

To be honest, having smoked so little and struggled to discern properly the full merits of this tobacco, I don't feel in any way qualified to review it. However, these are my impressions on the modest but generously gifted sample I was lucky enough to receive, so I am quite happy to be corrected and pulled apart by subsequent reviewers to whom I would advise "please do". However, I have had tremendous pleasure from smoking and working out the nuances of a very mild tobacco that I have, nonetheless, enjoyed thoroughly. It upholds the standards of all other HU tobaccos I have smoked and am starting to expect of them. A very guarded four stars pending further qualification from either other reviewers or my acquisition of more.

Wow! What a great Virginia! I got two tins of this in a trade a made with a German Friend. The tins were well aged which was a plus. I hadn't tried this one, but my friend assured me that I would love it. I did.

This is a Virginia right up my alley. It is hay like, citrus rich with that bright sweetness yet fulfilling enough to satisfy with both body and nicotine. To my tastes, I believe this to be a very pure Virginia since I really don't detect any topping. Any treatment done to this leaf is done with perfect sublety.

If I had to compare this to a blend, I would say it is close to Mac Baren HH Pure Virginia, but I felt this one had a little bit more body than HHPV. I am nitpicking though as both are splendid and, as it appears, the latter may be the only one available soon as HU appears to be another blender about to be lost to time, due to over regulation in Europe.

Purchased From: Trade with friend

Super tobacco. Similar to the Sunset Flake, but a touch fuller and with a bit more of a tang, I felt. Really creamy, smooth smoke, wonderfully soothing and calming. A beautiful fresh taste, with a biscuity feel. Great tin note and aroma. This grassy blend has all the hallmarks of a great handmade blend, with considerable attention to moisture, texture, cut, burn and taste. As with the Sunset, this leaves me satisfied and full of contentment. No bite, bitterness or tart aftertaste, just a fine mellow virginia sweetness on the tongue. A perfect smoke.

Age When Smoked: About two months from purchase

Purchased From: Direct from HU

Opening the tin, the name is borne out: a good, hay-ish note meets my nostrils, but the warm and sweet kind. Some notes of white wine, too, showing off the matured VAs that went into this blend.

The slices show bright yellows, medium and some dark browns, overall more bright than dark. Rubbing out is easy (OK, DTM don't add any glue, so that is a given), and folding won't do you any favours anyway with this blend.

Rubbed out, lighting is a single-match affair leading to little to no dottle in the end. The flavours are fully sweet, just a hint of the young-VA hay, though the grass and hay notes do build up towards the end. Apart from that, there is a beautiful malty note in there. The room note, for a pure VA, is quite good, too. Recommended, already!

I have returned to pipe smoking a few months ago after retaining from it for over 20 years. YES-I do enjoy it. I ran into this tobacco after reading some really qualified reviews on this site. This tobacco was my first flake after my "restart". I love it! It is easy to use (I´m using a burner for lighting and the fold-method for the flake) and delivers a very smooth,cool smoking experience down to the last peace of tobacco. It has a very pleasant taste with a little bit of lemon and -at some times- some light flowery element to it. But fortunately the taste always stays on the real tobacco side!

Age When Smoked: fresh from the pack

This is a pleasant Virginia smoke, no bite, easily lights and stays lit, burns to a nice soft white with little dottle. I really don't think there is anything that separates it from other Virginia tobacco blends that are much easier to obtain. This tobacco is not available to me locally so I probably won't go out of the way to obtain more. I did enjoy it and wouldn't discourage others for making it an all day Virginia blend they might prefer. Slightly more smoky taste than grassy which is one minor difference leading pipers to perhaps be surprised by the blend.

Age When Smoked: new out of the tin

Similar Blends: Many Virginia other blends..

Hrm. Haymaker. I had fairly high hopes for this, but i have to say, i'm having real difficulty trying to warm up to it.

Opening the tin, you're greeted by a smell of earth and grass, as well as the sight of some rough flakes, pressed together so tightly that it's almost like a plug. Not really a problem, but a curious thing you sometimes get with flakes.

It doesn't really need any drying before you pack your pipe with it, and it packs and lights perfectly fine. It also smokes fairly cool and consistently.

The issue i have with this is the flavour. It's earthy. Really earthy. As if there was some actual soil mixed in with the tobacco. There is the occasional hint of bread and grass/hay, as well as the occasional sweet note, but overall, the earth-notes are so overwhelming that i find it rather grim. Almost cigarette-y.

It's also the kind of flavour that makes me suspect i won't remember this tobacco for too long. It strikes me as a bit character-less.

In all fairness, it's very well behaved. Smokes cool, doesn't need many relights at all and doesn't bite. A bit of dottle and moisture, but for that, it's got the excuse of being a straight virginia.

It's got positive reviews, so i suspect it's more me than the tobacco, but ultimately, i just cannot seem to get on with this stuff.

Very good blend that you hardly hear anything about. It reminds me of Dunhill Flake in its strength and balance. I’m not sure why some have labeled this as mild, to me, it’s a solid medium. A very nice, stout, flavorful Virginia. I’ve only had it three times so far, but I’m really digging it and will be ordering some more.

In the little round tin is another blob-like mass from Germany pretending to be flake. You peel this off like a rasher of bacon stuck to it's fellows rather than individual slices. There is precious little aroma here.

As you can imagine it makes for a sticky, gooey time at loading but these strips do do eventually break down into some semblance of tobacco shreds. Folding is not a viable option. You may find you want to use that rarity, the tobacco knife, if you can find it, under all the plugs and twists you bought on a whim and just never got round to cutting up.

It's an absolute swine to keep lit. Half a tin of butane later and your still none the wiser. It has no taste, even less character and produces a feeble dribble of smoke. It's obvious then that it needs to dry out after preparation. After several hours it's still the same. Overnight it becomes a brittle piece of brushwood.

So, not wanting to admit defeat, I scoop it all out, separate the half-seared bits and stick it in a mixing dish and using, the knife I located earlier, slice up some godawful Kendal dark twist to go with it. Same result, a tastless, pointless mess.

So, all these reviewers can't be wrong. Maybe I'm doing something wrong with this 'flake'. I'm going to cellar it for a while (maybe even jar it) and see if it improves with age.

It didn't and I ended up finishing it. Not memorable.

Age When Smoked: New from tin.