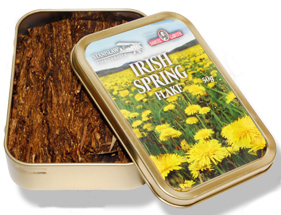 Irish Spring Pipe Tobacco by Samuel Gawith is Virginias blended with a touch of spicy Louisiana perique. The distinctive flavour comes from the old sherry barrels the perique matured in.

Longish narrow flakes, easily pliable for fold and stuff or easily rubbed out. I preferred this folded and stuffed. Refreshing tin aroma of Virginia with a little perique and a backdrop of what is apparently sherry. So far advertising claims are accurate.

Refreshing is a good word to use for the flavor of this. A bit of both sugar and spice, with a moderate emphasis on the former. Fits in with the spring. A lemon VA base but without the plodding over-citrus marination. The VA flavor is light but sweet and with a slight sour note. The perique is delicately applied but provides a bit of spice with the vaguest of peppery hints... just enough to stir up the proceedings. The sherry flavoring, and admittedly I've never tasted sherry so it eludes me, might be what's giving off the extra richness of flavor. However, it talking with a local sherry enthusiast, there are so many different styles that it's hard to know which was used here. Suffice it to say that this blend is a bit different in character than a lot of light Vapers, and I suspect the sherry is the reason. A different kind of sweetness than lemon Virginia and a different spice than perique. I can't really put my finger on it. But this is a fine, interesting and somewhat unique take on the VaPer is worth a shot if you're a fan of such blends.

A slightly coarse flake and faint aroma of peach greet you on opening. Quite moist, so best rubbed out and given just a bit of airing time.

The first impressions are of the underlying Virginia and for the first few puffs I found myself questioning whether there was any Perique in there at all. But after a minute or two, ah, here it comes, that dash of seasoning revealing itself with just a touch of spice. And then almost a hint of soft berries, intriguing and quite complex.

A gentle cadence is rewarded with a soft mouth feel and an unfolding of yet more flavour. Take this one nice and slow and it seems to keep giving a bit more as you work your way down the bowl, oh, there's a hint of apple now.

A very immersive experience this one, I found it a particularly calming and relaxing smoke. I think we have a winner on our hands.

The final Four Seasons for me to try. As I found with the other ones the actual flake is of a very nice build. I find it could use a small amount of extra drying time to help the rubbing but with only little perseverance it can be rubbed to a good consistency with ease. The aroma pre-light is mainly Virginia. Despite the moistness I find that it stays lit well, not requiring many re-lights. The sherry barrels used to mature it in give the smoke a sort of fruity sharpness. If drawn with too much force it will give a little bite but if smoked with ease it's an enjoyable smoke.

I could not find this stateside, so, did a swap with a fellow tobacco lover in England because I fell in love with the tin art. I picked up five of these tins and tossed (gently) four in the cellar. A very light and airy VaPer with plenty of flavor despite the less than powerful presentation. If you are a Perique fan but don't like a tub full with each smoke, then punch this ticket.

This blend was not for me. Extremely flat and nothing going on. I found my self puffing way too fast and scorching my tounge attempting to get some taste out of this.

Just for the record I very much enjoy VaPers but this one isn't going to be purchased again.

I won't say I was let down by this one, but I wasn't as taken with it as I was with the English Summer Flake in the same series. It is a quality Virginia as one would expect from SG, but the perique is so light it is hardly noticeable.

If I want something of this Magnitude, I will simply buy some Orlik Golden Slice and save a few bucks. I would be just as happy with that one or with PS LNF. Mind you, it is not a bad smoke, just in the crowded world of vapers it doesn't leave a mark on me.

Better picks for Vapers are Escudo, Solani 633 or the esoterica duos of Dorchester and Dunbar or SG's own St. James Flake. So somewhat recommended to the Gawith diehards.

I didnt expect to love this as much as I do. The sherry edge is very mild....and not sweet. The tobacco is lighter virginia flake, but still with some body-- more than i expected, actually. There is a quality that reminds me a tad of Brindle Flake, the McClelland blend for Ashton. Lightly stoved it seems. Great tin note and just altogether rather perfect. Not heavy, not strong, but balanced and delicious.

Big surprise. I have tried all from Four season series and left Irish Spring at the end. As VA/Per is not for me. Guys I did not notice Perique at all. For someone it could be negative effect. I appreciated sweetness without additional spices, tobacco was grassy, sweet with a bit tone of flowers. For piper focussing on straight VA. This is must try staff.

I was looking for a good springtime smoke, so why not succumb to SG's latest marketing ploy and give this one a shot.

Yes, it's a flake that's nicely suited for the spring: a nice quality flake, light and clean with a subtle hint of sweet hay, and I can almost convince myself that there's a hint of sherry in it as they suggest. It's an easy flake to work with, and stays lit very nicely.

There is some nuance here, but it's so subdued that I found myself puffing harder to tap into it, which rather defeats the point: the flavor seems to weakly hover around a satisfactory virginia rather than make an assertive landing. Thus I largely agree with ddmholst & TallPuffO'Burley: the end result for me is that there's not much going on here, resulting in a smoke I find a bit weak and flat.

It's definitely a nice flake, but in a crowded field it doesn't stand out for me. You could do worse, but you could also do better. Though good by most standards, it's not one of SG's finest.

This is the second in this series for me to try and so far I am very impressed with the series. The flakes come neatly packaged in the familiar square tin. I did notice some inconsistencies with the thickness of the flakes, but that is a very minor gripe. The size of the flakes are larger than some I have found, but not unwieldy. The moisture content at the cracking open of the tin is on the high side. If you try and light it before it has some drying time it will take longer than normal in staying lit. But once lit, the Virginia and the Perique really come together to form a great smoking experience. The components are of the high quality expected from SG. The nicotine level for me was about middle of the road. It is hardly anything that will cut you off at the knees, but you know it is present. This blend smokes down to a nice ash at the bottom of the pipe. Very recommended whenever it is available in your neck of the woods.

It is a very good Va/Per blend.The sweetness of Virgnia is smoothly playing with the pepper of the Perique.The sherry toping is giving a special flavour rounding the whole taste!It is very tasty tobacco!

I found this one a little disappointing in a way. It had a very bright flavour with definite citrus notes, and also a bit of bitterness you catch at the sides of the tongue. So the taste was fairly nice, the only thing is this tobacco had no backbone - it was all soprano with no basso... it was salad without the steak. I'm sure some will love this so don't let this review put you off, but I just crave something a little thicker and stronger. It would be nice to try all of the seasons - this one definitely has the feeling of spring, so I'll give them that!

This tobacco is delicious! I had my problems with VaPer-mixtures, because i'm more into aros and englishes but this flake is awesome. My local dealer didn't recommend it. He said: "...to simple, to flat, nothing special." He was right. I mean it's not a VaPer-bomb. The tobacco is very mild and still has a lot of flavour. If i had to choose a VaPer-alldaysmoke, this would be it!

Purchased From: H. Jestel in Paderborn

This is a mildly topped virginia flake with a little perique. I don't know how much perique is in it, but I hardly sense it, so it can't be a lot. On first light there is a very typical Samuel Gawith sensation of warm bread, spices, something like a vegetable broth. It settles into a very floral virginia flavor, bready, sweet, no dark fruits and no grass or hay. It is not complex like FVF or BBF, it has the bread notes, a little acid and an undercurrent of a peppery tingle on the tongue, which may or may not be from the perique. Virginias can do that as well. The floral flavors come through as something like apple juice and elderflower, but it's all intertwined and I find it hard to distinguish any unique flavors from this very well melded concoction. The name is apt, it is spring like with its floral, apple, elderflower on bready virginia flavor, and it is consistent to the last puff. It is presented as a flake, very much like FVF and other SG flakes and requires the same prepping. I give it 4 out of 4 stars. On my personal score board, it gets a 5 out of 6 possible. It's very good, highly recommended, but I have a few that are better.

I received this tin in a trade and just recently opened it, however it is now almost gone. Like most SG tins, this comes fairly moist, and needs some time to dry out before packing. The tin packaging says nothing about the make up of its contents, but its quite obvious by the tin aroma it is a Va, with a touch of Perique. I smoked several bowls of this, and detected something I have never came across in a VaPer. It wasn't until I read that the Perique in this blend is aged in Sherry barrels did I realize what that flavor was. No detection of Lakeland essence in this blend, just a great Virginia flavor with a slight hint of peppery Perique. I enjoy that back-sweetness from the Sherry. Leaves a clean sweetened palate. I see no reason not to smoke this all year around, not just spring time!