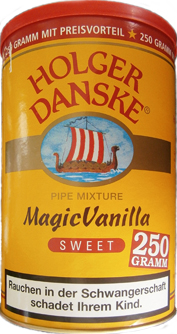 The unlit mixture has a sanguine smell to it where you can detect both the vanilla with a sweet fruit like addition as well. The moistness is of an impressive amount with it not being too much or too little. The mixture is a good distribution of the different sorts of tobacco to look at, being a mostly black Cavendish with about 40% Virginia/Burley.

This is superb in the area of lighting, it gets going on the first touch of the flame and stays lit well. As it burns down what you get left behind is a very white ash in the bowl whilst all along the smoke given off is delightful! There are a few reasons for me using the word delightful, firstly temperature, quite a cool smoke throughout. Next point is tongue bite, not any all the way through. Flavour? Perfect: I get a very sumptuous Black Cavendish sweetness and a beautiful/soft Vanilla aromatic taste while in the background there is a pleasing zesty addition of oranges (not at all harsh, only a hint to bring some liveliness to it). Vitamin N is again great, think Orlik Golden Sliced level. The room note is quite heavy, but pleasant as it is mainly Black Cavendish sweetness with a slight Orange smell too. Due to the aromatic side of it the pipe can gain a ghost if over smoked so maybe dedicate a pipe to it. Other than that this is a really high quality aromatic to sit and relax with!

Am enjoying this one. Great aroma from the pouch and when lit. Very impressed with the quality of Magic Vanilla: moisture level for me was just right, needed no drying before filling and lighting up, burned very well, zero bite, not over-hot, loads of aromatic smoke, few relights, just a little tamping needed, negligible moisture/gloop at the end. Think I'm tasting sweet Virginia & nutty Burley along with the Cavendish smoothness, and also the sweet topping, which IMO enhances the flavour overall. Maybe a little bitterness in the taste towards the very end, but the bowl was near as dammit finished anyway. This is my first try with a Holger Danske tobacco & my impression is those guys know their stuff, if this baccy is anything to go by.

It burns pretty well and it is very dry for an aromatic. Produces lots of smoke. Medium-low body and the aromas are very slightly. It is not harsh, very clean flavor. An everyday aromatic. I would buy it again.

Orange and vanilla for sure sweet and creamy and no getting away from the fact this is an aromatic tobacco. Nic content is mild and this may bother some. My sample was dry for smoking as it came it loaded and lit well but needed a couple of goes to get upto speed. Through the bowel it needed careful tamping and some more lights.

I find you get instant flavour then more base tobacco for the first third after this the casing shines and the whole thing ends well with little moisture and gunk.

For me this is a fair tobacco and I would give it a try however I would take sunday fantasy over this as I find it is a more complex and tasty tobacco. The magic vanilla is a slimmed down version in my opinion.

A very mild and pleasant tobacco in the beginning with a distinct vanilla and orange flavour. Maybe a little to sweet for me personally, it can bee the creamy orange. I don't know if I will purchase it in the future. I have three pouch of it, but maybe not. The Black Cavendish is highly notable, lesser Virginia and Burley also in this aromatic mixture. Later: Now when I have smoked the hole bowl, I find it not so pleasant, the fermented Black Cavendish talks smoothly but the Virginia/Burley stings a little bit as you smoke it further down the bowl of this pipe, but still ¨ rather nice ¨ anyway. Lets change to my other Angelo pipe. Second bowl: but still I think its to sweet as I indicated befor. Change my mind after bowl nr 3 Goast in the pipes, surprisingly nice blend. Later: Boring. Ok I was wrong when wrote Later: Boring. Its a good Vanilla tobacco for the price.