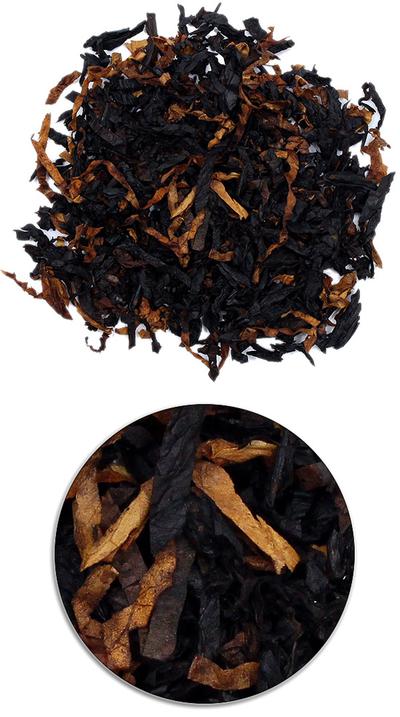 If you like whiskey and black cavendish, this is your blend! Add in Virginias and burleys to mix and you've got a smooth smoke sure to relax.

I decided to try this one after being turned on to whiskey aromatics by Holger Danske Black and Bourbon! Firstly, the unlit aroma is quite a pungent one, being a little heavy with whiskey for me! The pieces are fairly robust in their sizes and it is about 80% jet black. The first negative is that it is somewhat over the top with the moistness, so a short airing period is definitely a good prerequisite to use with this blend! I leave a bowls worth aside for only about 2 hours and after the short drying time it lights up superbly and then delivers a burn that is unequivocally even and consistent. The flavour is not as harsh with whiskey as I anticipated it to be: the whiskey is a formidable additive but it gives a more subtle flavour than a raucous one which works lovely alongside the natural sweet taste from the black Cavendish. To be fair the least discernible tobacco is the Burley, its a taste you have to search for , the Virginia is a little easier to acquaint and is of a nice quantity for me. Vitamin N? Wonderful amount: not strong, not weak. Tongue bite? Nonexistent (but we all vary with that). The room note is mainly a Cavendish one with a very detectable whiskey side to it but it is also quite full so I presume it would be a touch offensive for non-smokers in the vicinity!

I give this two stars for the subjective reason that I feel the flavour becomes tedious after a while.

I can’t add substantially to the previous writers ... I truly enjoy the craftsmanship of G&H & enjoy their English blends ...I do not find it excessively moist & did not require multiple re-lights .... I tried this as an alternative ... yes it is “elegant” as one reviewer writes ... smooth & has the stellar quality of G&H crafting ... I smoked it whilst @ the Symphony recently on intermission & passers-by remarked @ the ambrosias... seems to be Cavandesh forward w/Va a great supporting role ... the whiskey is there but not obtrusive... I enjoy it & recommend it! Since I quit drinking (for all the usual reasons) I was pleased w/the melding process ... try it !

I was very impressed with Gawith Hoggarth’s Top Black Cherry, but for as much as I enjoyed that blend, I was really let down by this American Whiskey. I too noticed a bit of a bitter flavor and some sourness too. The tobacco appears to be of the usual top quality from GH, but that is the only good news here. There are lots of great tobaccos out there with added spirits including GH’s Sweet Whiskey rope, but this isn’t one I’ll be smoking again.

I normally don't do one bowl reviews, but when I first started pipe smoking this was one of my regulars.

It was easily available from a shop in my local town, then the shop shut for 6 months then reopened but with a vastly reduced selection this been one of them that didn't make the final cut.

So it went by the way side as I found other tobaccos that where to become my regulars.

On ordering some more ennerdale curiosity got the better of me and I decided to throw a tin in for old times sake.

So as you can see it is an American style aromatic, very cavendish foreward with a helping of burley and bright Virginia.

This stuff is seriously moist on opening, and the first thing that hits the nose is a nice vanilla and caramel scent, but ruffle the tobacco and the whiskey takes centre stage, let me tell you the blenders at gawith and hoggarth certainly wernt shy when the drana for this where handed out.

So packing wise it is a relatively easy affair, the Virginia and burley are in nice longish strands while the Cavendish is nice and chunky, as I said this stuff is seriously moist but funnily enough lighting up is a breeze.

The vanilla and caramel do carry over to the smoke but not as strong as when the tin is opened, again the whiskey takes centre stage.

it reminds a little bit of bells whiskey, as when smoking I get some nice toffee caramel notes, a little ginger bread here and there and a slight Smokey more that if you don't concentrate, you will miss it.

While smoking there is a nice just ever so slight bitter note, very much akin to dark chocolate or an esspresso, it's not a bad thing as it adds a nice dimension.

given how moist this stuff is, it remarkably stays alight with ease and took only two delights throughout the smoke.

the whiskey taste does stay through out the smoke, the vanilla caramel note fades slightly during the second half, but is replaced by a nice caramelized sugar/oaky taste.

The smoke itself is very smooth with a slight touch of creamyness but my god does this tobacco have some smoke output, even the gentlest of sips produces plumes of smoke, not a bad thing for me but maybe not one for those sensitive to smoking.

Which brings me to the room note, very nice, slightly sweet with that ever present whiskey note, it shouldn't offend many, but do bare in mind what I mentioned earlier about the smoke output.

Nicotine wise, as with most aromatics, unless you have a very low tolerance, this will be a very comfortable all day smoke, I found it's strength just a couple of steps past mild, even though I smoke much stronger heavier blends I still found it a satisfying smoke.

All in all this a very decent smoke, and one I shall keep around on a more regular basis.

yes the Virginia and burley is sublimated to an extent due to the added flavours but they add just the right touch of flavour to compliment the blend.

I would say in my opinion, having liked borkum riff bourbon, this trumps it, it is much more refined and no rough edges, harshness or bite.

I really tried to push one and it barely heated up.

The tobacconist insisted that I try this blend, and I decided to give a try although I am not into Cavendish aromatics. I’m a huge fan of GH, but the blends I like (Ennerdale, Bob’s Chocolate, Balkan Mixture) are all in a different typology. I feel, though, that here too GH succeeds in making something unique with their personality. This is my second trial with GH’s “American” blends, the other being Cherry & Vanilla.

The blend seems to employ a rather different concept of Cavendish than is usually found: only slightly sweet, it is not sweetish or goopy. The resulting smoke is rather fresh and light, without any tongue bite. The flavouring is very light. I may even say too light, others might say too bland. What I perceive is a rather neutral Cavendish, a good Virginia, and just a hint of whiskey. I bought it loose, and the moisture was perfect, although a little drying may help. Rather light in nicotine content, it is perfect for a relaxed moment when smoking does not require all my attention.

I’m not planning to buy more of this blend anytime soon, but this one would be my choice for a whiskey aromatic. It is light and balanced. Nothing is over the top. I would classify it as “elegant”.

Age When Smoked: Fresh from counter

Bought a bag of this for my girlfriend's dad whose into all liqueur based tobacco. While not a huge drinker personally, here is what I thought... The bag gives off a nice boozy plume that you can taste in the back of your throat, not unlike a snifter of actual Whiskey. The sweet tangy huck it gave off could easily be mistaken for a Cherry Aromatic, so get ready for flavor country. So will smoking it mark the end of prohibition and get me on the wagon?

The Cavendish forward cut was nice and beefy, about a step below a broken flake, had some sticks here and there, and a hint sticky. Honestly, it felt great and packed how I like em' to. Once lit, any thoughts of Cherry went up in smoke, leaving what I imagine a drink might taste like when an alchemist turns liquid to vapor. While GH&C's American Whiskey certainly performed at higher level than other cheaper brand Whiskey tobacco I've had, and even allowed the natural leaf taste to come across, it was not the kind of Aromatic I enjoy. Falling into a rough, yet not deep, smoking experience.

It did burn nicely all the way to the bottom without bite and had a somewhat heady effect, so maybe the topping did get into my liver and inhibit and the blend found a way to inhibit my driving after all.

Nice flavour of the sweet whisky casing. Generally very sweet and round, but you might as well buy some Werthers Original. I do miss other flavours than the casing, so this is not for me. As far as a mild-tasting American style aromatic goes, I guess it's perhaps what you'd expect. It is not a strong tobacco in terms of nicotine, but because of its mild taste, it is easy to forget that the nicotine hit is not far from average. It is wet and leaves some moisture in the bowl, but that's only to be expected from a this blend style. Tricky to light due to moisture level. No bite whatsoever and no foul taste. But what is there to love, really?

Try it if this is your type of blend, but as always I advice people to try a Danish style aromatic instead of an American style. Those are much less sticky and wet, and therefore deliver cleaner taste, both of the casing and the underlying tobaccos. Try for instance Solani 131 Red Label.

As for me, I never finished the pouch I bought, as this is not really my cup of tea. And since none of my pipe smoking friends want it eiter, It goes in the bin. Need the jar. Harsh, but we're talking pure cost-benefit analysis here.

Age When Smoked: From fresh to six months old

Similar Blends: Appears to me as virtually similar to, Mullins&Westley LTD - Highlander's Choice, which is sold at Segar and Snuff in London. According to the man behind the counter, Highlander's Choice is blended exclusively for the shop by... yes, GH&Co. If there are any differences between the two blends, apart from the name, they are only very subtle..