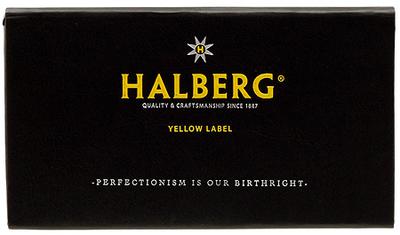 From three continents Mac Baren has gathered hand-selected Virginias and Burleys for this blend, then dividing them into portions that will be ribbon cut, cross-cut, or pressed and cut into flake, before all finally rejoining each other to produce balanced burn qualities and complex natural flavor profile. The results of this are then topped with a careful dose of fruit and vanilla aromatics, to create one of their finest artisanal blends.

More cross-cut and broken flake than ribbon, but burns reasonably well all the way to the end of the bowl with no harshness; cool, clean, and smooth. You get the full taste of various fruit flavors, including apricot, berries, cherry, lemon, and maybe a hint of mango. The black cavendish adds a very complimentary sugary vanilla taste that provides a light bass note without competing for taste. The various flavors one normally expects from lemon yellow (citrus and grass) and brown Virginias (earth and dark fruit) are present, though subdued by the toppings. The burleys are mildly earthy, mostly sweet and slightly nutty. I get a little less of the berry notes, and more of the citrus than I do in the Red and Green entries in the series. Not one hint of a chemical taste exists here. Won't bite even if pushed, and leaves little moisture in the bowl. Needs a few relights as it's moist. Doesn't have much of a nic-hit. The after taste is okay. Not quite an all day smoke. Presented within one of the classiest boxes ever designed for a tobacco product.

I picked this up about 2-3 years ago. I got through about half the 100 grams and then jar'd it up. Now I'm finishing the jar of what's left. The moisture level is just right, probably because it originally was opened in packaging for about a week or two before being jar'd. The cut packs pretty well and takes a char and true light very well. The Va's are a bit citrusy, a little fruity, and on retrohale can be a bit bready. The Burley's are a bit nutty and earthy and have a faint chocolate note. The top dressing has fruity notes that compliment the VA's. The vanilla is barely noticeable. Like most Danish aromatics the top dressing is rather light and more of an accent to the leaf flavors. Keeping the palate moist and taking your time with this blend will help avoid the dreaded "Mac Baren McBite". If you're looking for that one aromatic to have around other people give this one a go.

I hadn't been too excited about popping this one, I've not found the others in the Halberg Aromatic series to be anything exceptional; but, seeing as I'd bought all three, with this being the last one, I thought I'd give it a go.

Like the other ones in the Halberg Aromatic range, it's packaged superbly: a roomy box; giving space for the blend to breathe. Then it lights easily and gives a good burn. Up to now it seems similar; let's look at the actual smoking quality:

I quite like this one. The expected tastes are all present: citrus, fruit, and a hint of vanilla, but it's a nicely rounded experience; there doesn't seem to be much sharpness nor acidity.

I was concerned that this, like the other two, was going to burn hotter than the pits of Hades, but to my surprise, it doesn't. Without a doubt, this is the cooler of the three; I had to swap to a cob halfway through my first bowl of Halberg Green as I feared my Nording's finish would bubble and blister, but this causes no worry at all!

The nicotine amount is similar to the others: about medium. As is the room-note: pleasant.

This is quite good, probably the best of the three, but like the others it's nothing exceptional so it doesn't deserve full marks!

I'm going to go against the grain of the other 2 reviews, although it pains me to disagree with JimInks. I actually found the Yellow to be the most satisfying of all of the Halberg's. It actually had a nice decently strong aromatic taste and room note. It was good all the way to the bottom of the bowl. It's a little weak, but mixing it with some C&D cube cut burley fixed that.

I m from iran and can reach just European blends. i used to smoke non aromatics must because of tongue bite but this one is a mild and aroma blend.

I was given a sample of this by the only other person to review it to date. That being the esteemed Mr. Inks. I am also giving it two stars based on my experience with it.

I really didn't like this blend. The topping was almost revolting to me. Jim's review lists about 8 or 9 flavors if memory serves me right. I am not as good at discerning these flavors as Jim is, but I do know, that to my palate, the flavors became a muddled mess and was close to unsmokable to me.

The saving grace to me, was the underlying leaf. After about half bowl the topping takes a back seat to some good tobacco flavor that makes the rest of the ride more enjoyable to me. Taste is very subjective with aromatics and toppings, so someone could really enjoy this blend. To that smoker I would suggest CAO's Moontrance as I find it a better representation to what this blend is trying to accomplish, but you may favor this one.

I won't give it a one star as I reserve that for blends that are completely repulsive and this one doesn't quite make it there.