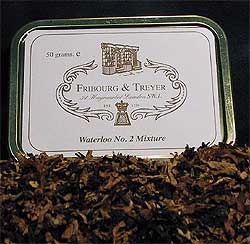 A mild English blend of Virginias and latakia.

Appearance and Tin Aroma: Looks like Squadron Leader in the tin with medium width ribbons of lemon, brown, and dark leaf packed tightly in the tin. Smells more like a VA dominant blend in the tin with the latakia well in the background. it also has a spicy, pungent odor uncommon to English blends but more akin to a VA blend.

Packing and Lighting: The moisture is perfect out of the tin, but is a hassle to get out of the tin when first opened. After about four bowls, the packing loosens up. Lighting is 2-3 lights max.

Initial Flavor: This tastes like a typical F&T Va dominant blend. Its German processing influence is noticable. In their Va blends it is quite delicious, but here, it tastes out of place.

Mid-bowl: This is, unfortunately, a harsh tasting blend. I can't seem to get it in the zone where flavor and temperature are in balance. There is almost no sweetness in this blend either.

Bottom of Bowl: I am actually glad when it is over because of the battle (pun intended) I had with this blend every bowl. It ends dry with mottled ash and with some strength build up, but nothing that will draw me back.

Overall: First, I have to say that I really enjoy some of F&T blends such as Virginia Cut Plug, etc.. Unfortunately, Waterloo did not do anything well for me. It always bordered on tongue-bite and when not too hot, had a harsh VA flavor with no sweetness to offset it. i won't be buying anymore of this blend and I can't say I recommend it. Stick to Chonowitch's T-16 instead for a delightfully complex light English...

A Virginia dominant Lat/Va blend. The Virginias have a decent flavor and a minimal amount of sweetness. They also are "wannabe" biters. They seem to want to bite, but they never actually do. This has the annoying effect of keeping me on edge while smoking this blend. Not conducive to relaxation. The Latakia is just in too small of a proportion to be much of a factor here. I can't recommend this blend.

To say that Fribourg & Treyer's 'Waterloo No.2 Mixture' is the best German pipe tobacco that I have smoked (which it is) is not saying much. All German weed that I have puffed has a harshness that is bloody nauseating. It is this same factor that causes a knot feeling in my throat--a consistent feeling with German offerings. Without this harshness (and with this product is it the least harsh of any DE rope), this would easily be a 3-star tobacco. As it stands, though, I cannot go beyond two (even with the great billows of smoke this produces). 'Waterloo No.2 Mixture' is worth a try, but not worth keeping around.

The hydration's good, the same size tin as Dunhill now use aids decent smokeability. The aroma from the tin seems a little light for a Latakia/Virginia.

Without doubt the Virginias account for the primary flavour. At first the Virginias completely smother the Latakia, it takes a while to be able to identify any Latakia. At no point is the Lat' a 'driving force', at best it gives only a delicate woody-smokiness, but, that delicate note is just enough to attest its presence. On the negative side of things it can burn too warm and fast, so it necessitates a gentle technique. It can bite.

Waterloo No.2? Would make a good entry blend into the English field. For my palate, though, I want much more from a blend containing Latakia. Two stars:

My review is based on about a half ounce sample of some with quite a bit of age on it. So take it for what it's worth. The amount of Latakia here would be consistent with that of a light/medium to medium English mixture. Surprisingly, the Virginia's don't seem to have gained much sweetness from the aging process. I am going to toss my hat in with Sir Pipestud and the leaf seems OK but not top shelf. The burn and pack are both with ease and it burns cleanly. It didn't bite me but it can be “warm” if not careful. There isn't much complexity here either, but the softening of the small amount of Latakia in the blend may have contributed to the result. Waterloo isn't bad a bad blend, but just not interesting enough to lay out a few bucks for more. Two and a half stars.

Not a particularly heavy Latakia flavor here, but certainly enough to perk up the old taste buds. The Virginia leaf seemed a little less than top-shelf to me, and that probably is what drops this to a 3-star blend. There are many similar Latakia/Virginia blends on the market today with more strength and flavor, but this is not a throwaway blend by any means.

Bought some accessories from Iwan Ries out of Chicago and noticed the name more than anything. Saw it was Virginia and Latkia and billed as a mild Va./Latakia mix so bought a fresh tin. Had a nice lunch and had some extra time so to add to the quiet time I loaded 3/4's bowl of the Waterloo in one of my favorite Nachwalter's hand made. I found it to be a pleasant and interesting taste. It surprised me because it tastes to me more like a rich Virginia. There's a subtle hint of the Latakia but if I didn't know it was in the blend I'd be guessing. A favorite of mine is Stokkebye's Balkan Supreme. Robust latakia with super mildness. The Waterloo to me is nice and mild and a robust rich Virginia taste with a very subtle Latakia lurking in the background. Nice smoke, quality tobacco. Smooth and relaxing. The room note is much more tolerable for those around me than the heavy latakia blends. No doubt they will complain about this mix (they even complain on those rare moments when I'm in the mood for an aromatic blend) so if your house is like mine you're likely to get less flak with this even when you smoke outside only like me. I'd give it a sold 3.5 to 4.

Upon lighting my first bowl of Waterloo No 2 mixture I was tempted to dismiss it as an insipid non-entity. What an error of judgement that would have been! After a couple of days of breathing in the tin the mixture acquired a redolence of something like Royalty and a taste of something like Early Morning Pipe. Not quite as rich as Royalty and not quite as manly as EMP, Waterloo nevertheless combines the elegance and charm of both in a muted way.

I think there is a definite graceful oriental presence, and the latakia is gently applied. Excellent as the first pipe of the day, by the afternoon one wants something a bit heavier. I suspect that as with age the appetite for strong sensations wanes, this could well become an all-day smoke.

I'm smoking the Petersen & Sørensen variation here. Nice mild English. Turns harsh when smoked in the great outdoors. As did Napoleon. Blurb says perique, I say menthol. Not enough to smell but enough to make your pharynx comfortably numb. Later I make a mixture of the remaining Waterloo and Banker's from the same manufacture, but I'm not gonna say the name I coin for the crossing.

First off, I have NO idea how old the tin is. It could very well be in excess of 10 years old. It seems I am the only guy in town who is buying anything in tins.

That being said, I rather like this blend. It is very interesting to look at. A medium sort of cut with lots of bright golden strands, medium brown ribbons, and black flakey bits. Advertised as a blend of VAs and latakia it never really defines it self with flavor. It keeps moving the target around, which can either be of great interest, or rather frustrating. When you open, fluff, and pack it, the aroma is smoke latakia, but the smell that sticks to your fingers is VA. On the false light it is 100% latakia for the first puff, maybe two. Then it is gone. It just lingers in the back poking its head in the door from time to time to see if you are still smoking. I kind of like that, rather than the HEY! YOU'RE SMOKING A LATAKIA BLEND! punch that frequently leaves my with a cold, yet burnt over dry sensation in the back of my mouth. The VAs never get sweet and lemony, but are mellow and have a nice sort of harmonious flow back and forth with a soft and creamy mouthfeel. I occasionally noticed some cocoa flavors, and something floral, and once, something slightly like fresh clean linens. I know that is dumb, but it was there. Haven't smoked it in a big bowl yet, but in a smaller billiard it was very well behaved, didn't require but a few minutes of drying time before lighting, and stayed lit. No bite, no steam, no mess. I did have one little gurgle in each bowl, but I didn't find it to be a problem which couldn't be solved by the quick swipe of a pipe cleaner.

All in all I rather like this mixture. There is nothing gimmicky, or overly exciting about it. The vitamin N is rather moderate, but is enough to take your edge off. Room note.....not so sure. It left my truck smelling of old smoke. But hey, I smoke 4-6 bowls in there every day. Sometimes the truck just smells like old smoke.

It wasn't terribly expensive, and was a comforting kind of mellow smoke, so I say give it a try!