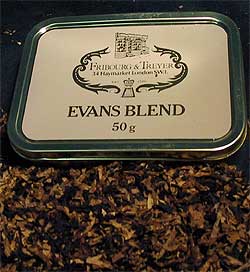 A blend of pure Virginia and black cavendish with no condiment tobaccos.

This was one of several large samples kindly given me at Messrs Davidoff, who stock all F & T compositions.

I was surprised to find this less interesting, less vivid than GOLDEN MIXTURE. That tobacco has an excellent sweet tang, without bite. I thought this would be similar, but with some added body from the stoved. Not so. It is duller, and still on the shallow side as flavour goes. There is nothing offensive about it: it has good finish and first-rate burning qualities. It just doesn't taste like a hell of a lot, and, as a light experience, I prefer the GOLDEN.

edit to the review - the EVANS BLEND

Fribourg & Treyer of 34 Haymarket, London sold snuff and the best quality at that. But, a partnership between a Mr. Fribourg and a Mr. Treyer had never existed. The firm was allegedly started in 1720 by P. Fribourg, although the earliest surviving ledger is dated 1764. It is not clear whether the same P. Fribourg was in control of the shop all those years, or whether more generations had the same initial. According to Evans, the Fribourgs had originally come from Switzerland.

From a tax assessment record of 1767 for the St. Martin in the Field parish, it is certain that a Peter Fribourg was paying taxes for a property in the Haymarket. He retired in 1780 and the shop was taken over by G.A. Treyer who linked the – no doubt well-known and highly esteemed – name of Fribourg to his own.

Gottlieb August Treyer, originally from Germany, had married Martha Evans the same year he took over the snuff shop and was granted naturalisation in 1793. The couple had no children and when they retired in 1803, the daily management was put into the hands of Price Evans, Martha’s brother, during the minority of the three sons of Richard Evans, one of Martha’s other brothers. By 1815, Martha and Gottlieb were both dead and the two nephews George (1786- 1867) and Gottlieb August Treyer (1789-1869) were old enough to manage without their uncle. Later, they were joined by their younger brother Robert Lloyd (±1803-?). This partnership was dissolved in 1858 in favour of the next generation, Gottlieb August Treyer junior (1818-1899), the son of G.A.T. senior, George Arthur Carter (1833-1887), son of George, and Price James Evans (1815-1885), the son of James Evans, a cousin of G.A.T. senior and George. After the death of these three cousins, the firm was then managed by August (1843-1906), son of G.AT. junior, and George (1867-after 1920), the son of G.A.C. Evans. August died in 1906 and the firm became the responsibility of George and August’s son W. Bridgman (1876-after 1920).(4)

Lightweight and powerful Virginia tobaccos with Latakia. As a special feature, a relatively high proportion of the Orient was Tobaccos added. This is a very special and exquisite blend. Light and yet aromatic.

It was once a tobacco, that would be today called a Balkan. Because of the very stout orients. Silly but times changed.

I had the pleasure to smoke a tin of the 70th. It was the best tin of English Mixture orientdominated for me. Almost no sweetnes.

Light in Nicotine, but incredibly aromatic. Have never discovered what comparable.

It was a five star

Similar to F&T Blackjack and Vanners Mixture in that it has little nicotine strength, and the fullness of the Black Cavendish & Virginia has had the foot taken off the pedal.

In the tin the black Cavendish appears to be a little outweighed by Virginias. The ribbons have been well rubbed and it's devoid of any twiggy pieces. The aroma's a simple, sweet Virginia, one, and the moisture's decent.

The smoke? As it has no real fortitude, or preeminence, it could be perceived as being boring. It isn't bad, just a little insipid! The Virginias form the majority of the smoke. In all fairness they taste good; more red Virginia fruitiness than bright Virginia sharpness. There's also a spot of breadiness from the Virginias. I note a touch of sweetness from the Cavendish, but no heavy gloop from it. Mine has burnt well, going evenly and leaving no dottle. But, I recommend a gentler technique to prevent the smoke becoming too warm.

Evans Blend? It seems a bit nondescript, I couldn't identify a position in a rotation for it. So, it achieves two stars:

Sand to black ribbon with a tin nose of a sugary Cavendish on top of a very light tobacco aroma. Smelled more aromatic than non. It came pretty dry in the tin which was a big plus.

In the bowl, the red and lemon Virginias were pleasant tasting, with a very light sweetness and the Cavendish added a little sugar but little else. I did not get "vanilla" or anything specific as far as flavoring so I assume this is basic sugar-processed Cavendish without extra sauce. It smoked very dry with no goop and left a fine white ash at the bottom. Overall it was nice and inoffensive but nothing much to relish. It was only when I tested its mettle by puffing a bit more authoritatively that this one showed its strengths. While it is often true that tobaccos should be smoked slowly to get the most flavor from them, it is also often not true in my experience. With some blends, cooking them at a bit higher temp yields some massive improvements. This one reacted so. With a cadence fairly well above sipping, this one did not bite, turn harsh or go into "cigarette mode". Instead the Virginias became more prominent with the Cavendish receding just a bit and the blend turned more robust and fuller of flavor. Definitely not a complex blend, but this one showed some serious depth when puffed faster. I hasten to add that truly quick puffing got this one hot and bothered, but on the other hand slow sipping turned it into something to dainty and wispy. A happy medium really made this one shine and took it to 3.5 star territory. The Virginias played better together while not trying to lay too far back or outdo one another. The blend became sweeter as well, even though the Cavendish move to the rear. All in all, this blend is very good but not a rotation maker. Nicotine hounds should puff faster, although this probably still won't satisfy fully. Try it if you want two blends in one.

This is a pretty good smoke. It appears to be red Virginia ribbon with bits and strands of darker Cavendish. I like it better than Vanners but not as well as Golden. It has a very mild Virginia effect with a neutral sweetener, probably from the Cavendish. It burns a bit quickly although not as fast nor as hot as Vanners. If you bought a tin of this, you will probably smoke it with no hesitation. It also, I think, does not deliver much nicotine which may cause the smoker a tendency to puff a bit too fast. It does not bite so it may be just the ticket for someone starting out on Virginias. I'll give it three stars because I enjoyed it. However, it is not distinctive enough for the price that I would buy it again.

Well, I picked this blend up because it sounded good and I have to say that I loved it. It was mild for sure like the last review said, but it did taste great in my opinion. I used it to break in a Randy Wiley bulldog. I dont know for sure, but it was either the pipe or the tobacco that was exceptional!! I have smoked this blend in other pipes as well and it is always good. It burns great and has a nice white ash all the way and the flavor is exceptional. It is very slightly sweet with the virginas, and needs to be smoked slowly to avoid bite. I would recommend this 100% and would wonder how it would be with a few years of cellaring! 4.5 out of 5 and highly recommended!

I bought Evans Blend because I think highly of Frebourg.

Most of all I liked Vanners.

This one also contains pure red and gold Virginia, in addition to Black Cavendish. It is quite dry leaving behind beautiful white ash in the end. The bad thing is that it dries very fast (this can be a good sign; lack of preservatives). It needs calm smoking in order not to create any tongue biting.

Quite high consistency in nicotine.