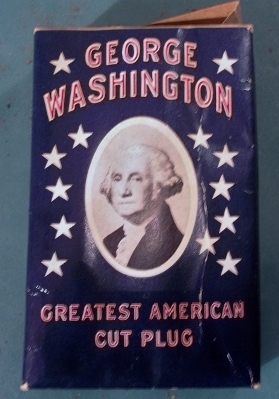 Tin has no description except picture of George Washington and the phrase "Greatest American."

Notes: Made by R.J. Reynolds Company, tin tax stamp dated November, 1941. This and the Prince Albert blends were made by R.J. Reynolds Tobaccos. Now, the R. J. Reynolds selection of pipe tobaccos belongs to Lane Limited, USA. Last seen on drug store shelves in 1974, though the actual date of discontinuation is presently unknown.

It's too bad this hasn't been made in the last forty years. The last time I saw it for sale was in early 1975, and the first part of this review is for the 1970s production. It has a sweet molasses taste reminiscent of Carter Hall, along with some earth, wood and nutty notes, but it's a little stronger than CH with a mild sharpness, though it doesn't bite. It does sport a couple rough edges, so I recommend a sipping pace if you ever can lay your hands on this blend. I don't believe there's a touch of red Virginia in here, but there's a little tangy note here that is reminiscent of what RV does. It also has a slight spice hit. The Virginia is a background player, and is slightly citrusy and grassy. The nic-hit is mild. Burns a tad slow, but well, with a very consistent semi-sweet, slightly savory flavor. Leaves little moisture in the bowl, and needs an average amount of relights. Has a pleasant after taste. An all day smoke. Three stars.

In older versions, the cut of this blend was thicker and coarser, much like today's Edgeworth Ready Rubbed Match. That burned slower than the later ribbon cut (see above paragraph), and was a mite less sweeter, and a tad more savory and woody. It was also a little stronger and rougher. Those versions get two stars.

I used to smoke GW back in the late 1960s. I liked it pretty well, probably better than Prince Albert, though PA was easier to find. GW was a nutty Burley with (to me) a better room note than PA, though both were good. Jim's review describes the flavoring as molasses, and I'm thinking that's a fair guess; that is how I remember it (PA, also). It was quite good.

The GW base was -- according to C&D's Bob Runowski -- a dark, rough-cut burley also used in Granger, Blue Boar and many other burley blends. Bob wrote that that leaf became increasingly unavailable in the mid-60s as tastes changed to prefer lighter flavors. Well by God, mine never did.

Lawd, I wish all these old blends like GW, Blue Boar, Edgeworth were still around. I miss them a lot. There are some great, great burleys around now, but the older ones that we've lost had something hard to replicate now.

Pipe Used: Cobs, all I had then

I was fortunate to snag a sealed 14oz tin from an antique store, and was able to successfully rehydrate and smoke some.

The tin note is incredibly raisiny, and no off smells were detected. The tobacco lit well and required few relights.

The flavors present are not very complex, but hints of molasses/brown sugar are definitely detected. The virginia leaf comes through much more than the burley, but it could very well be that my palette is not used to detecting the stronger type of burley frequently used in the 60s.

Overall, I would describe this smoke as nostalgic. Each bowl transports you back to an age where pipers were commonplace. As someone who has a love for history, it’s a treat to experience a smoke from ages past..That said, it’s not something I would smoke every day.

If I’m basing this review objectively on the tobacco, I’d give it 2/4 stars. The novelty alone though makes it a rare treat!