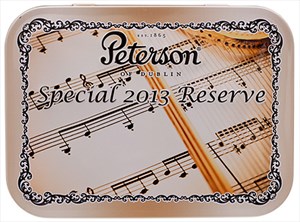 Exclusive hand cut Virginia flake togehter with sun yellow and mahogany coloured Virginias are combined with dark cut cavendish which gives this tobacco an amazing appearance. Fruity flavours of exotic passion fruit and juicy peach makes this blend a symphony for the senses.

I agree with most of the previous reviews. Although I had the tin left open for several months I did not notice any decline of flavoring since I opened it. A nice aromatic (of course you must like aromatics!) with a smell of fruits (caramel?) and an acceptable room note (important!).

I must admit, this was one of those 'bought by mistake' blends! In truth, I never properly read the description so I hadn't realized it was a fruity aromatic! I popped it in my tobacco cupboard and forgot about it until today when I stumbled across it whilst reaching for something else. I thought to myself, "stone me, that's been in there a while, I may as well smoke some of it today". Surprisingly, it's better than I wrongly assumed.

The aroma from the tin is VERY fruity, to the point where you'd have to be a total idiot to not be able to identify the casing used as being fruit. Mines of a good moisture but then again, it has had a few years in a push-clip tin so it may have been damper at the beginning.

Once it's lit, the flavour is exactly as the tin note lead me to expect; it is heavily cased with fruit and citrus without a doubt. Some folks may find the added flavours to seem a touch occluded, but then, on the other hand, outright aromatic lovers will feel right at home with a bowl or two.

This is one of those aromatics that's so heavily cased it excludes any of the natural tobacco tastes. As I said, it's one for outright aro' folks.

To finish on some good points: it gives me no bite, I get a cool smoke and it burns well.

It's not my usual kind of blend, but I think it deserves to be rated objectively: recommended.

Age When Smoked: A few years

It starts with apple, maple and pepper. After two or three puffs, it becomes spicy, VERY spicy. When it comes in half, it becomes acid in a very unpleasant way.

It's a wonderful mix of Virginia and Black Cavendish. It was a nice top dressing of peach and passion fruit. It smells like peach schnapps.

The blend does come rather moist. For the best smoke load the pipe and let it sit for fifteen minutes or so before lighting it up.

Once at proper moisture level it takes a light fairly well and burns rather even and smooth. Because it's mostly a Virginia blend it will burn a bit hot, but hasn't bitten me yet (I'm about six bowls into this blend).

The flavor is nice. The peach and passion fruit are strong on the initial light up and mellow out as the bowl gets burning. It's not overwhelming flavoring once the smoke gets going. Also, I get a nice sweet Virginia taste after the peach and fruit come through.

Overall I find this to be another quality aromatic offering from Peterson of Dublin. As usual a quality different yearly offering. If you're an aromatic fan I definitely recommend picking up a tin.

I normally smoke aromatics in the evening because then my wife is in the room and she hates my favourite Latakia tobacco's ! This Tobacco is a very mellow kind of one and very pleasant for the whole duration of the smoke withe a taste that is somewhat changing to the end of the pipe. Very pleasant room note (refering to my wife comment's) ! I have to say that up till now the various special edition's of Peterson were all very good smoking and quite mellow tobacco's, this in contradiction to Samuel Gawith's special tobacco's with sometimes very good stuff (the 2013 edition) and very bad stuff (the 2014 edition).

Very nice, flavouring maintains throughout, and smells nice in room, i am running a bit low on this. I wondering if the summer blends, aka the 2014 summer time will be similar to this one? I seem to be a picky smoker, moved from cigars to pipes, this is one of the only ones i like along with petersons perfect plug.

I picked this up recently and gave it a try. If you are into aromatics, this may be one to pick up. The tin note and room note are very nice and it should get some compliments from those nearby. It seems to be one of Peterson's better attempts at an aromatic. Recommended.

Same tobaccos as in Summertime 2013, different flavourings; BETTER flavourings... Nothing else to add from my previous summertime 2013 review except that the flavours are peaches and passion fruit... DELICIOUS.

Update: This is crap. Why? A few days after it's opened, the flavours fade away (I mean really!)... And one is left with so little Virginia and so much Cavendish it makes one wish their tongue did not exist! Bites and distasteful. First tobacco to have ever made me change my views so radically...

I bought this on the recommendation of the tobacconist. I do not like too much aromatic blends, but this is very soft and not overwhelming. Despite the smell when you open the tin (actually inside there is a plastic bag), no artificial chemical taste is found. You'll find some fruity tastes, nothing similar with the typical (and disgusting for me) cherry flavor. I would recommend it to those who do not like the flavorful aromatic blends.