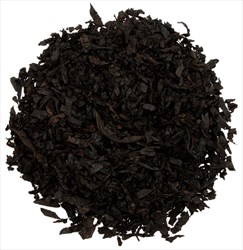 An all Black blend flavored with cinnamon and nutmeg. Same tobaccos and process as Century Black Cavendish.

The sugary unsweetened black cavendish also has a touch of toast. The vanilla topping is the major topping, but isn’t very forceful in strength. The cinnamon and nutmeg are condiments. The nic-hit is extremely mild. The strength is just past the mild to medium mark while the taste is tad past that. Won’t bite, but can get hot on the tongue if puffed fast. It has a slightly slow burn rate with a very consistent flavor. Leaves some moisture in the bowl, and requires some relights if you don’t dry it. Has a pleasant, short lived sweet and lightly spicy after taste. Can be an all day smoke.

I found this tobacco somewhat disappointing. I was able to pick up the spice early but it soon disappeared. As it disappeared nothing pulled through to make for a good tobacco experience. The smoke was relatively flat with nothing to thoroughly enjoy about it. It burned cool and through to the end . If your looking for something a little better in flavor and that brings through the tobacco a bit more, go with the sutcliff baklava. It is better on the spice front and in pulling through an enjoyable tobacco experience.

Thought I'd provide an update to my original review. I let this sit for about four months and gave it another shot. In all fairness, it was a decent smoke with a nice even burn throughout. Still light on any of the noted flavors pulling through. I can't discern them. But, it is a light pleasant smoke you could knock back all day. Based on that I have adjusted my original review/rating upward a bit. This would be a good newbie tobacco for something to start out on without the worry of tongue bite. Seasoned smokers may find it a bit uninteresting.

Age When Smoked: New and 6 mos.

This is a surprise not what I expected. I do not detect any of the spice that they say has been added. Not in aroma from the pouch or in the room. The room note is ok. If you smoke this blend slow you will get a sweet taste mid bowl. Smoke it fast and it becomes harsh. Overall it is a ok smoke not sure if I will buy it again, probably not

If you buy this don't expect a broken flake where the pieces are so big and flake-like they need a rub, the blend's made of mostly very coarse ribbons, with just a few 'clumps'. The colour's extremely dark, and moistness is A1.

For the initial part of a bowl the spices dominate the smoke; mainly cinnamon. But once that time has passed, after about a quarter bowl, the nutmeg enters: sweetly nutty, but also quite savoury. A strange addition, but pleasant nevertheless. I'm not a fan of one of the other traits, which increases in strength toward the end: floral. B21 burns steady, not requiring re-lights, but unfortunately goes quick. The temperature of the smoke's cool, and it's quite thick in build.

The room-note isn't my idea of nice, and the nicotine's mild.

The first quarter's a 3/4 star smoke, but the remainder only warrants 2 stars.

I bought several one ounce aromatic samples from pipes and cigars to try and see what had good flavor and room note out of the thousands of aromatics out there. I thought this would be the same as Tinder Box's Black Russian which has nutmeg etc, Well this was not like that blend and was not great, it did smoke cool, didn't gurgle and had decent flavor I guess for what it is but like my fellow reviewers I did not taste spices whatsoever. Therefore two stars since in my book a blend called "Black Spice" should at least give the smoker at least a suggestion of spices.... A Ho Hum blend if there ever was one...

Age When Smoked: Fresh from Bulk

Similar Blends: Captain Black Dark, BCA, McClelland VBC - well ok any of these are better than Black Spice but they are all black Cavendish's....

I was hoping this might be the mysterious and fearsomely strong spicy black Cavendish sold by a local tobacconist as "Zulu" (likely renamed; not HU Tobacco's Latakia Zulu). Alas, my search goes on.

In the ziplock bag it smelt quite spicy. Smoking, the topnote is not so much spice as floral—too floral for me. Artificial cinnamon flavour, maybe? I didn't taste the nutmeg. After a relight or two, it smokes smoothly, without bite.

Overall a good tobacco with a bit more interest than an unflavoured black Cavendish; but not quite my preference. I'll probably use it for blending. Hmm...I wonder what 30% Périque would do to it....

Age When Smoked: Fresh in bulk

Not a bad blend and typical of most black cavendish of its sort. For me, more a mild vanilla than nutmeg or cinnamon. Similar to Capt Black Dark and Tinder Box Capt Spice. What I don't enjoy is the chemical taste (most likely PG) which really comes into play by mid bowl. Leaves an after taste of such as well, but milder than most PG laden black cavendish blends. No bite and smoked relatively cool, so not a bad choice for this type of offering; and one that would be good for beginners and for those who want a nice smelling room note.

As I was reorganizing the filing cabinet I keep my jarred tobacco in, I found a 2 oz. jar of Sutliff Black Spice I received as a Christmas present in December 2017. When I opened the jar, it was still moist and/or goopy. I let it sit open for two days to dry out before trying it. I now know why I forgot about it. After four years, the flavors have become more muted and indistinguishable from one another. The room note is pleasant but overall, the smoke is very mild. It may have been better fresh but there is probably a reason why it got lost in my drawer.

Description touts Green River black cavendish with flavors of nutmeg and cinnamon... None of those detected. It was more black licorice. To be honest, this is one of the lightest smoking blends I have ever had. Ordinary toasted black cavendish is better than this. This could be used to 'tone down' a blend that is too strong - but not enjoyed for anything else.

I really enjoyed this atypical aromatic. I bought this from a franchise tobacco store who makes their money off vaping/RYO so Lord only knows how long this had been sitting around. It came a little dry in the jar/bag. smells great and is easy to load and light. I got a pretty fair amount of spice in the flavor but after a few bowls got bored with it. I decided to mix it in with some butternut burley at 50% and that combination really just was amazing. As I type I realize I need to stock up on both, I may never smoke either by itself again.

Probably similar to Consolidated's version of the same tobacco with the same name. I find this one to be a great cool mild all day smoke. Good room notes, though my wife doesn't like this as much as some of the other dark aromatics. I don't see the cinnamon and nutmeg in there really, but I'm not exactly after them either. Once dried properly this burns cool all the way to the bottom. Surprised me when I got some ash actually. All in all a great smoke... the only reason i gave it a 3 out of 4 was that it leaves a lingering aftertaste the next morning. Not real strong, but more than some others. I don't smoke daily, so waking up with pipe mouth is something that bothers me... for most people, that's probably not the case, but for me, it's enough to drop it one star.

Sutliff must have a base topping that goes into many of their aromatics (speculation here) because I can taste and smell "sutliff" if that makes any sense. This smoke is nice, but it's nothing that stands out. The taste was super subtle to the point where I could not point anything out. The room note was nice, but it was more of a general, soft cinnamon and sugar smell, nothing that stood out as a potent spice. Would probably be a excellent base for DIY blending...maybe. However, it wasn't anything special.

I really wanted to like this. It sounded like perfection for a topped black cav. Bag note: Ok. Not quite what I was expecting, more of S.V black cav, or S.Pride black cav, which is fine, but again: "spice". Smoke? The most nasty flavor to date yet for a tobacco in my mouth. Pure 100% playdough. No matter how dry, how hot I fired, bowl size, draw length, etc. Yuck. My most depressing experience to date with a tobacco. Can not comment on room note as I have smoked this one alone. I will continue to experiment with this, as I have 8oz. Perhaps as a blender it will serve a purpose.

As a newer pipe smoker, I am mainly exploring the different blends (I favor aromatic blends, although I am dipping my toes into the non-aromatic blends now) to find what I like. Opening the bag, what I smelled was spicy tobacco, its hard to describe but it wasn't what I was expecting. I really didn't taste any flavors in this, was a bland smoke. I did not have any tounge-bite with this blend.

Really good Cavendish with a toasty flavor. Some vanilla, but not overpowering. The cinnamon is present but mildly noted. I get the nutmeg in more predominant doses. Also detect a bit of clove on my pallet. Not a nicotine bomb but ample for my taste. Takes fire well and has a consistent profile throughout the smoke. Not goopy or too moist. All in all a good change of pace smoke for me.

This is a pretty decent smoke. It looks as though their are about four companies making it? Anyhow, it smoked fairly dry, was somewhat sweet, and didnt disappoint. If you love aromatics, and want a little something extra, give this one a try, I think you will like it, and so will your neighbors!