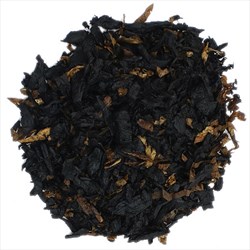 The unsweetened black cavendish offers some brown sugar. The grassy Virginia is hardly noticeable. The vanilla topping is the major topping, but suffers from lack of depth. The cinnamon can tingle the tongue. I sense another spice in the mix, but it’s subservient to the cinnamon and vanilla. The nic-hit is extremely mild. The strength is just shy of the mild to medium mark while the taste is closer to medium than it is to mild. Won’t bite, but needs to sipped a little as it does burn a little warm. Needs a light dry time. Burns clean at a slightly slow pace with a very consistent flavor. Leaves some moisture in the bowl, and requires some relights if you don’t dry it. Has a pleasant, short lived sweet and spicy after taste. Can be an all day smoke.

I think the cinnamon in this blend can make it run hot. Not to the degree the bowl can't be held. Hands free clenching for a mInute or two helps it to behave. This is a decent smoke, another step in progress from the Altadis days. Able to finish 1 ounce and do not regret buying. A bit ambivalent if I would reorder, but it is worth sampling, if at all curious or if the spice angle appeals to you.

It's more of a coarse cut mixture, than a straight ribbon, and it contains a lot more Black Cavendish than Virginia. The pouch smells stronger of herbs/spices than it does vanilla. Mine arrived way too wet.

If I'm honest I get far more cinnamon than vanilla from the smoke. It was the first flavour I picked out and is clear as a bell throughout. The vanilla can be noted, but I'd prefer more from it. The burn's good, giving a low temperature smoke.

I'm sure many folks will love this, but I can't do more than somewhat recommend it:

I'm pretty picky, kind of like that school teacher who doesn't believe in giving "A's," although I have given a few tobaccos 5 stars. This one is a really good, solid tobacco. Minimal bite. Lush smoke. Pleasant room notes. Taste is mellow, smooth, delicate. I docked its overall score because when comparing the best of the best tobaccos, you've got to be unforgettably perfect. I don't like having 4 scoring options--there's no middle. I would've given it 3/5 stars.

This is a pretty good vanilla blend. It burns a little hot for me. Maybe, it's the spices. Give me the vanilla and leave out the spices. I like a good vanilla flavored pipe tobacco. I've tried quite a few. My current favorite is Lane's BCA, which receives 4 stars from me. Lane's has good vanilla flavor, but burns cool as a cucumber. This one tends to burn hot. So, it gets a 2 from me.