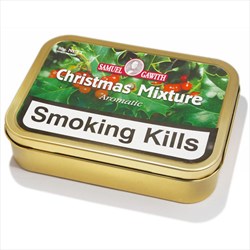 High quality bright Virginias are blended with a hint of black cavendish and burley tobaccos with flavourings added reminiscent of Christmas. Cinnamon, rum, sherry and cherry.

The blend's made of mostly light and dark Virginias but there's a tiny amount of black Cavendish. The alcohol governs the tin-note and this is one of the rare creations from Sam G which has a perfect amount of moisture.

Although the description on here states 2012 I think it's more of a generic Christmas blend as the tin's label just says Christmas Mixture.

The various Virginias form a middle weight, simple, Virginia flavour: hay, grass, etc. The tobaccos aren't what this blend's about, the toppings are the preeminent characters. The cherries are easily the most imperceptible of the bunch, the cinnamon and sherry are leading the pack here. I get some creaminess from a touch of vanilla, which lessens any harshness from the cinnamon and sherry. The burn, speed, and bite are all good: even, medium, and bite-free.

I got this from My Smoking Shop in Preston in December 2015 and opened it at the start of December 2016. The smell from the tin on opening is just amazing, a really powerful British Christmas pudding smell that is wonderful. It is ribbon cut and mainly light virginia, but beware it is very moist (in fact I would go so far as to say 'wet'), and in case there was any doubt the tin clearly states that this is an 'aromatic'. It does need drying, and I would suggest that if anyone was thinking of opening a tin for smoking on Christmas itself they do so now to allow that. It does burn quite hot once lit, but I don't get any tongue bit from it. That said the flavour is disappointing and as others have said the wonderful smell doesn't come through on the taste although I do detect cinnamon, cherry and I think a sweet vanilla/tonquin. In many ways it reminds me of a more subdued Peterson aromatic seasonal blend, so take note if you like those. But for me as a more traditional English blend lover I suspect I'll be sticking to things like Garwith Hoggarth's Rum Flake for future seasonal puffing!

My son's room mate was home in England over the Christmas break from school and I asked him to pick me up two 50 gm tins of this new SG offering. He said no problem as there was a huge tobacconist right around the corner from where he lived. Well...he forgot!! Needless to say I was disappointed but managed to find some in bulk from a US vendor. I ordered 2 ounces to start. It arrived at the perfect moisture level for smoking - unlike most SG tobaccos in tin form. It was a medium dark brown which looked to be a very rubbed out flake and coarse. There was very little black Cavendish to my eye. The bag aroma was of nutmeg and only on deep inhalation can you pick up the cinnamon. I didn't pick up the scent of either Virginia or Burley, however it was very delightful.

Loading and lighting was very easy. Interestingly, there was not really any detectable flavor of what I picked up in the bag aroma. It really was a very well blended Va/Burley mixture with the Virginia slightly ahead of the Burley. Occasionally there was the faintest taste of cinnamon, but very elusive. Now, this may seem to be a bland smoke, but surprisingly it was quite good. It exhibited it a spiciness reminiscent of Best Brown Flake. There was a very subtle sweetness throughout and I found myself reaching for at least two more bowls after an initial smoke - each and every time. There was no goop/gurgling at all and it never smoked hot no matter how fast I puffed, with only a mild tongue tingling if pushed. The room note was very pleasant while smoking and especially so after returning to where it was being smoked. No Lakeland presence whatsoever and it DGTs very well. There is a solid nicotine presence as well. If I had to describe it in a sentence I would have to say it is SG's version of what an American codger Burley should be; and although primarily a Virginia, it can be a satisfiable, all day smoke, any time of the day. Not much in the way of body, however, but satisfying in a comforting way. I was so delighted that I have ordered 16 ounces more of this in bulk so as not to run out too soon. By the way, my son's roomie said he would ask his mum to pick up a few tins and send it to me direct; he felt so bad about forgetting to pick it up himself. I really don't want to run out of this if I can help it! An easy 4 stars for me - kind of like the summer hit sleeper at the movies! I'm going to ask his mum to pick up some of SG's Black Forrest too!

It was ok, smelt very Christmassy in the tin, but really for me it's nothing to sing and dance about. All in all fairly disappointed as the tin note was very nice! I will keep it and try a few more bowls to see if anything changes. No tongue bite, but needs drying. Enjoy - Happy New Year pipers!

As we all know Samuel Gawith makes quality tobaccos and Christmas mixture is no exception. Lighly cased with cherry and cinnamon EXACTLY what you would hope for to reminisce about the old days of Christmas. Not goopy as otjer Aromatique tobaccos can be but it does require some dry time. It’s a shame this is no longer made as these Holiday Blends are so fun and a nice change of pace.

Helps to like Christmas pudding. I mean, it really helps. Overwhelming smell of brandy and spices made this essentially unsmokable for me. I like most aromatic blends, but can't recommend this one

I am a lover of aromatic tobaccos and although this is an aromatic, it lacks the flavour of many aromatic tobaccos. I bought this tobacco as it was advertised as having hints of sherry, cherry and cinnamon. Although I get a stronger note of sherry, there is also a less distinctive cherry note. There is however no taste of cinnamon in this mixture and the flavours that exist are mild. On a positive note, the tobacco burns and smokes well as a milder tobacco and is not totally unpleasant. This is recommended for those who like a mild flavoured aromatic, but not for those who like a full flavour to their smoke.

In a nutshell, this was very disappointing.

On one hand, I'm not much of an aromatic smoker, although I occasionally like something in that vein, particularly in the winter months around the holidays. I've had very good experiences with Gawith blends in the past, so I thought I'd give this a shot.

On the bright side: the tin note and room note are fantastic. Very Christmas-y: cinnamon, spice, and everything nice. I kept catching the lingering aroma on my clothes/hair for a while after smoking and it was fantastic. The cut is ribbon and isn't overly moist like SGs tend to be.

Beyond that, things go downhill very quickly. Upon lighting, you immediately get the full flavor of the tin note in the smoke - but after the first two or three puffs it all but disappears. No matter how slowly and coolly I kept the blend going, even to the verge of going out, I couldn't coax any flavor out of it. The flavor was virtually non-existent and had me looking forward to the end of the bowl almost immediately. After about 10 bowls in various pipes I never had anything but the exact same experience.

Tongue bite was also an issue for me. This, I'll chalk up to body chemistry, though. I didn't that the tobacco burned to hot and was able to maintain a cool, dry smoke, so I'm sure this was an actual "bite" more than a "burn."

This is a blend that is sure to please the crowd, but I can't imagine it will please many smokers. Give it a shot if you'd like, but I'd advise against it.