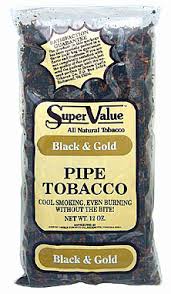 Super Value Black & Gold is a mixture of golden brown and deep black Cavendish tobaccos with a nice aroma that is mild-to-medium and deeply satisfying.

The black and golden cavendish offer some vanilla, toast and a touch of honey. Hardly much tobacco taste beyond that. The topping is a little vanilla and caramel. The flavor is fairly pleasant and comfortably smooth and creamy, but doesn't stand out much. Not much nicotine. Won't bite or get harsh. Needs a bit of dry time, and will still leave some moisture in your bowl. Burns a little slow and cool, but will require a few relights. Has a decent, short lived after taste. Sold under other names, but always tastes the same.

On a road trip I picked up some SV black and gold because it was the only thing available in the area. Pouch note was very sweet, smells really good with hints of maple maybe? I was pleasantly surprised with a decent tasting smoke. Room note is pleasant but not over the top. Downside, the SV did leave a slight goo cake in my bowl. Not my first choice, but I've had much worse. Recommended for a cheap over the counter pipe smoke.

Meehhhhh don't know.....I'm pretty sure "Gold" in this blend is 50% of the same companies "Vanilla Cavendish", and the "black", is the same companies "Black Cavendish". The description says no flavors added, but this is pretty doggone vanilla smelling and tasting. This is a LOT more sweet than I was expecting. Maybe PG. It's not bad, but I was expecting more of a natural sweet tobacco blend. When puffed too hard, the casing quickly burns off and basically you have ZERO flavor but tongue burn which is a great attribute. It starts off maybe a bit higher on the scale flavorwise than most OTC's you've probably tried, but ends up flatter later in the smoke. I'm still figuring this blend out, but so far, I'm not really impressed.

Found this to be a very nice smoke for a "cheap" tobacco according to others. No it does not rank up there with the stuff costing $5.00 or more per ounce. For everyday though it is a very nice blend that I thoroughly enjoyed. Have also use this to blend and loved the results. It has a bit of a sweet taste on the tongue and the room note is very pleasant. It is a little damp when opened and may need to dry before smoking. For an all day tobacco if you are outside it works fine as is. It lit easily and burned completely to the bottom of the pipe. I really don't have any major gripes about this tobacco. It is a nice everyday smoke when all you want is something you can light and then forget about. I bought the 12 oz. bag but you can also get it in the pouch to try a smaller amount.

Lately I've been trying to compile a list of budget blends, to see how much quality can be gotten for only a little money. Some Haven't been too bad at all, and similarly, I quite like this.

The blend has more golden/brown Cavendish compared to black. The smell from the pouch is very sweet, as though there's more than just the Cavendish' manufacturing process responsible for any added taste. The hydration's a touch too high, but nothing drastic, so it can be smoked from a new pouch without any airing time. It lights easily, and then gives a smoke that's a bit better than 'budget'. It's not up there with the like's of Cornell & Diehl, or G. L. Pease, but it's pretty good nevertheless. The main flavour's a vanilla one, it's louder than I'd have expected from the simple Cavendish curing process, it seems 'extra'. There's also a nice sweetness, this is conducive with standard Cavendish. I don't get much nicotine, I'd say it's very mild.

Although I enjoy the flavour of the smoke, the thing that I don't enjoy is the bite. This, again, is as I'd expect from a blend with added flavouring, not just from Cavendish.

Quite good value for money: