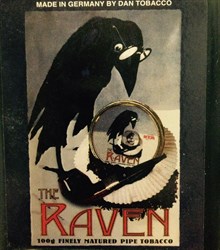 This sophisticated mixture in the English tradition combines the classic elements Virginia, Oriental and latakia in a very finely tuned relationship and therefore show off all nuances of taste from soft and sweet to spicy and tart to best advantage. The rather long ribbon cut promotes a regular slow burn with gentle smoke. A unique treat! [translated from German]

Sort of a lighter version of Timm London 1000, with less Latakia and a more dominant sweetish (coconut?) topping. Not bad, simply quite dull. Not a patch to a true English mixture, although there are several worse blends out there.

Enough complexity, juicy sweet and toasted Virginia background, but not enough distinctiveness and the Latakia does not shine very much. As I said above, the sweet tin note is reminiscent of coconut, a note which I have found in only two other tobaccos so far: Rattray's Highland Targe, and Ashton's Celebrated Sovereign (European version).

Age When Smoked: less than 6 months

The Virginas, Orientals and Latakia are "melted" and deliver a nice mellow, smoky-sweet smoke. This one is in total balance! Sweet, (in a pleasant way) a bit sour-ish along together with a decent smoky- woody-note from the Latakia.

I'd say there IS a flavouring to this one. Maybe a slight fruit (and sugar-water) casing? Because there is definetly a sweet-fruity note in it, that mellows the tobacco to a delightful all-day-smoke. Usually I only smoke Latakia in small portions - but this one is so smooth, I could smoke it all day, every day, because it has got such a decent, not intrusive Latakia taste to it.

All in all a sweet, smoky and fruity tasting blend, that is a masterpiece to me. Worth trying - you won't regret it.

3/4 Stars, as I really enjoyed smoking this tobacco! It is not the most special and complex blend - but it is what it is: A solid, unique and tasty blend, that deserves to be around! ;-)

This tobacco was inspired by "THE RAVEN" by A. E. Poe. The tin design is very beautiful and appealing.

The tobacco itself is a Virginia, Oriental, Latakia mixture with a lot of flavouring (honey, plum, apple, cumarin / tonka bean substitute and liquorish), and the main tobaccos are cased -- the virginias with the typical Dan Tobacco virginia casing, the others with their danish casing.

While smoking, I notice that there is flavourig added but I can't say, what flavour it is -- to be honest, I find it a bit annoying, and I don't think it adds something to the blend.

The smoke is somewhat boring for me. Used to the mostly excellent English Dunhills (esp. 965 and Standard Mixture), I can't get much satisfaction out of it. It's not a rebuy for me.

I wouln't even call this an English, but a Danish with a try of an English twist.

In comparison, I think th closest similar blend is (kind of) Mac Baren's The Solent mixture (almost the same price as The Raven), which is much more rounded and more concise (and with a much better roomnote, esp. for non smokers). But that is also not my favourite. If I had to, I'd prefer the Plumcake by Mac Baren, if I'd wish to smole a Danish-English twisted blend. But having all the wonderful Dunhills, I don't have to either -- I don't have a problem with paying good money for the good stuff.

Would I recommend it? Why not, it is worth a try and it has it's fanbase. And what can I tell about the likings of others?! It's just not for me.

Age When Smoked: one moth old

I had tried a bowlful of this blend at friends' about a year ago; not enough to form a definite opinion, but certainly enough to make me put this on my list of blends to test. Which I now did.

The tin contains a foil pouch folded into it; in my case, it was not even sealed, just folded shut. I understand that the export tins are sealed. The leaf from the new tin is ready to stuff; a mixed ribbon cut with lots of dark leaf in there, but also a good amount of bright VA and Orient. The tin note reveals a topping that is a bit weird, but acceptable.

Stuffing and lighting is easy enough; from the beginning, there is certainly enough Latakia in there, but also the wonderful sweetness from the VAs and the spice and flowery notes from the Orientals -- my guess would be Turkish. Good mouth-feel, easy burn, nothing but grey ashes left, practically no dottle.

This is the quality of pipe blend that I am accustomed to from Dunhill, and this comes at a much better price. I shall stick with it. The Raven is not a full-tilt after-dinner blend, but I do tend to smoke it in the evening; it has those qualities going with the idea of a relaxing evening. I tend to have a good ale or Export along with it.

I don't know who was the person who described the tobacco, but, I didn't see anything like this cut. The appearance was actually a fine, fairly long ribbon cut of tobacco the woody color of fresh larch, with flecks of darker latakia. The tobacco was fairly uniform in color. Here's what I didn't like: The tobacco has a lot of dust, even in normal humidity, which indicates its low quality. The blend dries out easily in the air, hinting that it will be quite hot to smoke.

Smell - rye mash, heavily acidic to the other smells, a bit of grass, stale leather, peat from Latakia.

Taste - peat, some molasses and malt. The initial taste is harsh, the tobacco bites at the slightest attempt to take a stronger puff. Later on, the harshness goes away, the malt disappears, and the taste turns into a sweet and peaty one. No "flavor nuances" to speak of - everything is simple and boring.

The tobacco smokes medium-hot and fast enough, even if you don't dry it out. A dried mixture threatens the pipe with burnout. Despite the stiffness and normal humidity when stuffed, a lot of moisture came out of the tobacco. I was literally pouring water out of the pipe. I tried smoking the blend using a filter, but it couldn't handle that much either. The strength is below average, nicotine hit the smoker is not a threat. Tobacco has a sweet aftertaste, which stays in the mouth long enough.

The ash is loose, fairly large, gray without shades.

The smoke smells like peat, but easily enough to disperse.

The bottom line: so-so tobacco. The quality of ingredients is low, the taste is stiff and unremarkable, burns quickly, a lot of water. Looks like my acquaintance with it will end quickly. And as the Raven said, "nevermore".

This is the blend I would recommend to a beginner in pipe smoking. It offers everything you can wish for as a novice. It is easy to smoke, does not tend to burn to quickly and provides an honest flavour of true tobacco without the disturbance of casing or fruity sweetness. I really do enjoy this tobacco especially in the evenings. Sure there are better "english" blends out there (Petersons Standard Mixture is similar but a little stronger and less sweet). The Latakia here is more subtle, but that leads to a pleasant room note, so my wife says. The tin deserves some attention, since it is beautifully made and designed. I really recommend this tobacco, but maybe that is only true for starters in pipe smoking like me (this is my 10th tobacco overall)

In my opinion a very good english blend for the money (quality/price). It is quite mild, one can smoke all day and it is definitely a quality tobacco.

A hint I can give is that if you mix it with a heavier virginia tobacco i.e. equal portions of raven and mellow mallard you get a delicious stronger mixture, making it a basis for experiments. The review refers to the bulk pack of 250gr.