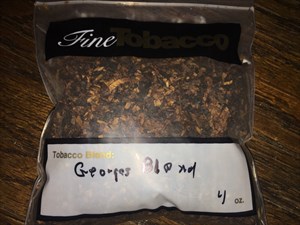 Notes: This is the flagship blend of this historic tobacco shop. Although no longer among us, George left his recipe for those who enjoy this blend so much.

Interesting to find this blend reviewed here. It is not my favorite but I like it well enough to give it 4 stars.

This was my favorite aromatic a while back, back when the aromatics I enjoyed were heavy aromatics. At this point my tastes have changed and I don't smoke aromatics very often, but I still enjoy lighter aromatics on occasion. Back then, I smoked pound after pound of this stuff and found it very satisfying.

The taste, to me, suggests lots of Cavendish in this blend. The aromatic flavor is a combination of vanilla, coffee, and possibly rum. It is a blend I would highly recommend to anyone who enjoys a traditional American aromatic and wants something of higher quality than, say, Captain Black, or the other traditional Lane offerings. George's Blend is probably the best smoke shop house blend there is. It is also unique and skillfully blended for what it is. George, the original owner, was a true connoisseur and a master of his craft. He blended some stuff for me a while back and he was always spot on.

The only thing that turns me away from this blend is the "secret recipe." Don't get me wrong, it is a very good blend, but I just don't like the whole "mystery weed" approach.

If you live in the area and like aromatics, definitely try it.

The house blend of the pitiful George’s Smoke Shop in Holland, Michigan. An overly sweet and cloying concoction that isn’t fit for a briar, thus I have relegated this nightmare to $2 MM cobs. I received a 4 ounce bag from my son during Christmas and that’s the only reason I’m smoking it. I cannot discern the casings used in this blend. All I can say is it’s sickeningly sweet and produces a large volume of smoke. It’s smokable, but just barely.

When I purchased and added this blend and the following review I had only been smoking a pipe less than a year and this blend got jarred and it sat in the back of many other jars in what became an overwhelming number of open containers. About a year ago as my open containers topped over 200, I resolved to not open any new containers until the number got under 25.

With about 116 open at present, I had finally unearthed this one and was ready to give it a more precise analysis. Earlier I had stated that this was like a vaper with a topping. After having smoked a few blends that are like that, I have decided that this is more a standard aromatic, but there is a spiciness to the smoke and I would not rule out Perique as an ingredient. Truth is there is no way of telling the exact ingredients as they are not published.

So, I would say this is mostly a black Cavendish with some light colored leaf which I assume to be Virginia, or perhaps a mix of va and burley. The aroma is fruity and spicy as noted earlier. The room note is pretty nice on this one. I had kept this one in the truck for a while and noted how nice the truck smelled upon return. It is easy smoking and not really bitey and also puts off a nice side stream.

If I had a complaint it would be that it lacks any real body behind the smoke, but this will matter little to most aromatic smokers. The topping is not my favorite, but it did not repulse me. In summary, it is a good smoke. It is not a great smoke. I have decide to drop this one to two stars for the simple reason of the integrity behind the stars and their meanings. If George's had a mail order operation and did not require walking into the shop to physically purchase the tobacco this would get 3 stars, but I don't want to disillusion anyone who is thinking of making a special trip for more than an hour to purchase this.

This tobacco and the store it comes from are not worth the trip. You would be better served visiting Indian River Tobacco Traders just off 131 near Grand Rapids. That is my two cents and I pretty sure I will not be repurchasing this one.

I am the one who added this blend to the sight. I was in Holland Michigan (great town.) I did what has become my standard thing to /do in a new town. Look for a tobacco shop. I happened upon George's Smoke Shop. I always get excited at the unknown upon enterring a tobak shop for the first time.

They had a good assortment of bulk blends with George's blend in a gigantic jar on the counter. The girl working there knew nothing about the tobaccoes except that George's blend was the most popular. whilst contemplating my purchase another patron walked in and purchased 4 oz. of GB. I quizzed him a bit and he told me it was all he ever smoked. I asked him if it was mostly cavendish and he said it had some in it. I asked him if it was an aromatic and he said it was as well.

He then said that George had died, but was gracious enough to leave the recipe. So I decided to buy 3 oz. What the heck, right? The smell was sort of vanilla, but not overpowering like a Captain Black White. When I lit it, my initial thoughts were that this was a VaPer with some flavoring added. I did not pick up the chocolate tones the patron had led me to expect (fortunately.)

I like it and I apologize for misleading anyone with the description. A primary intent upon adding this is to see if any of the other brethren have tried this and to guage their perceptions as to the contents of this local favorite. Please feel free to correct me. I will take no offense.

Consistently one of my favorite blends and from a great little tobacco shop in a great little town (Holland, MI). The recipe is still a secret, but when I open the bag it is most like an American (slightly aromatic) English blend. The main scent I get is chocolate, and the tobacco seems to be of great quality and has always burned well for me with lots of smoke. Great for a night smoke on a cold dark night near the lake in Holland.