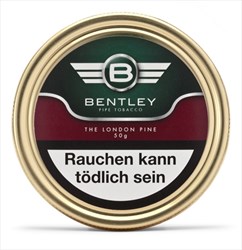 Bentley Old London is the first latakia mixture of Bentley. Traditionally made from selected Virginia grade, fine Oriental tobaccos, and a touch of spicy Kentucky. This mixture is enhanced with a generous amount of latakia.

Notes: The name was changed from Old London to The London Pine in 2015

Well, I will spoil the whole review for you. This is a very nice tobacco, and yet do not believe the tin description.

I have tried Bentley tobacco before, and it's a surprise that they promote a full english blend. With focus on Latakia. Their tin description even says "A generous addition of Latakia". And just off the tin tone, that is true. When you open the tin, you are welcomed by an aroma of Latakia, unmistakable, prominent and promising. It has a beautiful dark colour and the ribbon cut is perfected. So it is easy to pack, with just enough moisture to be called perfect. It lights easily and stays lit. From that point on, You can rarely get any Latakia. The aroma still promises latakia, and there is a faint taste of latakia in it. But nothing more. No nicotine kick, and no Lat-Bombs as latakia smokers call it. Just a nice, smooth and quite mild english blend, with just the least latakia to claim it is an english blend. It is nice if you like Early morning pipe, but it isn't something special. And definitely, Dan Tobaccos folk need to review the wording of "Generous" on the tin

This is a little different to most Latakia blends as the Latakia offers more of a subtle addition rather than a huge kick of smokiness!

As mine was ordered in a loose pouch I don't know how wet or dry it would be direct from the tin but this arrived perfect. By the look of the mix there has been quite a fair amount of all the different varieties of weed included. I find it hard to obtain much in the way of a pre-light aroma, it just has a really slight cedar/woody note.

Lighting up this blend is a simple task and now I'll mention my initial point: the Latakia is no where near as strong as I often find it can be in Lat' blends. Rather than giving me an almost putrid smokiness I get a very subtle woody taste from it; this works great with the nuttiness from the Kentucky and the Virginias fresh grass flavour. I wonder what they mean by a 'generous' amount of Latakia? Now, Sam G' Balkan flake is what I think of as being generous and this isn't in that league!

I can't say I get much nicotine from this. It's mild unless it's really pushed and then it only manages medium.

I find this alright but I couldn't award it any more than two stars, it's just a bit boring!

The tin aroma smells rather inviting, betraying components one would expect in a classic English blend, with a whiff of Latakia immediately present.

As with other Bentley tobaccos, the moisture was just enough, it lit up very easily and stayed lit throughout. The cut is also very easy to pack and work with. Needs just a kiss from the flame for relights, so it's a good tobacco to smoke during other activities, or when in conversation.

This blend produces a generous amount of smoke which lingers: the room note was rather strong and not very pleasant, reminiscent of something acrid at times, as was the last third of the bowl. Otherwise, the taste of the smoke was cool and very woody in quality: can't say it blew my mind, but did not disappoint either. There is a hint of Latakia there, but far from the "generous" label, as marketed. I can't say much more about the taste as it is "English" generic with nothing standing out much.

It reminds of Peterson's Wild Atlantic a bit: somewhat less pronounced with separate flavors and uneven, but earthier in general. The room note is much less protruding with the Peterson too.

All in all, a decent English blend to take with you outside to a meeting perhaps; one that does not bore you outright, but, at the same time, will hardly get to the forefront of your attention.

From a company like Bentley, a strong English is a bit of a surprise to me. I like good surprises, so I tried it.

The tin aroma is similar to that of Timm London Blend 1000 or DTM Holly's Discovery: strong Latakia-based blends, but in this case with some KY to add Oomph and a touch more Orientals. The tobacco in the tin is long ribbons, with shorter bits of Latakia in there; stuffing is easy, as is lighting.

In my usual Lat-Bomb pipes, this blend comes over fully savoury-sweet in taste; the room note is the usual Latakia disaster (I love it, all other English-blend smokers love it, rest of the world convenes a firing squad), so you have been warned. The Orientals make it a bit less offensive.

This blend burns down to a voluminous, mottled ash that has no condensation in it; there is enough strength to keep me interested, but unfortunately, at EUR 12.50, this is on the upper end of the price scale where I live. There are similar blends available that are much more affordable. But if you can get it for a fair price, by all means try it; this is an excellent English/Balkan blend!

This is a fine latakia blend. High quality tobacco with a nice amount of latakia and a noticeable incense note as a result. A little astringent when retrohaling, but not enough to put me off doing so. Really enjoyable and burns to a fine ash.