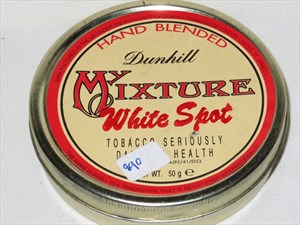 A fairly full bodied smoke that has 35% latakia, red Virginia and Turkish - a very English mixture. Available only at the Dunhill store.

You might think of this great classic blend as NIGHTCAP minus the Périque, or 965 minus the English-style Cavendish-processed leaf: at any rate, it is a perfect example of what was once called AROMATIC, before that word became synonymous, in the world of pipe tobacco, with "flavoured": naturally fragrant condimental tobaccoes that add a delightful aroma to the smoke, in the sense that the word aroma has in English: a distinct smell, a decided odor, a particular bouquet.

Syrian Latakia tobacco is fire-cured by exposing it to the smoke of certain aromatic barks and herbs: this not only gives to this tobacco its distictive "smoked" taste, but also makes it smell, when you burn it, a bit like the elements with which it was fumigated originally. This might account for the incense-like smell that it sometimes evokes, particularly when interacting with sweet-smelling "Turkish" tobaccos. (Frankincense is the cured bark of the olibanum tree, Boswellia carteri, whose gum resin, when burnt, usually at Church services, gives off a particularly wonderful, pungent aroma, NOT AT ALL like the obnoxious, cheap "incense-sticks" that the déclassé used to burn in my youth, whilst chugging jug-wine during "free-love" episodes. Those are more like the synthetic poisons used in drugstore tobacco.)

The elements that go into fumigating Syrian Latakia make it expensive and rare. Nowadays, most blenders use pseudo-Latakia made in Cyprus, a pleasant, lighter, smoky-tasting tobacco not really like the true original, named after a port-city of Syria.

WHITE SPOT actually has less Latakia than NIGHTCAP or 965. A delicious unique blend for the connoisseur.

Lets all be thankful that White Spot is sometimes still found.

I have smoked many traditional English blends during my 40 plus years in the briar brotherhood. Never have I smoked one that was any better than White Spot.

I know why Dunhill does not stock White Spot in our country's pipe shops. They know they'd be overwhelmedby the volume they'd need to produce. But, I thin they should as White Spot would certainly be an ambassador of good will. And if you like Latakia in large doses, this is the one. The above description indicates the blend is 35% latakia! That's quite a bit, and in fact the folks at the London Dunhill store (I purchased this tin mail order) indicate it holds the heaviest proportion of latakia of any of their commercially sold blends. Pipestud

Kendal Franceschi was kind enough to send me a tin of the Legendary Dunhill White Spot, a rather hard to obtain tobacco, unless one lives in the London Area. Living in Arizona, I thought the commute might be al little out of the way, so I was pleasantly surprised to have the opportunity to review it. The pipe I chose was another legend (at least in this owner's mind ), A 1988 Dunhill Cricketeer, a limited edition Hungarian, that has only had Latakia mixes smoked in it. Appearance: Coarse cut weed with ample latakia evident. This particular can has some age to it, most of the Va has darkened and the tobacco appears to be more homogenous in color than most English's. The tin fragrance is extremely appealing, with scent that shifts within the normal english framework to display an unusual amount of incense top note ( rem.of frankincense, somewhat) and a solid, leathery base. Test drive: Flame hits weed releasing a pleasant, med body smoke that is a bit more monochromatic than the tinned aroma would indicate. But what artistry in Monochrome! Clean, dry woody, still some incense dancing within the ether of the fragrance. For those of you who have tried Greg Pease's newest blend, it has much in common. Crisp, clean, a little less full, than Caravan, and slightly sweeter (I do mean slightly, this is dry). The blend actually softened and became a little sweeter mid bowl, and curiously, because we become less able to pick up olfactory nuances as we are exposed to them, the smoke actually seemed to gain some complexity near end stage of the charge. A most unusual tobacco! Summary: If available to you, I would highly recommend obtaining a can. The experience gained by exposure to such a blend makes it well worth the search. 9 out of 10 Bearclaws

A relative went to London so I had them pick up two tins each of white spot and deluxe navy rolls, two tobaccos I knew were unavailable in the U.S. It was purchased in a Dunhill store in London for about 10 pounds or $17 I think.

White Spot is a full bodied smoky tobacco. The latakia content overpowered me a bit. The tobacco is all nearly black in color and arrives on the moist side. The paper and the Dunhill card were stained yellow and brown. It packs and burns particularly well once dried a bit. The smoke is cool and heavy. This tastes like a stronger, aged version of nightcap. The finest quality of white spot is the technical smoking experience. This is a two match affair that burns dry, leaving the tiniest bit of ash. The smoke is very thick and cool. The flavor is not equally great. This was a strong, one dimensional tobacco. The flavor was dry and smoky without a trace of sweetness.

I liked white spot in the same setting as nightcap, nighttime, perhaps in cooler weather. I cannot imagine smoking this on a warm sunny day.

Few drink combinations worked with this tobacco outside of the usual black teas. I found coffee as well as most cocktails an unpleasant accompaniment. If you are going to take scotch, drink the cheapest, blandest malt, because you will not taste it anyway. The best pairing is lapsang souchong, it has the same smokiness, but adds sweet and woody flavors to make the smoking experience more interesting.

With this kind of strength, white spot is only an occasional smoke for me. Considering the lack of availability and the very high price ? I pay $6 or less for regular Dunhill tins ? it is a novelty item that you should try the next time you have access to Dunhill London. I doubt however, that many will be looking to pay such a price more than once.

I knew that I would like this blend before I ever left for London thanks to PipeStud's scathing review. I picked up a couple tins of this while on a short London vacation. This is a good medium English blend with top quality Virginias and Latakias. This is not a super great smoke, but a solid enjoyable blend. Not really an after dinner blend, but good in the afternoon.

Typically Dunhill in cut and "feel", a cross between London Mixture and Nightcap (without the Perique): it's a medium EM, but I feel it quite heavy (again, in a typical Dunhill way) as mouthfeel even if it's not strong. The taste of Latakia is not very prononunced in comparison to GLP mixtures, and the end result is a bit disappointing.

As with many, I had a friend going to England on a business trip and had asked her if she would mind picking me up several tins of this blend, (and several others for that matter).

Upon opening the tin I was greeted by a rather woodsy, slightly spicey scent. The tobacco itself is atypical Dunhill cut.

The blend packed easily and needed just one re-light after the false-light, (I do gently tamp the run of a bowl).

While the taste really did not vary the length of the bowl, I would have prefered personally that the latakia be lowered and the red virginia raised. I find that with the percentage of latakia as high as it is in this blend, the others get drowned out and/or back-seated.

I did find it clean, woodsy, slightly spicey and a very nice smoke overall. It burned to nice grey/white ash and without heel mositure.

The reason I some this only on ocasion is I can't find it here. A friend of mine kindly brough me some from London. I'm happy find that at least Eulenberg is aware of the fact that wood smoke is the heart and soul of latakia (anyone smoking Night Cap knows this) and that it is of Syrian origin. Myths sugest the keeping of late, unshipped crops hanging form the celling of poor, poorly ventilated peasents houses, where wood was burnt for heating and cocking. Though I perfer London Mixture (for its balanced charm), EMP and Night Cap (this makes me believe I'm smoking a forest) this is an absolutely delicious overwhelming latakia blend. Hope to get more soon.