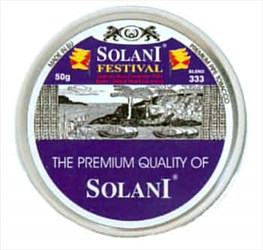 Virginias, black Cavendish, Burley and a touch of plum come together to form this delightful blend.

I gave this blend a try and the first bowl was not great, but once i lit it up in a bigger pipe and smoked it very cool it all started. there is a very slight plum with a lingering sweetness that fades in and out. i am giving it 3 stars, because it is a decent aromatic that has not been drowned in flavorings. this is how aromatics should be made. i enjoyed it and might even cellar a tin for a couple years. would recommend for people that liked Plumcake.

The Virginia is a little grassy with some citrus, though you hardly notice the latter. The burley is toasty, nutty, woody, earthy with a slight molasses hit and isn't far behind the Virginia in terms of what your taste buds will notice. The sugary black cavendish is silky smooth in a supporting role. They say there's "a touch of plum", but I say there's a little more than that present. It's a little fruity, and the plum is deep and rich. I also get a hint of red wine here and there. The toppings sublimate the tobaccos, but not enough to drown them out. The taste is creamy, very consistent and doesn't weaken, not even at the finish. Not a harsh note to be found either, and won't bite. Has a mild nic-hit. The strength is a couple of steps past the mild mark, while the taste level is in the center of mild to medium. Burns cool and clean at a moderate rate. It leaves just a little moisture in the bowl, but no dottle. Needs an average number of relights. Has a very pleasant after taste that lingers. Almost an all day smoke. Three and a half stars.

The initial sight of the mix is amazing, you have a good selection of the different tobaccos included right from the jet black Cavendish to the lighter Virginias and Burleys, all in quite big pieces. It doesn't give off much aroma unlit apart from a very basic Virginia one. The moisture level is superb, making for easy lighting up with a great even burn. The flavour of the smoke is very soft and not at all harsh, with a lovely hay note from the Virginia complemented by a superb sweetness from the black Cavendish. It is not saturated in falseness, you only get a hint of the plums, but the small amount acts beneficially to this blend as you don't get a great wallop of fruity falseness! I feel this would be a great evening smoke for those who favour less aggressive aromatics or for those who are trying aromatics for the first time.

I like this smoke. I like the sweet plum taste that stays throughout the bowl. The virginias balance and compliment the cavendish well. The stuff is a bit sticky but let it dry for about 30 minutes before smoking and it will do well. This is my evening smoke. It is a bit too sweet for me to smoke all day, but great after dinner or a single bowl in the evening.

Very pleasant blend from Solani; possibly a soul sister to their Sweet Mystery blend (which is another sleeper success of Solani). A classic mild continental aromatic, with Virginia and Black Cavendish the main melody and Burley rounding off the bass lines. Whatever :-) ... As usual with Solani blends, the tin aroma is promising but not overwhelming. The tobacco, while almost too moist on opening the tin, lit up OK with only one relight needed. Improves on leaving the tin for a few days after the first smoke. Mild leaf with plum, a little blackcurrant and possibly vanilla overtones - not overpowering but well-balanced. Burned well till the end. Among the Northern European blends it is a clear winner against MacBaren aromatics due to absence of bite, while it is as pricey as WO Larsen aromatics. In summary, almost an ideal mild continental aromatic with dry fruit overtones, which benefits from a short amount of air drying first. This one impressed my other half, who said "now this is a tobacco that I do not mind". Luckily, as I will have some more.

Age When Smoked: straight out of tin

Similar Blends: Connoisseur Choice by Peterson (but Solani is less fruity and does not bite halfway through).

I'm smoking this pipe tobacco for the first time as I write this review. I have to say it starts very sweet very the light flavor. While the bowl keeps burning you can feel the virginias and the cavendish doing the work but the plum flavor stays in the aftertaste and the room note… It is a pleasant smoke from start to end, cool burning, and recommended for medium to small bowl pipes, if you want to get the most flavor.

When I bought the full Solani line 5-6 years ago, I remember thinking that Festival is one I needed to buy again. Alas, I have not but the notes I took on this one back then were positive. Stronger in the nicotine department than many aromatics and the flavoring (listed as plum), was not the impression I received, more like a sweet brandy taste. The tobacco was actually fairly dry for an aromatic blend (probably due to the light casing), and burned very well.

I found Festival to be a fun change of pace smoke.

The plum definitely comes out in the smoke, along with some flavors similar to deep red wines. Cool smoke with no bite. Burns nicely throughout the bowl.

I received several ounces with some estate pipes, rehydrated it & set it alight. Wife LOVES the room note, which I don't get very often, so that's saying alot.

Sadly I understand this tobacco is no longer made.

Sugary and sticky but not wet, this could be topped with actual plum juice concentrate, and I would not be surprised. The smoke is sweet, not fruity, with the cavendish in balance with the other tobaccos, not leading them. This blend is a strange one which reminds me of frosting or icing. Not many aromatics can pull this off without being overly, if not sickly sweet, which this blend is neither. It is about as sweet as eating an actual plum.

A rock solid 4 stars, and the number one aromatic recommendation for an introduction to the genre.

The room note is phenominal. And does not smell like any other aromatic.

Love this stuff. Very fruity on the nose, and a bit sticky for some, but one of my favs. Room smells wonderful after. Burns nicely too

This is one of my all time favourites. I like all the Solani blends but this definitely is my favourite. The sweet black cavendish is like velvet in the mouth. The dressing is subtle but definitely present, fruity sweet with a lovely plum aftertaste. Five star tobacco in my opinion but each to their own, diversity is the spice o life. Saying that it leads to some disastrous mistakes but that’s another review, all I can say is suck it and see, I doubt you’ll be disappointed. ( unless you like barbecued leather tasting baccy)

I don't really know where to begin with this, yes it is decent and it will have a place with someone who likes it but to me it's just one of them smokes that's just a bit...meh.

Yes it is quality tobacco, and it isn't bad by any stretch of the imagination and I dare say a few years ago I probably would have enjoyed it very much, so why not now?

The reason being, is it is overwhelmingly sweet to me, don't get me wrong I love a good aromatic when the sweetness is applied with slight reservation, but this isn't in my book.

Yes I do detect the plum and berries, but the sweetness quickly gets sickly and by the end of the bowl it was overwhelming, to give you an idea it is on par and morewith American aromatic sweet.

I will stick up for it the quality is excellent it packs well and burns very even, like I said a few years ago I probably would of enjoyed this enough to stock up, just now I can see it being a great tobacco for people who like that sort of thing though, if the sweetness was held back a little I would probably enjoy this enough to make a purchase of it from time to time.

I will give this two stars as I would recommend it to those with a sweet tooth.

Just got this tin today must say im really positively surprised smells and tastes really nice all the way through the pipe. Reminds me alot of vauen Crunchy blend with the nutty but still Mirabelle taste not quite an all day smoke as it becomes quite sweet after some time.

Age When Smoked: Fresh from the store

Purchased From: The Danish pipe shop

This is a rather sweet tobacco, containing a high quality virginia and quite some black cavendish. The tin says that the mix has burley as well, but as far as my taste goes I cannot truly detect it. The virginia is sweet, with more of a hay-ish side to it than citrussy, and on top of that cavendish and the topping it comes out very sweet. The nose is very soapy, so from the get go my expectations dropped, but the taste is quite pleasant with a plum flavor - from lack of a better word. I guess the sweetness doesn't particularly sit well with a plum taste, or at least not what I am used to, as in the plum in this one is not your Royal Yacht or University Flake plum, but mor of a cake/tart plum ... like I said, lacking a better term let's call this a plum aromatic. The nic hid is mild to medium, ranging more toward the medium. It won't bite at all, which is quite a positive aspect as a filter less pipes does tend to give it a bit more openness. A solid 3/4 for me, and I guess I could smoke this on a regular basis on hot summer days.

I bought this tobacco from local tobacconist by chance normally in my country its really hard to find pipe tobacco and I can say that after smoking tons of cheap drugstore aromatics I found this tobacco really pleasant. When I first opened it, it was a bit moist and the first smoke was a bit under my expectations. However after drying it a bit and smoking it was amazing. Never got a toungbite it smokes cool you can get the aroma. It stayed lit for most of the time I never had trouble lighting and packing it. I would recommend it.

I bought this as part of a rare online order just to try something different and it turns out it is - an aromatic that I really enjoy. The flavour in the pipe matches that of the smell in the tin. It burns well but not too quickly, leaves a pleasant room note and there's not a hint of bite. I think I'll be trying more Solani.