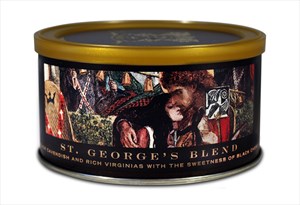 Black Cavendish and Rich Virginias with the sweetness of Black Cherry.

Notes: Today's pipe smoker is like a paladin of olde. Who better to fight for a noble cause? Enjoy all that is good by smoking this exceptional mixture of Black Cavendish, Rich Virginia and Sweet Black Cherry.

A mild black cherry blend, milder than I expected after smelling a freshly opened tin, which, if you are a cherry fan, will prove pleasing to your senses. Even though it's mildly moist fresh out of the tin, it burns at a reasonable pace, smooth, cool and clean with a very consistent flavor. The grassy Virginia mostly acts as a cooling base for the black cavendish, the latter adding a little vanilla note and plum hit. Requires few relights, and leaves little moisture in the bowl. Won't bite, and has no dull or weak spots. The nic-hit is mild. The after taste pleasantly lingers. An all day smoke.

This is a pleasant aromatic that does not overwhealm. The black cherry is nicely done, and while there is not a lot of tobacco flavor, it is mild and burns cool. There was a slight chemical aroma initially when lit, but that went away quickly. The flavor was good and the room note was pleasing. It became a little more mellow as the bowl progressed, but was a fairly consistent black cavendish w/ black cherry topping for me.

For my own taste buds, this is a a 2+. Judged strictly as an aromatic, it is a solid 3. If you are a fan of this genre, give it a try.

Don't make the mistake I made when opening a tin of Sutliff St. George's Blend. I filled my head with images and remembrances of the most familiar cherry blend in pipedom; namely, Cherry Blend by Middleton. Wrong; St. George's Blend is a whole different animal. Dark, pungent, and noticeably damp to the touch; this is the opposite of my remembrance of Cherry Blend by Middleton. Opening the pull top was a neutral experience with no off-gas pressure release. The color was in a very narrow range from dark brown to black and looked somewhat wet. Then there was the aroma. Not a hint of cherry, black or otherwise, anywhere. When I took a good snort from the tin, all I got was ethyl alcohol. This aroma subsided steadily in my sample smoke as it aired out and this also happened to the contents in the tin as it sat around. I have observed over the years that aromatic blends mature the least successfully of all pipe blends; losing their fragrances over the years. That is what happened here. So, what do we have? A very mild aromatic of, now, unknown fragrance that never bites and smokes super smoothly. I found it weak; too weak to be of much enjoyment and rather a nowhere smoke. I decided I had nothing to lose and began to insert it into micro blends where it was, surprisingly, positive. It's blending properties are far superior to it's smoking properties and I recommend it at three stars.

Age When Smoked: unknown, but about ten years old

Similar Blends: I've smoked black cavendish/Virginia blends before but none of them were like this docile blend.

There are a ton of cherry blends out there, and most of them inhabit the same low shelf reserved for B grade blends that your friend who only smoked once raves about. I wish I could say that this blend, named after the badass, dragon-slaying patron saint of England, was as memorable and virtuous as its namesake. Unfortunately, Sutliff St. George's Blend neither inspired king Henry to charge once more into the breach, nor me to hazard a second bowl.

Similar Blends: Every cherry blend ever..

I was really looking forward to sampling St George's Blend. Especially after all the positive reviews I have read about it. However, I can only give it two stars. I tried it first in a new cob and, I confess, I packed and lit it right out of the tin. Perhaps a mistake. I immediately got a heavy, mouth numbing, chemical taste. After a bit, I did finally taste some cherry flavor but it never overrode the chemical flavor. By the time I finished the bowel I had a strong feeling of "goop" in my mouth. Nothing tasted right for the next day. I have tried drying the tobacco and this has helped a little but I still get the chemical/P&G goop sensation-taste. It is a shame, I was really looking forward to a good cherry blend even though I am not normally an aro guy. I do give it two stars because there IS some cherry flavor and it has a pleasant room note. Also, this is MY reaction, you may have a different one altogether.

My wife and I have smoked most all the Sutliff Private Stock blends and I like this best of all the Aromatics ! The black Cherry Flavoring is just right . It burns cool and slow and you can taste the Black Cherry and something else . The room note is super pleasant . It wont bite .It's a lovely blend

This a great aromatic with medium black cherry flavoring and I can smell chocolate in the mix as the opened canister mellowed. While I like hand mixed stuff from my local Tobacconist this would be my go to commercial tobacco. I find it lights, stays lit, and tastes better than other commercial cherry's like Captain Black (and black cherry as opposed to cherry is itself hard to find). It's room note is fantastic and my wife absolutely loves it.

Purchased on a whim. Disclaimer - I'm a VaPer, English blend, and straight-up burley man. The only cherry infused tobacco I ever smoke is Middleton's Cherry Blend for nostalgia and the primo room note alone, but any tobacco named for a professional dragon slayer is worth a ride. Tin note decidedly cherry and not the cloying medicinal type that usually greets me. Something biochemically off-putting on the charring light gave pause. This disappeared on the second run about an hour later. Burn acceptable needing only a couple relights at a slow cadence. Minimal dottle. At this, I emptied the tin onto a plate for a three-day drying session and the chemical problem was solved. It was then a well-behaved aro with a noticable cherry/chocolate vibe, though happily not overstated. Vitamin N nothing to write home about yet not AWOL either. No bite on a puffing trial. It didn't float my boat but I wouldn't turn down a bowl either. For you aro fans and especially cherry blend lovers, this quality weed is certainly worth a spin.

On a bet, I tried a bowl of St. George's Blend. Why 'on a bet'? Because I believe that Cherry Blends have turned many potential pipe smokers away from the pipe because many Cherry Blends smoke hot, foul and goopy.

This is the only Cherry Blend I've smoked that tasted like Cherry and didn't bite at all. Most importantly, there's a little oomph in the virginia tobaccos that give it some depth of flavor.

Would I smoke this again? Absolutely. Not bad at all in a yard pipe.

I just finished a tin of St. George's blend and I like it. If even 25% of aromatics were even close to this, I would become an aromatic man. (Well, maybe I am already an aromatic man, especially coming in after working a day in the woods. That may explain my single status, too.)

The base is about 50-50 Cavendish and Virginia, so no tongue bite. Even more, it doesn't get hot. Some propylene glycol here, but I only had to leave this out one day in a sunny window. Compare that to three days to a week for most aromatics. It burns pretty well and leaves about 15% dottle.

I can't say too much about the scent because I just don't smell it on my own. But the flavor is just fine.

So in the Sutliffe line, this would be a good aromatic choice. I prefer the flavor of French Quarter and fell in love with Blue Danube, but both can bite a bit where St. George's does not. None of the three are cake masters, either.