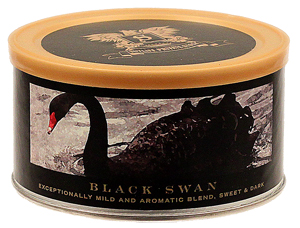 Notes: This appealing blend is unique in both appearance and flavor. Glossy all Black Cavendish is formulated to smoke mild and smooth from fire-curing and steam sweating.

...as per the Sutliff's Private Stock tin. Way back when I decided it would be wise to learn the basic components of pipe tobacco, I ordered this one from P&C as an example of cavendish. Good sealable tin, lovely sweet tin aroma, comes in what appears to be a cased rough cut, black as night.

I'm sure most of us have at one time or another tried a black cavendish and what do we most expect? That's right, VANILLA! Big vanilla. In many cases, overpowering vanilla, and often accompanied by prunes or dark fruits. This one is quite the opposite: it's main feature is mild sweetness with just a touch of vanilla, if any. The black cavendish is "fire-cured AND steam sweated". According to Classical Pipes (good reviewer) that's actually rather special and the mark of a well processed tobacco. He also points out that unlike many aromatics the effect actually improves during the smoke, rather than the opposite. He recommends a big bowl pipe, apparently to maximize the flavors.

My impressions rather confirm this. My position on aromaticity is that an aromatic should supplant and support the tobacco, but not dominate. It should also not burn, of course. This Black Swan is absolutely lovely in that regard. A pleasant, mild and toasty tobacco featuring sweetness over a background of light vanilla. If you want to know what cavendish is doing in your blend, this one will demonstrate its function - smoothness and mildness, with a nice creamy smoke. Extremely relaxing and easy.

Even though dried overnight, I needed to relight if I set the pipe down for even a minute or two, perhaps due to the casing. No biggie, and truth be told, there's really no need to dry it. Sutliff's Private Stock Black Swan is a keeper for me. I love its light aromaticity that still allows the well prepared black cavendish to show well. Nice in the tin, nice in the pipe. This would also work well as a good blender I think.

I'd buy it again.

This is a straightforward basic black cavendish with a mild vanilla topping. I am not tasting the fruit or prunes others have. It is somewhat dense and moist as delivered. The 1.5 oz only takes half the tin. I did not dry it but smoked it as is.

I found this to be very mild and a pleasant aromatic smoke that does not overwhelm with added flavor. There is not much tobacco flavor here either, but it smokes clean and dry and has a nice room note. The last 1/4 of the bowl had a touch of sour.

This is an enjoyable smoke although unlike my usual fare. It is a nice change of pace, and I would not hesitate to recommend it to a beginner due to friendly smoking qualities and a pleasant room note. It is not fancy or complex, but it is an uncomplicated good.

A one dimensional black cavendish blend, though it may need a light drying time. The vanilla topping is supported by a very light fruit prune note, and the sense of eating sweet baked goods. Has almost no nicotine, and won't bite or get harsh. Burns cool, clean at slightly less than a moderate pace with a consistent flavor. Leaves a little moisture in the bowl, and needs a few relights. The room note is so pleasing, your friends might start looking for where you hid the cake. An all day working man's black cavendish blend that doesn't have any chemical taste.

I have been on an aromatic kick lately since it has been rather cold in Las Vegas this Winter and therefore I needed some sweet smokes so as not to stink up the house. I had wanted to try Black Swan since it's description of a plain Jane Vanilla Black Cavendish is right up my alley, some of these blends can get cloying by having a topping that's over the top but when I popped the tin and took a whiff I knew it was ok. Steam Sweated Burley I presume that's been toasted and has a very mild topping, just enough to sweeten the mix and provide a wonderful room note. Most resembles BCA or Captain Black Dark but without the hint of Fruit that those provide, again a very unique Black Cav that deserves a try, makes a wonderful mixer too! Try this mixed half and half with Prince Albert or Granger etc. it makes for a wonderful Burley and Black blend,

Black Swan is a mild smoking aromatic from the Sutliff Tobacco Company. In the tin it’s look was extremely appealing to me. Jet black in color and the smell that reminds me of chocolate covered raisins. To each their own, but I don’t detect the all vanilla in this one as others have commented. It’s very moist freshly opened and requires that you either leave the tin off for a day or two or plan ahead and give a bowl pack sufficient time to dry. If properly dry this is an aromatic that surprisingly is not goopy.

The charring light produced great billows of smoke and as I inhaled I was shocked at how smooth and mild the smoke was. Now, to me it lacked the flavor I expected from such a rich looking tobacco. The entire smoke I’m left wanting something. I am unable to even describe an aroma for this one. There is something there, but just not enough for me. A guest I had over and sat in the room commented the room note as pleasant, but couldn’t nail down a specific aroma either. I’m sorry to say this one just didn’t do it for me. It’s smooth, smokes remarkably dry, it just didn’t have enough flavor.

I can only somewhat recommend this to a piper looking for a very light, but also a smooth smoke.

As with the previous reviewer, I found this blend burned better after a bit of aging and drying. The room note is quite lovely. The taste is mild and relatively pleasant. I am not usually drawn to aromatics; I often find that my spouse is far more fond of the room note than I am the flavor, and this tobacco fits that description. I found that it is easy to smoke this blend hot. I also found that if I smoke a lot of this in one sitting, I am left with a relatively unpleasant aftertaste - I have found this is true with many aro's, and may only be evidence of my unconditioned palate for aromatics blends. Not an altogether negative smoke; however, as my pipe smoking experience expands, I find myself drifting further away from both this blend and other aromatics.

Purchased this on a whim. Like the tin, not that it matters much... Upon opening the tin, I noted a heady sweet smell mixed with what a candy making factory might smell like. I kept getting a hint of cola. Black silky tobacco inside. It seemed heavy and oily/moist, so I left it open overnight. Not much difference in the morning...

I gave it a shot on my way to work, about 30 minute commute. I thought it lit easier than expected, caught notes of prune, toasted sugar, cola, maybe a hint of cinnamon, and a cookie bakery, silky in nature. Flavor was mild and hard to identify. caught some sweet burning tobacco flavor as it went on, but not much sweet taste. Had to light it a few times. Have yet to finish the bowl.

I would say that it is interesting and smoke-able, but one of the first thoughts that came to mind went to using this as an addition to a baccy I didn't think was too great, to even it / mellow it out.

This tobacco came to me by mail and was a free sample I sent for months earlier. When I opened the can I was struck by the smell of prunes or maybe figs. It was pleasant enough but I wasn't sold on its smoke-ability yet. The cut was short, the color black, and the consistency of the tobacco was silky. It felt and looked too moist to smoke trouble free, so I left the can open for about four hours before I gave it a try. Once loaded and lit the tobacco smoked cool and continued to have a fruity room note. I had to re-light often but I found it tolerable enough to smoke to the bottom. I'll smoke this again, but it will not go into normal rotation.