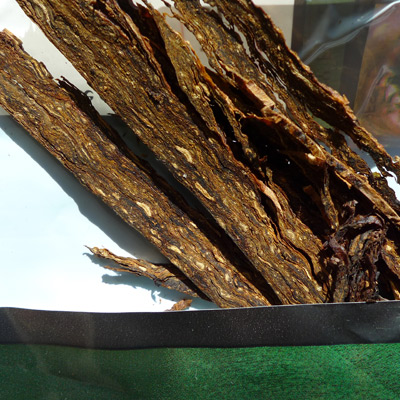 Four Squires Flake is a combination of flue-cured Virginias from Brazil and Zimbabwe, augmented with a smaller amount of sun-cured to add sweetness and body.

Not as full as CR Virginia Flake or Westmorland Slices, but still quite rich and dark in character. As you light up your pipe, it progresses from medium to full and then fuller. The topping is not overtly present, but it flares up now and again. The tin note has a quite strong and distinct licorice note to it, which is something that shows in the room-note as well. The moist content is rather high, but these flakes are easy to pack in your pipe and get going with just a few relights. The smoking experience is rich and flavoursome. The topping tends to wane the more you progress with your smoke, but the tobacco evolves quite nicely every step of the way. I am not entirely sure I'd call it a "Lakeland," but it has the GH hallmark all over. It has acidic properties with notes of lemongrass and hay, the latter being more pushed into the background. If you are into darker flue-cured Virginia type tobaccos, this is a must. The smoking properties and quality of this tobacco warrants 4 stars.

Here we have quite a robust, medium brown flake that's of a good moistness. What I find a bit odd is if I didn't know better I would be sure this has been cased with something. The nose from my pouch suggests that it contains coffee, liquorice and aniseed ; perplexing! As the flakes are a touch robust they demand thoroughness when rubbing, unless you favour the fold and stuff method! Although it's supposedly a straight Virginia I can still detect aniseed in the smoke. Are they sure it's not cased?!! I do find this diminishes somewhat as the bowl gets past half way though to the point where it totally disappears. I find the vitamin N to be at a medium amount, that's something I'm indifferent to as I don't really inhale my smoke. I get no bite from it and it's of a pleasing temperature too.

If the flavour towards the end of the bowl was there for the duration it would not be an equivocal blend to mark, four stars, but due to the unpleasantness for the first half I feel to give it two stars is magnanimous indeed!

Once upon a time, a long, long time ago in a land far away, there were three squires. These three squires loved their food, but could never agree on which flavour was best. One liked the liquorice flavour of fennel, another liked the spiciness of Madras curry powder while the third was a bit of a fan of the quirky Theakston's Old Peculier. So they got together and combined all three. However, unbeknownst to them, a fourth squire, who was a bit of a tosspiece whom no one liked, got wind of this and sneaked into the King's castle where they were residing and plastered the new flavour with Bovril. History does not leave to posterity what happened to the flavour or the squires, it is known, however. that the king of said castle managed to sneak in a little known addendum to the Magna Carta soon after, stating that, regardless of all other flavours, everything must carry some waft of G&H's Glengarry Flake.

Yes, I know that's an extremely self-indulgent start to a review, for which I profusely and, once again, self-indulgently apologize for. Never the less, it's the only explanation I have for this little known flake. Having bought 25g of this one, just as something a little out of left field that's a bit of an unknown, I had little idea of what to expect. I certainly chose not to get my hopes up. Upon opening the packet, I was greeted by flakes that are long and thin with a mixture of gold and deep browns with strange wafts of fennel and madras curry powder, this flavour also appeared in the first couple of smokes along with a waft of Theakston's Old Peculier, one of the nicest beers going, these quickly faded into a dull, fairly tasteless smoke. Subsequent sniffs of the packet, however, have morphed into the smell of Bovril, giving a mild meaty smell while the smoke has developed into tasting of an extremely mild version of Glengarry Flake with a certain oakiness to it, with the other flavours disappearing pretty quickly. There does seem to be traces of something sweet on floral underneath but it is very difficult to pick up, let alone determine. I have done a little reading round the two websites that I've found that actually sell this stuff and it's supposed to taste of maple, not that I could tell.

All in all, a strange one. Those weird smells and tastes do make me wonder if this sampling has got tainted at some point as they seem so darned unusual in a tobacco, especially a lakeland one. It is also very mildly flavoured, it took four smokes, a good ghosting of my briar, to get a good flavour up, also drinking while smoking this one doesn't help either as it clears the palate a little too often. I found my self giving it time to allow the flavour to build up on my tongue. I do wonder if I have a keen sense of taste because in most of my reviews I seem to pick up a lot of flavours in a tobaccos that others don't. Of course, I could be deluding myself and be picking up stuff that isn't there. However, my advice re: this tobacco stands as thus. if you like mild tobaccos, it's worth a go and you might just enjoy it, if you like something a bit stronger, don't hesitate to completely ignore both my review and this tobacco, as I doubt it will serve you well. For me though, I enjoy the mild Glengarry flavour and anticipate some more in future, see if those bizarre notes continue.

I had high hopes for this blend, having tried Ennerdale previously (and the fact it was gloriously dusted with sugar when I pulled it out of the jar). The flake had a dark, dried fruit smell like figs and fruit cake and it packed and lit well, requiring minimal relights. There was a slight Lakeland flavouring in the background, which instead of the usual bright florals was only just there, sadly making it just taste like incense (both the Ennerdale and Four Squires had been in the same package when posted, so I'm not sure if the Lakeland should have been there, or was just cross-contamination). Other than that the taste was sadly minimal and a bit bland, with no where near the depths of other GH blends.

Not the worse smoke ever, just a bit boring. I'll probably finish up the rest rather than dump it, but not one I'm going to purchase again.

What an audaciously delicious odour that drives the nostrils into the pouch.

And that flavour remains in the smoke. And that, in itself is unusual.

It's golden syrup, ginger. It's grandmas house on a good day. I absolutely love it.

I wish the tobacco could be a little darker, a little less sharp ginny. A bit more oomph.