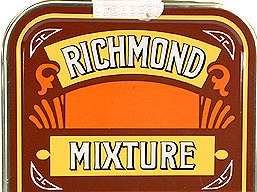 The balanced blend is composed of fine Virginia tobaccos and a premier sources carefully processed black cavendish. A powerful and well-balanced mix.

This review is based on a sample of the 1930s version, which I had the good fortune to try. I post it for historical reasons. Thought the Orlik version does not mention burley, it is certainly in this ancient manufacture.

The burley is a little nutty and toasty, earthy and woody. The Virginia is earthy, lightly sweet with earth and grass notes, with a mild tangy citrus and a touch of dark fruit. The sugary, unsweetened black cavendish has only a slight effect on the smoke, and I suspect it has lost more from aging than the other components have. The Virginia has the characteristics of full maturity in strength and taste, more so than the burley does, and often takes the lead, though I usually notice the burley more early in the proceeding. Fairly smooth and mild to medium in strength and taste with a moderate nic-hit. It’s a shag cut that burns a little slower than your average shag, hardly requiring any relights. There are a few cigarette/cigar notes after the half way point, though they are less obvious if you puff slowly, which produced better results for me when I did. Leaves nothing but ash at the finish. Barely leaves any dmapness in the bowl. Could pass for an all day smoke.

The return of a blend I have not been able to get in a long time. The tin note is of hay and citrus, with some fruit and sweetness—a topping is applied, but tastefully and sparingly. The leaf is a long ribbon, mostly bright yellow VA, some light reddish hues, and between 5—10 % Black Cavendish. The Burley mentioned for an earlier incarnation of this blend I cannot make out.

Stuffing is standard, don't overstuff, and puff gently (lots of VA…). The flavour is sweet, slightly tart, tempered by the BC, which adds a good amount of depth. Little variation during the smoke, but the flavour and room note are good enough for me not to complain. After a single match, I have practically no dottle left, a nice aftertaste on the tongue, and 3 stars it is. While this blend is not in my current go-to spectrum, I may well come back to it in the future!

Note: This blend was not available in Germany since the mid-1990s (at least, I have not seen it in stores since then). My personal notes from the early 1990s are of a blend with far more BC in it and potentially some Burley.

A surprise tobacco for me. Gift of my friend nektarios while I was in Lithuania.

It must be a tobacco with history, judging by the dozens of old tins circulating on the internet by collectors.

It is very easily smoked, something that helps it become an all-day smoke. This doesn't mean that it is a mild smoke. Probably heavy I would say.

Virginia and Black Cavendish are its ingredients. But personally I think it also contains a small portion of Burley, adding body to the tobacco. I suspect it from a bitterness that is left at the end. The aftertaste has nothing worth mentioning

The room note is neutral.