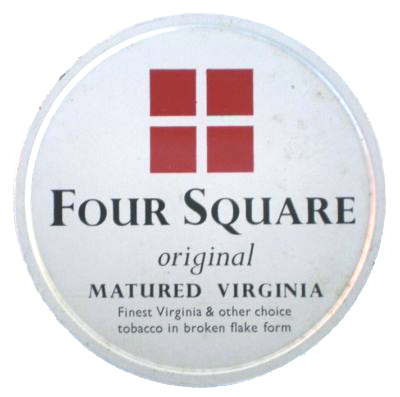 The floral, woody, earthy, dry and sour, fairly spicy Orientals are the lead component. The earthy, mildly grassy, citrus and dark fruity Virginias play a strong supporting role. Even though Cyprian latakia isn’t listed as an ingredient, I notice a smoky, woody quality in the background that I normally associate with that varietal, so I’m claiming a pinch or two is present. The strength is a step or two short of medium. The taste level is just short of medium. The nic-hit is almost in the center of mild to medium. Won’t bite and has no harsh spots. Burns slightly warm and very clean with a consistent spicy, savory and mildly sweet flavor all the way to the end. Easily burns to ash. Leaves little dampness in the bowl, and requires an average number of relights. Has a pleasant, lightly lingering after taste. Can be an all day smoke.

My first venture in unaltered tobaccos. i loved the sweetness of the Vas and slight spiciness of the Orientals.

It is a pity that Dobie's Four Square blends are discontinued!

Apparently they have been replaced by Caledonian, also now discontinued, but Caledonian was not similar to Four Square.

I believe this is the blue tin.

A rather light blend, on the spicey side, containing a small portion of Latakia.

Even as I was starting the English blends, i found it a bit too mild after half a tin or so.

An ideal english blend to start off with but, as I said previously, I think Four Square has been discontinuated and replaced by the Caledonian line.

But it could only be an urban legend.

I think the previous reviewer may want to double check which Dobie blend he was smoking because far from being a shag cut, this old classic is a broken flake, similar to some of the Rattray's Virginia offerings.

This blend is very hard to find, and my tin must have been at least 10-15 years old. The aging certainly mellowed the leaf to the point where it was as smooth as silk with no "edge" whatsoever. The addition of some Oriental leaf to the deeply rich Virginia makes the smoking experience extra special as each delicious puff brings a delicate tobacco spice to the taste.

If you smoke multiple bowls a day, I think this Dobie offering might be good to get you through the afternoons and early evening hours before finishing up with a good face slapper.

This one is slightly reminiscent of Presbyterian Mixture and Davidoff?s English Mixture. It has the same piquant and slightly astringent flavour, very pungent and rich. DOM however is milder and drier than the other two. Not entirely a cool smoke, it tends to burn rather quickly, but it is savoury and fragrant. The tobacco in the tin comes in broken flake form, with some lose ribbon. It is virtually bright in colour, with some darker brown leaf thrown in. Perhaps I am wrong, but I assume there is some Latakia used in this one, very sparingly, and of a smoother variety than most other English mixtures I have tried. In fact, the room aroma is not at all heady and those normally offended by such leaf do not seem to mind DOM?s scent.

The dominating flavour in DOM is of a Turkish nature. It has have a very sweet/sour structure throughout the bowl, not at all unpleasant but it does tend to tickle. Mild in strength, the first half of the bowl betrays the overall richness of the mixture, which becomes apparent in the second half. By the end of the bowl, I felt there was a certain degree of steam and gurgle, but in general it smokes clean, leaving a dull grey ash. Considering DOM is now being produced and blended in Denmark, it is not a bad English at all. A good change of pace for those already familiar with English blends, but would not recommend it as an introduction to this type of tobaccos.

Update August, 13th 2005. I have checked my tin (I keep them when finished). It is really this blend, Four Square Original Mixture. Light grey, almost silver tin, 4 blue squares.On the back: made in the Kingdom of Denmark under authority of Dobie's. I've bought that in Germany, year 2004, at estatepipes.de. As I have said other times, tobaccos here in Europe sometimes are VERY different from the USA versions.

I liked this very classy, refined tobacco. I don't think it's something you can smoke continously because it can be easily become boring, unless you really crave the astringent taste of the orientals. The shag cut makes packing and burning an easy task, but pay attention not to rush it because it can easy become hot and bitter. A good smoke.

Today is June 7th, 2006, and I just popped a tin of this dated 11.10.98. It has aged well, nice and oily, I had to peel a few of the discs off of the paper label. Room note is pleasing to the girlfriend, this one smells like an aromatic in the tin but not really when it's fired up. I don't think they make this anymore so I will be savoring this one last tin.