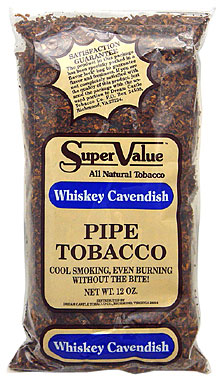 This blend has little tobacco taste: just a little grass from the Virginia cavendish, light sugar and toast from the black cavendish, and slight wood, earth and nuts from the burley. The whiskey is the star, but it lacks a little depth. Doesn't bite or get harsh. The strength is a step past the mild mark. The taste level is a notch short of the center of mild to medium. Has very little nicotine. Needs a bit of dry time, and burns cool, wet and a little slow with a very consistent flavor. The after taste and room notes are very pleasant, but short lived. Leaves too much moisture in the bowl, and requires a fair amount of relights if not dried. An all day smoke.

There's only a tiny amount of black Cavendish, it's nearly all brown Cavendish and Burley. The cut's coarse and the moisture's good. I'm not a fan of the pouch-note, it's incisive and cutting.

This is one of those blends where the topping ruins it. Forgetting the whiskey for one minute, the tobaccos taste alright. I can't identify any black Cavendish, it's a smoke composed of Cavendish and Burley: honey-sweet and slightly nutty. Back onto the topping, horrible. The blend hasn't been loaded to the gunnels with whiskey, but there's enough of the bitter, harsh, toxic, taste of the actual alcohol-not whiskey flavour-to ruin it. The description says it smokes cool with no bite? Rubbish. It burns hotter than the pits of hades and bites horrendously.

Whiskey Cavendish? Just because something's cheap it doesn't mean it's a bargain. I'd give it zero stars but a box HAS to be ticked! one star:

Yes this a cheaper tobacco. Yes it has some PG in it. However for the price I love it. I bought a sample and tried it in a cob and briar. In the briar it was not bad but didn't set the world on fire. In a cob if you puff it like you sip whiskey it is really good. The nuttiness of the burley mixes with the whiskey in a beautiful way. I will use this only in my cobs as a daily smoke. I bought the 12oz. bag and as soon as I have room I will add another. No this doesn't smoke like it is $4 per ounce but if you treat it gently and don't smoke it hard and fast it will reward you with 45 minutes of absolute delight. There is not a harsh or strong aftertaste just a pleasant nutty sweetness on the tongue that lets you know Mr. Burley was there.

A little bit on the goopy side. but if dried is a pleasant chance of pace, not to strong a whiskey flavor. Decent for the price. Update.. still leaves a nasty goop at the bottom of your bowl. even after dried.

Decent, cheap tobacco. Taste- and smell-wise it was very mild. The whiskey was not overdone, but had a kind of slightly soapy, floral sort of flavor, which was fine by me. Room note was pleasant enough. The burn never really got too hot and bite was minimal to none... and I know there were times I was chugging away at this stuff. I seem to remember this tobacco leaving a bit of dottle although this may have been my fault as much as the tobacco's. As far as I could tell, this tobacco did not foul my pipe or goop up the bowl, and it didn't seem to ghost much either. Pretty mild stuff. No complexity obviously and not really a whole lot of flavor this way or that either... just mild and inoffensive, cavendish tobacco taste with some whiskey. I'm going to recommend (at 2 stars) this tobacco , based on it's value and relative lack of negative qualities -- with the caveat that if you are a fine tobacco connoisseur, you will not be impressed. But, if you are looking for a cheap, mild daily driver , this would definitely be worth a try IMHO.

ehhhhhh I don't know about this one. I don't get any Whiskey flavor at all. I kinda did in the bag, although I got more banana and cocoa hints. Smelled dang good in the bag. I do get a sharp twang on the exhale, maybe a kick of spice. I don't know. I could see this being my least favorite tobacco to date. That sharp spike of taste doesn't work right for me. Edging towards cigar or cigarette flavor. I'll keep working on it. In all honesty, it's been 30 years since I had a whiskey blend. And I didn't like it then. I'll give it a few more attempts and update. Note was not heavily approved by the approver.

This is some nice tobacco for around $14 for 12 oz. It burns well, has delicious taste and smell. People often say "Your smoke smells delicious, not like that disgusting cigarette smoker standing right next to us." I recommend you stuff some of this into your pipe hole.