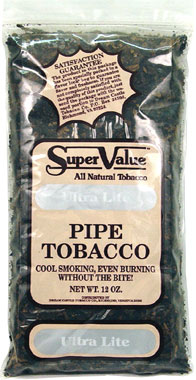 Super Value Ultra Mild is an easy-smoking Burley and Cavendish blend with a mildly sweet top-dressing that yields an exceptionally pleasant room note.

I often like to see what quality so called budget blends can give. A few of my 'value for money' endeavours transpired to be not bad, but my last attempt at researching into value went down like the Nagasaki bomb: Super Value Whiskey Cavendish. Disgusting. But Ultra isn't as bad, although it wouldn't be a desert island smoke it aint the worst I've had!

It's presented as a medium brown ribbon that's a little on the coarse side. The pouch-note's one of sweet additions and the moisture's good.

On the low side it can be quite tricky to get lit, even though it's not soaking. But once the burn's been established the smoke has quite a nice flavour. The tobacco flavour's driven by the Burley, with a finishing touch of sweet hay coming from the Virginia Cavendish. The topping doesn't seem like just vanilla, there's an extra flavour reminiscent of candy floss or marshmallow. The burn can creep a bit too high in temperature, it needs quite a bit of maintenance from the flame and tamper, and can also be a biter.

Although the flavour isn't offensive I'll rate it with just two stars: it's like one of many sweet aromatics, the quality of burn reduces the score, and the tongue bite can be quite perturbing. Somewhat recommended:

Got this 1.5oz pouch as a complimentary extra with an order of tobacco from pipesandcigars.com. Pouch smells like vanilla granola with raisins and dried figs. Hardly a trace of the expected “cheap aromatic” chemical note. Really pretty pleasant. Cased to the point of hiding any hint of the tobaccos used. But the vanilla aroma is pleasant enough.

Once lit this stuff really is light. Vanilla is not overpowering, Tobaccos come through in quiet tones of Burley and Virginia (maybe?). Sweet, dessert-like, baked cookies, sweet grass, even slight cinnamon notes. Sweetness increases as the bowl burns down. Near the bottom of the bowl, develops a sort of stale ashtray taste which makes it hard to smoke it all the way to the heel.

Better than your run-of-the-mill drugstore blend. But generally, too mild, too weak, too boring. It's obvious this is lower grade leaf like most bargain aromatics, but the casings are pleasant and don't taste quite as chemical-like as most bargain blends.

I normally do not do back to back reviews but seeing how I will probably not be getting around to this one in the foreseeable future I decided to go ahead and do this while it is fresh on my mind. Back in 1999 I had not been too long out of the service and man it was tough getting a job. I wound up working at a cigarette and cigar store, not like the ones we have out here today with the glass pipes, etc. but a pretty nice store. It was a chain that is no longer around. Next door was a drug store and I went over one day to get some gum or a soda and they had a basket of pipe tobacco for sale for 10 cents each. I bought about 4 twelve-ounce bags with one of them being this blend and the other was whiskey and over a dozen of Sir Walter Raleigh, Carter Hall, Velvet, 1.5-ounce pouches in the boxes. In other words, I bought them all. A few years ago, I finally opened this bag smoked a little, put in back and forgot about it. I was looking for something and came across it and decided to mark it down as another blend I have tried in my quest. My bag says Ultra Lite, the photo on this site shows Ultra Lite but the description names it Ultra Mild. I should be a proof reader but I am stalling. After 20 years this stuff was still relatively moist and had a faint tin note of vanilla and was a nice medium brown ribbon cut. Thank god for Propylene Glycol! I loaded some up in my cob with filter this time and smoked about three to four bowls of this during the day. It was okay, tended to get a little hot a times but not bad. This stuff is still available after twenty years so pipe smokers do buy this stuff. Me personally I would rather spend a little more, maybe get a little less but in so doing have a better-quality blend. The sad note is I bet this twenty-year-old bag probably tastes about the same as if I bought it fresh. But hey, you can’t beat a dime!

If you like Lane BLWB try this. The flavor is not exactly the same but it is very good. This makes a great stand alone smoke or as a blender to tone down something that is too hot or strong. It is mainly burley and smokes as such. If you think cause it comes in a bag it isn't any good be ready to change your mind. This is not goopy and does not have to air dry for days to smoke. I keep this one on hand as it gives a longer burn than the Lane BLWB does. The flavor and aroma are every bit as good. I've tried several Super Value blends and have liked all but one. If you need to watch dollars then consider this tobacco. I like it and keep it on hand to smoke especially in the summer when something cool and mellow is appreciated.