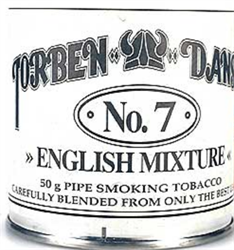 A long cut English mixture. In spite of a share of 40% latakia she unfolds a subtle sweet, spicy character and a surprisingly mild flavor. The No.7 develop at best in medium sized pipe bowls, waiting for their slow burn-through with a pleasant, cool smoke. An all day smoke for those who enjoy a fuller English mixture.

I was just recently gifted an older tin (at least 10-15 years of age), of Torben Danske #7. I read in the descriptive above where this blend is comprised of 40% Latakia. As expected, the Latakia leaf breakdown was substantial after so much aging and it was not strong at all, allowing the sweet, aged, and mellow Virginia element to really shine. The Virginia leaf employed when tinned must have been spectacular in quality and I want more of it! I would certainly have enjoyed this more without the wafting of the remnant Latakia flavor, but I still enjoyed it greatly.

If you have an opportunity to try an old tin of Torben Danske #7, don't let that opportunity pass you by.

Upon opening this tobacco, the scent is absolutely lovely, an archetypal English blend with strong Latakia vying with sweet Virginias for primacy. It looks the part, too - the cut a nicely balanced mixture of dark and light browns, mixed in with Black flecks. The cut is slightly thicker than a standard ribbon cut, and there were also a couple of pieces in there that seemed to have missed the cutting machine entirely, but they were quite small and easily torn up. Upon lighting the tobacco, the taste is fine, but completely underwhelming. I should point out at this stage that I first smoked this tobacco after about 2 weeks of smoking just Nightcap and Kendall Dark Plug, so I thought that that may have accounted somewhat for it feeling so underwhelming. Having smoked it for 2 weeks now, though, with nothing else in between, I'm still left feeling quite flat by this blend. It's not bad as such, just entirely nondescript and very pedestrian. There's no real emergence of other character throughout the bowl. The first puff is the same as the last. It's fairly well behaved if treated right, but can bite if puffed too hard. Not that hard to keep burning at the correct temperature with the appropriate sipping cadence. Goes well with anthing that English blends normally go well with, but it's so entirely forgettable that whilst it shares some characteristics with the lighter English blends listed below, I can only give it 2 stars.

Similar Blends: Peterson - Early Morning Pipe, Samuel Gawith - Squadron Leader, It's not as good as either of these, but does share enough characteristics to be 'similar' in a broad sense..