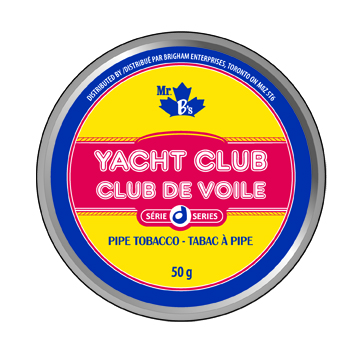 Notes: This tobacco is part of Mr. B's (Brigham) "D-Series", introduced in 2009. Reminiscent of one of the world's top brands, this pipe tobacco is a perfect replacement for an established favourite. If you like the famous Dunhill blends, you will appreciate the all new Mr. B's D-Series.

"Yacht Club" is Brigham's offering for Dunhill's "Royal Yacht". These were released during a time when Dunhill tobaccos were no longer in production. Due to French Canadian laws, the tobacco tin features both French and English. "Club De Voile" is simply "Yacht Club" in French. Since Dunhill tobaccos had been relaunched by the Scandinavian Tobacco Group, "Royal Yacht" was re-branded under Brigham's own flagship under the name "Hudson's Bay" as part of their "Legend" series.

ok - bit of a confession here - i bought this because i liked the tin. i hadn't done any research and it doesn't say what it is at all on the tin. The shopkeeper seemed keen to confirm that all her tobacco was very good and would provide smoking satisfaction (and I wasn't giving her much to go on) so this purchase was a bit of a lucky dip. All turned out well - opening the tin evoked distant memories of leather and willow and the school cricket pavillion. The tobacco was very moist and I struggled to keep it alight initially but I had some really enjoyable smokes with this in the bowl after the tin had been open a few weeks. it seemed to work best for me outdoors rather than in and on colder days rather than warmer ones - full of flavor, it is a very dark virginia blend and very marginally related to the lighter straw colored virginia blends such as Capstan Blue that I personally struggle to appreciate. I will buy again but difficult to find from any US internet retailers and the Canadian ones charge somewhere around $30 for a tin so not a cheap option.

Age When Smoked: New to 3 months

If you like strong natural viginia flavor then this might be the smoke for you. When I first opened the tin the I found the smell of fruit and figs to be intoxicating. Upon smoking my 1st bowl I found it to be a rather uncomplicated smoke that did not develop much over time. This was suggested as a change of pace for the English lover (which I am) but I found the flavor to be too simple.

Very nice tobacco. Similar in some respects to Peterson's Irish Flake, but with a little more substance.

The tin smells rich. Very much like sun ripened raisins. This tobacco was very wet when I opened it and benefits from some drying, but if you are impatient you can still smoke it right out of the tin.

Every sip of this tobacco is a full flavour experience. Complex and unyielding, the rich tobacco flavours fill your mouth with every draw.

I've heard some people complain they were knocked out of their chairs by the nic content. I haven't noticed to be honest. I still find the Irish Flake to be stronger, with slightly less flavour than this blend. Two thumbs up!

There were a few of the now out of production Brigham blends that I enjoyed and I wish I had purchased more of Yacht Club. This one was unabashedly R.L. Wills take on Dunhill's Royal Yacht. The tin art was very similar and the strong Virginia made the knees tremble. The broken flake was not nearly as complex and smooth as Royal Yacht, but the strength similarity was indeed there. The only thing missing was the secret casing that Dunhill squirted on The Yacht. I sure would have liked to see how this one morphed after aging.