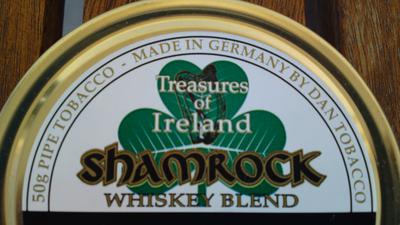 Notes: The cut may not be described easily using the 2 pre-selected "options" because it seems to be a rough rough cut, with coarse and ribbon, bigger size, mixed together with some ready rubbed stuff.

NOTE: this is a Dan Tobacco blend; Treasures of Ireland is a series, not a brand. Mod.

ToI Shamrock reminds me of After Eight chocolate thins. It smells really sweet out of the tin of dark chocolate and mint. The expected Irish whiskey remains a treasure yet to be found. The toppings are much more discrete when smoked, the tobaccos add some spiciness to the taste of honey (as mentioned in the catalogue in addition to the whiskey) on a malty, creamy, minty background. Good strength for an aromatic, low maintenance, but a little bit of moisture.

The room note is surprisingly spicy and does not have much in common with the smell from the tin. I find it actually not that bad, if it was only called or described differently, maybe even subtitled “After Eight to smoke”… but then again not an Irish tribute anymore...

Age When Smoked: fresh to 2 yrs

This is what I call a perfect "waiting room" tobacco, you could smoke tons of this stuff without being annoyed neither by extreme Nicotine Punch nor too much aromatization, even if, on opening the tin, strong scents of honey & whiskey rip apart your nose. Surely I'm not into aromatics that much, so I think I'll finish this one but I'm not sure I'll buy it again: don't misundestrand me, this is not terrible nor "chewing gum like tobacco" but it tends to be very very sweet for the first third of the bowl then flavour, sweetness and almost everything thrilling about the aroma turns off, leaving you a bit disappointed. Maybe I'll try another tin in the future but I'll make it work only in union with some Sweet Vanilla Honeydew and adding some kentucky punch, even to round it a little. The strange strange thing and interesting scent about this tobacco is that, shortly after opening the tin, it seems the the amount of different flavours added bumps out some Mint, full behind honey...don't ask me how! Somewhat recommended...

In keeping with the Irish theme I've been using this to break in my new Peterson St. Patrick's Day 2020!

The tin let out a mighty hiss when I opened it up. A cracking sign! The blend has a fragrant aroma, sweet yet sharp. The cut looks unique, I see cubes, ribbons, a few 'sticks'; a bit of a Mixture! It contains 3 colours, all equally disseminated throughout the blend; light, medium and very dark brown.

The smoke? Rather effulgent! From the toppings there's plenty of sweetness, a little alcoholic redolence and a sticky creaminess. The tobaccos compliment the aromatic sweetness very well. Sweet, fruity, Virginias with butyraceous, almost clumsy, black Cavendish. Overall the first quarter has more vibrancy than the subsequent smoke. It calms down a little taking on more of a quiescent character! The burn from this is good, consistent and cool.

Shamrock? I note it's only received Somewhat Recommended up until now, but I like it! Three stars:

Hello. I agree that this one just sound like a medium virginia but the tabbaco is not as good as could be a rattray for exemple. The flavor is maybe just an excuse because not very tasty. For sur not a bad one but as the precedent rew say, maybe a good tobbaco when your favorit one is out of stock and you have to wait next day to have it.

I'm afraid Ireland may still be hiding it's treasures. This was just an OK whiskey forward Aromatic. The added honey or Irish Mist (whatever that may be) helped to bend the initial Whiskey tin aroma into something less "cherry" (a flavor I often mistake Whiskey topping for).

It did not strike me as a ready rub cut, having no long unbroken tendrils, rather there were typical ribbon flakes with a few chunky pieces (with a few cubes for good measure) tossed in. Shamrock was about as dry as I like my tobacco, though most will find it spot on. Fired up with ease and kept rolling to the end.

The puffs are pleasant enough with some Whiskey heat to the vapor, without coming off as a frilly Aromatic. Again, I tend to think Whisky smokes push a Cherry flavoring, which this one did not. It was very easy to smoke and not terribly robust... which I kind of enjoyed.

This was a hard one to rate. On the one hand I was let down by it being fairly flat, but on the other I was happy to have candy mingled in.

Has a very nice sweet aroma, very smooth and personally I love the favor. Must admit I am kinda new to pipe tobacco and will have to try more to write a better review