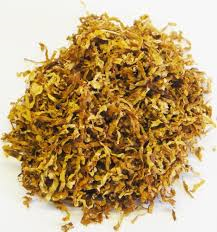 I don't like the pouch-note, it does smell of bananas, but not at all natural: chemical, false, and sickly.

As it's loosely pouched, the moisture's good, so I can pipe it right away.

The smoke has a good hit of bananas to it; not chemical-like how I found the unlit aroma. It tastes to me, more like the desert I used to have as a kid: bananas in custard. I wasn't expecting to like a banana tobacco, but it's good!

Because this is a shag cut blend, it can burn fast; by going easy with my puffs I can double the time I have to enjoy it.

I find the nicotine quite mild from KBG, it's not really mild, but about right for me.

This is quite a surprise; I couldn't have it in my rotation, but I'd still recommend it.

Banana up first and it's an odd one...

First of all, the quality of the leaf is above reproach, although the taste of the unflavoured gold is a bit flat for my preferences this seems to make it well suited to working with added flavours.

The added flavour here is very natural so look elsewhere for banana candy tobacco. The strange thing is that the taste they have given it isn't of the flesh of a banana but the dry tasting pith that you find between the skin and the meat. It really is an excellent and exact representation of it but when I want a banana I eat the meat not the pith... (You could say the flavour takes the pith!!!! Sorry...).

As with all shag cuts packing in stages with more than usual firmness gives an effort free and long lasting smoke. Overall this is a good tobacco with many perfect smoking qualities and as for the taste; it's not horrible but you really have to be ok with it because it is constantly very present in the smoke.

It's odd but not bad. I can't see myself buying it again though.

Wow is all i can say.

I have bought a few loose tobacco's to jar lately to build up my tobacco library/bar.

I was intrigued by the excellent review below and knew this was going to be one i had to try. It totally delivered according to how my minds eye(or minds palette)imagined this would taste.

Made by gawith and hoggarth a brand i totally trust from smoking some of their really strong and potent offerings,this is quality as well but with the taste on the other easy end of the taste spectrum.

I consider myself a serious non aromatic smoker for the main, but i do make a few exceptions sometimes and have a few aro's on hand for when the aromatic urge strikes.

The appearance and handling of this reveals a quality product. A totally yellow golden blond shag of thin ribbons,fluffy,moist and pliant but not sticky and with a realistic genuine freshly peeled ripe banana aroma.

Lighting is easy and produces a naturally tasting toasting sucrose sweetness on the tongue. The taste stays consistant down the bowl as well as the cool smoking properties and clean and no dottle nature.

I smoked this in an unknown brand vintage butterscotch stem and brown bowl bakelite nosewarmer(WDC pipe?)

Such an honest well behaved tobacco.This is the bright unspoiled virginia i have been seeking but have only tasted so far in small amounts in other mixtures. The tobacco has a golden cornflake/cornflour golden virginia purity like nectar. The added banana essence adds to this yellow experience,to produce a combined taste that makes the banana seem a part of the tobacco or the tobacco a part of the banana.

The room note is fantastic and just like the taste,also when i leave the room and re-enter the smoke has no rotten sweaty leather shoe factor or any cigarette-ish eye stinging properties that other blends can produce.

Easy on the eyes,nose ,tongue and ears(you won't get negative comments except from anti tobacco health freaks).

The room note is akin to a banana fritter(banana in a deep fried batter). Hard to say if its a casing or a topping because it burns so clean i am inclined to think its a topping essence.

Even without the banana factor you still have a really good basic tobacco underneath.

This is pure virginia which tastes in my imagination as the archetype of natural tobacco itself(mother tobacco). All my other tobacco's seem fortified and processed which although interesting smokes, i have wanted to taste the quintessential example of a non mixture,non processed,elaborately cured,pure virgin pipe tobacco that you would taste if you grew your own and pulled a fell leaves to dry and tried it in your pipe.

This should of been my first pipe tobacco i feel,and its also a pleasant choice for experienced smokers like myself who like the look of aromatics but who have had bitter taste experience with them.

I totally like this simple tobacco and the banana topping creats a nice fruit overtone to the golden buttery virginia. This isn't a smoke thats going to offer much to smokers seeking a moody visionary experience.This is the rising sun and glowing warming rays of spring and youth.

For myself or any curious visitor who wants to try a first blast on a pipe,i totally recommend this because it tastes true. No tongue bite,bitterness or soap,and what micro amount there is of soap there is (if any)is more like a gentle sweet baby shampoo.

I have a use for this tobacco in my rotation for certain and will keep a jar on hand.

Three stars for being the aromatic that i wish other 'aromatics' should of been.

I may try some of the others in the range actually(some medium and darker tobacco's),but i feel i will just keep to this banana and bright virginia combination because i don't want too many aromatics with exactly the same tobacco base incase i get bored,but as this is,it offers something very unique to assert its own persona amongst my other heavier company.

I have been going through my cellared jar collection lately revisiting some old friends and enemies with my Falcon, Alco, Brentford pipes which are my established favourite tasting pipes out of the 200 or so pipes I possess - I have tried more pipes than tobaccos if I am honest, but that's another story for the private science of my own pipe review explorations, and not here.

Some tobaccos have a shelf life where they get worse with age; some keep well and preserved where they taste as good as first smoked;,Others improve in ways where they taste greater than their initial purchase price and equal a genuine investment.

Oh dear what has happened here? I have had this tobacco perfectly sealed and preserved in an untouched kilner jar for 5 years. Visibly it had darkened off and I was looking forward to a ripe mature Virginia tobacco of unique banana taste. Opening the jar and taking a sniff I could smell that this was sour and I don't mean citrus. Unfortuneatly this sourness translated to taste ;it was metallic sour and I feel this tobacco perhaps by its own flavouring has self spoiled itself. It was also very bitey.

I had high hopes for this because it is a G&H brend and I really like some of their other products which age very well. This has not aged well at all and represents one of those tobaccos that has a shelflife before it goes downhill.

My first review was over enthusiastic due to the novelty factor, I gave it 3 stars too early. I also lied about the bite factor; it didn't bite strait away ,but after a few bowls you would definitely be bitten.

With age the bite factor has augmented.. I tried as a desparate measure to toast this tobacco in the oven to redeem and transform it in the hope of altering its ph acidity or alkali properties to neutralise it.. This didn't work; although it was less sick the bite was persistant..

This and Sherlock Holmes by Peterson is the only tobacco's I have ever chucked in the bin due to getting worse with age.

Being a 'banana' flavoured tobacco you cannot use it as blending material;putting perique with it is a waste of perique because the bad taste remains.

Downgraded from 3 to 1 stars

Purchased From: Online one time.