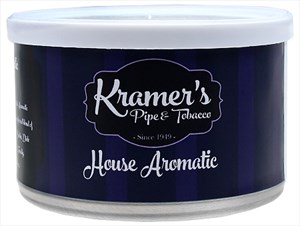 The topping is sweet Irish with a very slight sour note, and tones down the tobaccos to a moderate extent. The burley provides a slight nuttiness, wood and earth as the lead component. The black cavendish adds a light sugar note. Hardly has any nicotine. The strength and nic-hit are mild. The taste is a couple of steps past that mark. It's an all day smoke with a very consistent taste that burns clean at a reasonable pace, but it may bite if you puff hard. Leaves a little moisture in the bowl, and requires an average number of relights. Has a short lived, pleasant after taste and room note. It's pleasant enough for the mild aro smoker, but overall, suffers from lack of body and flavor dimension.

House Aromatic from Kramer’s is another old style American aromatic blend. Like Cary Grant, the topping doesn’t get in the way of the tobacco flavor. The TR description of House Aromatic lists only Cavendish, but Burley is for me what dominates the tobacco flavor. The topping is lightly added and is sweet, but HA doesn’t have the bolder flavor of Kramer’s Cary Grant blend. It can burn hot if pushed. House Aromatic isn’t a bad blend, but wouldn’t be something that I would pursue in the future as it doesn’t stand out in the crowd.

Purchased From: Kramers Pipe and Tobacco

Burns hot with little taste and a average room note. I smoke aromatic blends this is one of the worst I have tried, tasteless and hot burning

It's quite a coarse mixture that includes a few pieces of broken flake. The aroma from the pouch is a little aromatic, but not overly so. It's a medium brown blend with a few lighter and darker specks. Moisture's good.

The smoke's good, but nothing special. The Burley accounts for much more flavour than the Cavendish, being nutty and rustic. The topping comes across as a definite taste, having some alcoholic piquancy, but isn't too heady, at all: mild. It burns fairly cool but can sneak a bit higher if it's pushed too hard.

So, I tried Kramer's Danny Kane blend a few months back and enjoyed it enough to order up some of their other blends. Being a Aromatic fan, I wanted to try their House blend (which apparently uses more mysterious Irish Mist).

As before, the 'Mist' offered a bag aroma not unlike Danny Kane's. It has a slight spice and brightness without any sweet flavors (chocolate, vanilla, caramel, etc.), allowing the nutty Burley through. The cut has nice solid beefy ribbons, is a bit rubbery, not damp, and packed densely causing some air flow restrictions. The first few puffs have a zest (the Mist at work), though still no specific flavor, that floats over some natural tobacco taste.

I had no issues smoking this House blend, yet while being an Aromatic, the lack of a distinct flavor caused my to wonder who the audience would be for it.