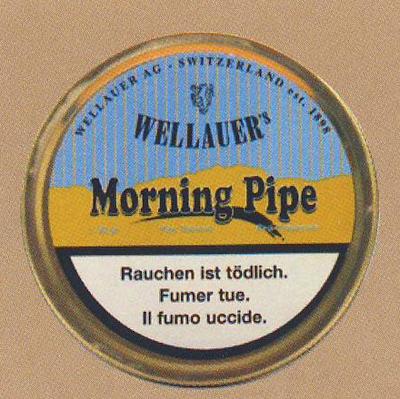 Classical English mixture with not too much latakia, high grade Orientals with slightly toasted bright and red Virginia.

Although the country they operated out of (Switzerland), was known for flavored tobaccos, this brilliant old blending house went against the grain by producing some of the finest English style blends ever produced. And believe it or not Wellauer & Company also was known for its brand of chocolates and other confections. The only way I could get their tobaccos back in the 1980s and early '90s was to swap tobacco with an old Pipe Smokers Ephemeris member who had me send him tobacco he couldn't get there.

Morning pipe was certainly the same style of tobacco as its Dunhill namesake, with a rather heady Latakia and Virginia combination mixed with some Orientals to awaken the palate. My notes from back then indicate it was a heavy broken flake with a much stronger Latakia and Nicotine presence than Dunhill's Early Morning Pipe.

First of all, this is “normal” ribbon cut, and not a broken flake as mentioned on the head of the page. It must be an error. I remember having smoked it in the 80ies and to my knowledge it has always been a mix of fine and medium ribbon cuts.

Wellauer Morning Pipe (WMP) is a typical, classical English mixture of above medium strength and full flavour. There is everything there to make it worthy of its type of being an English mixture: Virginias, Orientals and Latakia.

Given its name “Morning Pipe” automatically leads to comparing it with the famous “Early Morning Pipe” (EMP) of Dunhill (now Perterson). Well, I leave this up to you, it is a matter of personal preference, I like both. To me the WMP is slightly stronger, but it is also a more straight-forward, more basic English blend so to say. Whereas the slightly lighter EMP is a little more complex, has a few more side aromas to dig in and is more rounded off. Both blends are delicious. No problem to smoke several bowls in a row, no bite or sharpness.

The company “Wellauer AG” (founded in 1898 in Switzerland, and still going) has some underrated, interesting pipe tobacco offerings. Wellauer pipe tobaccos were blended to order by PLANTA (in Berlin, Germany). Since PLANTA went out of business on the 31st August 2019, MacBaren took over and will continue to produce some Planta tobaccos in Denmark. But that’s another story. At this moment it is unknown where Wellauer's mixtures will be blended in future.

This blend is identical to Peterson's (formerly Dunhill) Early Morning Pipe. To quote my review from there: "[…] a very agreeable, easy-burning English blend that may very well be the day's first pipeful. […] I can't make out any of the claimed Oriental; the VAs and Latakia are obvious enough.

Today, I would recommend this blend. A good, straight English. Not truly exceptional, but certainly a very good standard one can come back to when other options are unavailable, due to its good availability (where I am)."

With some of my favorite tobaccos no longer available (Artisan Blend, Squadron Leader, ...), news that Dunhill tobaccos are no longer produced came as another blow. EMP, Nightcap, Aperitif, 965 - all gone?

My tobacconist has stocked Wellauer‘s blends for a long time, and said they bought the license to produce some of the Dunhill blends. As I had asked for EMP, he suggested I try Morning Pipe (without the Early).

So I did. And right away my taste buds signaled that this is not a replacement for EMP. For one (and the omission of Early suggests it), this is very mild. A tobacco for the morning and maybe the first pipe of the day, while EMP was a tobacco for the wee hours and maybe a day‘s last bowl. Next, there is too little noticeable Latakia in this blend, Orientals stay in the background, Virginias dominate. I actually wondered if this was an English blend at all.

That said, MP is a pleasant, mild smoke, and if you don’t expect it to be a clone of EMP, it may give you a nice surprise.

i never got the chance to try the original dunhill EMP, but this seems to be very similar according to common opinion, so now i understand why dunhill EMP had so many fans.

a nice, mild and pleasant smoke for the early day

A nice blend with a nod towards the Early Morning Pipe, which is not available here in Switzerland. Nice English blend with a pleasant Latakia nose. Very satisfying nicotine. Burns nicely to ash and easy to load in the bowl. The middle part of the bowl is nice and nutty. A nice and simple way to wake up especially with a cup of coffee, also good after lunch. I have enjoyed smoking it in the lightly falling snows of early December. Not sure if you get this outside of Switzerland, but worth a try if you can.