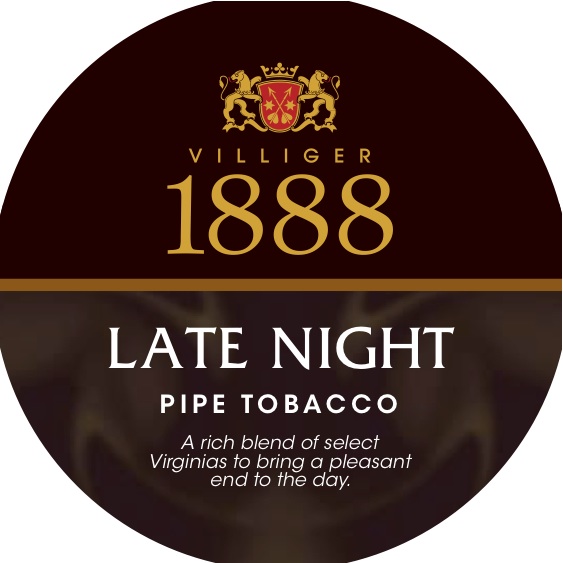 A sweet, satisfying blend of select Virginias and Black Cavendish flavored with Irish Whiskey to bring a pleasant end to the day.

Notes: Villiger is a Switzerland based cigar manufacturer specializing in the Dominican leaf. They have merged with Stokkebye and produced pipe tobacco under the label Villiger 1888.

As this is Villiger 1888 and I tasted no differences between this bulk and the tin version, I'm repeating the Villiger review here.

The Virginias are citrusy, and a little dark fruity with some earth and grass notes, and are the major tobacco components. The fermented black cavendish adds a smooth sweetness. The Irish whisky is more obvious at the beginning than at the finish, where it becomes more of a suggested flavor. The same is true of the honey, which notice a little less than I do the whisky. Both toppings are mildy applied. There’s a mild spice hit, and while I’m not sure where it’s coming from, I suspect it’s from one of the Virginias. The level of the spice varies throughout the smoke. Has a mild nic-hit. Won't bite. Burns at a moderate rate, cool and smooth with an inconsistent flavor. Leaves very little moisture at the finish, and needs a few relights. Can be an all day smoke.

I really liked this blend, perhaps as much as Peterson's Irish Whiskey, which is a long time favorite. I could taste the whiskey just a bit more than with the Peterson's version, but never did taste the "honey" that reportedly has also been added. What I also really liked about this blend is the fact that the Virginia taste is so at the front. And quality Virginia to boot. No heat with quick puffing and I liked that because the super flavor of this one does raise the suck and puff meter.

I am an SG 1792 zealot and have had a difficult time finding it recently. The silver lining is that I've been on the hunt for alternatives and was recommended this new blend by Villiger. That said, my review should be taken with a grain of "Dark Virginia Flake" salt as those are the baccy's I gravitate towards.

"A sweet, satisfying blend of select Virginias and Black Cavendish flavored with Irish Whiskey to bring a pleasant end to the day" is what is printed on the can. It is a fairly accurate description. I was initially put off by the "black Cavendish" description as I really do not normally care for it but my local shop assured me they had had the same reservations but found it to be quite mild. They are correct.

Upon opening the tin, I was met with a light pre-rubbed tobacco with some dark flecks. The smell immediately put my mind at ease about the Cavendish as I can only slightly detect it. It has a hay like smell with hints of moist wood in there too. It was neither overly moist nor dry and it packed in the bowl more easily than my normal flake tobaccos which I admittedly don't rub out well sometimes. I had several false lights and had a difficult time keeping that first bowl lit until after I had tamped and fiddled with the bowl quite a bit. (Subsequent bowls lit easier and stayed more evenly lit as the tin has dried slightly).

The smoke initially is quite sweet and the Irish Whiskey that this tobacco is cured in comes through nicely. The bowl matures to a light and pleasant smoke. It's fairly mild with slight sweetness poking its head around out of what is otherwise what I would describe as a stout hay smoke. Despite the smoke's lack of what I would call heaviness, it is a full mouthful...fog rather than smoke.

I milked it a bit too frequently, perhaps in search of the nicotine and mouth feel that I'm accustomed to, and as a result I got a bit of tongue bite and had to slow down. The more I relaxed and just "sipped my tea", the better the taste and more pleasant it was. This is not a nicotine heavy smoke (at least to me) but rather, as the tin description and name suggests, a pleasant late night mellow smoke. Interestingly, my wife asked who had been smoking cigarettes after I had finished and I suppose that too speaks to the nature of this light colored and loose tobacco. It does have a pouch of good "roll yer own" cigarette tobacco flavor.

Overall I'm enjoying it and plan to keep it in supply as an alternative to my heavy hitter normal blends.

**Update- I've smoked this for a week now and regardless of how slow I toke it I cannot avoid tongue bite. The flavor is nice but the throat and tongue feel leave me cringing. I've altered my recommend from "recommend" to "somewhat recommend".