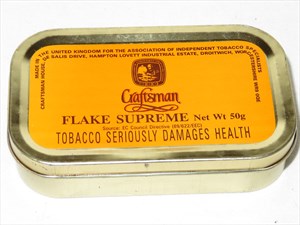 This is or was blended under the name of the Association of Independent Tobacconists of Britain (AITS). In the early Nineties it was available at a number of tobacconists, rather than at newsagents, at least in the East Anglia region (from Cambridge to King?s Lynn and Bury St. Edmunds).

It is a slightly scented mild Va. flake, cool burning, but IMO far too bland. However, it is an economic alternative to Va. flakes from more traditional brands. In fact the AITS designed a triad of tobaccos to cover a conventional range of pipe smoking. Together with Flake Supreme (the straight Va. Choice) there is a mild black aromatic, and a medium to full Latakia blend completing the group. I think the range was designed to attract a younger generation of would be pipe smokers.

Flake Supreme is, to a great extent, a milder version of Orlik Golden Sliced and similar to Radford?s Sunrise Flake IMO it lacks body and structure, and the mildness of the Virginia leaf used here is barley countered by a flavor not unlike those semi sweet biscuits the English are so fond of. I don?t know if there is any Burley in FS, but at certain points of the smoke you get a similar nutty and grassy note. As a beginner?s smoke FS may be nice and inviting. Palates used to stronger weed may find it tongue biting and dull. I used to smoke it every now and then, especially when I had a cold, because as I could not distinguish flavors anyway, it was not an expensive nor an irritating smoke.

An inoffensive virginia flake, rather like Dunhill flake, but less tasty.

The flakes are quite dark, with a dried apricot smell in the tin, they tend to be a little ragged on the edges. It rubs out without any trouble, an is no problem to pack. Lighting however seems always to take me three vestas, every time, if I am to get a nice even light. After that however it stays lit no trouble. It comes a little moist in the tin, and sometimes burns wet, so its a good idea to have some pipecleaners on hand. The room aroma is this tobaccos best feature. Its very light and fruity, but natural and uncased. Quite aromatic in fact.

As to the flavour, the less said the better, simply because there isnt really a lot to say. Dull is the only way to describe it. The Dunhill light flake is a very similar but far superior example of a pure virginia flake tobacco.

I bought a tin of this from J. Fox in london a great shop were Churchill used to be a customer. I think they must have had this in stock since he used to go in because the flake had dried out in the tin. I was something of a novice in those days and did't view this as well aged gold dust. Even though it was dry as a bone it smoked ok and was very mild in fact one of the mildest flakes similar to Dunhill light flake but not as good. The tin has a happy looking chap on the front. I have never seen this anywere else other than at J fox and I bet if you were to pop in they will still have a couple of tins, which by now will be eligable for a chelsea pension.

This is based on a open 30 yr old tin I thought was empty. It was on display and open I had to refresh it for about a week. Anyway I found this to have a deep flavor with a slight cigar aroma. To me it smokes great, I'm finishing it as I type. It has a great ash and I'm smoking it in a Pipeworks full bent freehand. I must say this is a great trip and I have maybe two more bowls left :(..........but I really enjoy it. Wish I could get more!