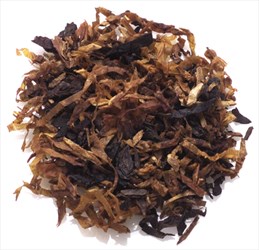 Orange ripe Virginia from Africa, Brazil and USA. A small amount of mild Burley is added together with traditional Black Cavendish. Medium loose cut. Distinct cinnamon together with pure vanilla and other spices. Sweet. Most enjoyable without further blending.

On opening the pouch, the aroma of cinnamon really stands out, but it is short-lived.

This is an extremely mild blend. Not much flavor, but what there is was nice and sweet... not sugary, but like a good Virginia should be...just a clean mild taste of sweet Virginia. I couldn't taste any cinnamon, and only a little Cavendish, but I also didn't taste any chemicals. The room note was just a hint of cinnamon, but mostly just a clean generic aromatic smell.

It lit and burned well, with little dottle or moisture. No relight was necessary, and it burned cool, with no bite whatsoever.

It's an OK all-day smoke, but just a little too mild for me.

This is not a bad blend. Just not one of my overall favorites. I do smoke it every now & again. I really do not detect much of a room note until very late in the bowl. & not really much taste at all to me.