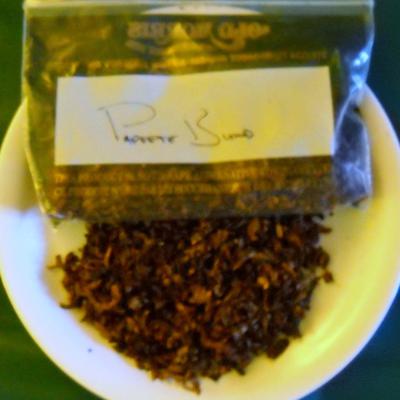 A light Cavendish with an unusual fruity flavour that does not overwhelm. The manufacturer describes it as coarse cut, but I would have said medium, with a mixture of short cut ribbon and cut flake. The colour is lighter than it appears in the photo.

The flavour and room note have been likened to pineapple, but I would say something more exotic such as mango. It has the least tongue bite of any tobacco I have tried. The character is subtle and may not be apparent on a first smoke, especially if you are used to more aggressively flavoured Cavendishes such as the familiar "drugstore" brands, but it grows on one delightfully. It burns evenly, although like most cased tobaccos the tail end may be a bit sticky.

Besides being delicious in itself, this is also an excellent tobacco for custom blending. I often add some Black Cavendish for a spicier flavour that retains the bite-free lightness of the original.

This is a both a perfect tobacco for the new smoker and a refreshing alternative for the experienced.