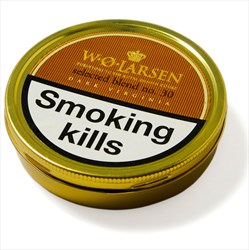 The Larsens Select Blend No. 30 is a ready rubbed, pipe tobacco, blend produced using the highest quality lemon & bronze Virginias, which have been added to heavier Virginias noted for their cool smoking properties. These carefully selected tobaccos have then been complimented with a unique piquant aroma top dressing.

Notes: The W.O.Larsen select Bland No. 30 was introduced to the UK back in 2008 as an exact replica of the Dunhill Royal Yacht pipe tobacco.

This was developed by Orlik in 2010 as supposedly a replacement for Royal Yacht, which at that time was still in its hiatus. However, they tweaked it a bit to avoid conflict with dunhill.

Yes, it has the texture of Royal Yacht, but not the same flavor. The flavor is more akin to Elizabethan in my book! But it is a stronger, bolder flavor, as Elizabethan, with a little perique, was mild to medium to me.

Recommended as a cross bewteen RY and Elizabethan.

Love it !I purchased this as an impulse buy..I like FVF as a main smoke .this is a great tobacco for anytime of the day and I have to say FVF would be my "desert island" choice ..however this tobacco is great.. burns straight out of the tin, seemed a little dry at first sight but the tobacco lit and smoked beautifully..I like a strong flavoured tobacco ..royal yacht being one of my all time likes..this tobacco burns to the bottom of the bowl.. and leaves a wonderful grey ash..highly worth a try and don't form an opinion until you have smoked at least 3-4 bowls full..great stuff.

My first time with this and I agree with the previous reviewer - it is unusual to find a Larsen blend that has no casing whatsoever so with the first hurdle behind me I proceeded. Nice broken flake on the dryish side with a rich virginian tin aroma. I would classify the strength as more on the strong side rather than medium.

A sweet virginia background that is not over-powering enters about half way through the bowl and it burns to a dry white ash as you would expect from a well matured virginia - no doddle and a dry pipe at the end of the smoke. I found it smoked extreamely cool all the way - no smarting of the tongue. The nicotine hit is not so much a punch but definetly a slap in the face - this is not one for the beginner but will readily reward those who like a rich, satisfying straight virginia with memorable strength and enough 'N' to rate it half way up the richter scale.

I must go to 4 stars on this: it just gets better and better and a very cool smoke that packs a punch in a very subtle way.

The tin say's Dark Virginia. That's it. I have only tried one other Larsen's Selected blend which was not very appealing, this I'm pleased to say is considerably better, I do not detect any of the Danish toppings of caramel or honey, which was an immense releif I might add.

On opening the tin I find a coarse cut / broken flake, think of McConnell's Scottish Cake. I tend not to sniff the tobacco as I always get it wrong and in some cases, it can be downright awful.

I was still in the shop where I bought it and was encouraged by the owner to open it as he'd never had it on sale before and was interested.... even to the point of allowing me to light up. Amazing.

We came to the conclusion I was sampling a new tobacco, even though I had paid for it. It was therefore legal for me to do so. Even here in England, land of the overtaxed and nanny state.

So there I am, loaded the pipe and lit with a single match, straight from the tin. I was hoping for a rich sweet virginia with the strength of a lion, I was soon dissapointed, I got a barely medium virginia with the claws of a mouse.

However, it did behave, and taking into account that for me, it's still a little too cold here to be playing with virginia's that are not leaning more to the robust, it was still a very pleasant if undemanding and perhaps monochromatic smoke.

I have since smoked several pipes of this, each burning down to a nice white ash. DGT's without issue, therefore no casings, and if a topping has been added it is most discreet.

Although this will not for the moment, enter my rotation, I can see the possibility of this blend coming to the forefront later in the year as the temprature rises, that and for me, it's easy availability, I will most likely buy more.

If your looking for a mild to medium virgina, with no bad habits, uncomplicated taste and reasonable strength, quality tobacco and bite free. Then by all means, this is worth a try, and who knows, later in the year, at least for moi, it may become a regular.

Decided to upgrde this to 4 stars as it's proving to be quite tasty without being overpowering. As it's easily obtainable for me, I wn't be stickpiling, but one tin open and another to the side, will be the norm for me.