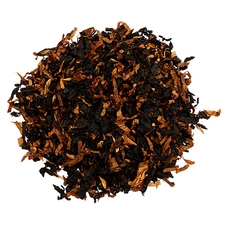 Black Cavendish plus light Cavendish specially flavored for the full taste enjoyed by the majority of today's smokers.

Notes: This was an Amar Blends Co. mixture. Cornell and Diehl bought the rights of all their old recipes.

The black cavendish offers some brown sugar and dominates the nutty, earthy light burley cavendish. The whiskey topping is the most obvious topping, but I get a little nougat and chocolate as well. The latter two are condiments, and all the toppings sublimate the tobaccos to a fair extent. The strength level is mild while the taste barely passes that mark. Hardly has any nicotine. Won’t bite or get harsh. Burns cool and clean at a reasonable pace with a mostly consistent flavor. Leaves little moisture in the bowl and requires a average number of relights. Has a short lived, sweet after taste. An all day smoke.

The blend includes about an even amount of each of the two tobaccos but sadly it arrived damp. Although the pouch-note is governed by the whiskey there's a sweetness indicative of something sweeter than just the whiskey. Caramel, maybe.

The whiskey's the strongest topping, but like in the pouch' aroma there's a touch of something sticky and sweet. Although the black Cavendish gives the leading flavour the smoke isn't sludgy, or too clumsy. The nutty, light Cavendish is slightly coarse and prevents the black Cav' from hogging things. It burns nicely, cool and quite slow, without any tongue bite.

Cap's Blend? I don't find it as bad as the reviews to date! Recommended:

It has been a couple of years since I've posted any C&D blend reviews and I have smoked nearly 100 tins of their various offerings in that time. So, it may be awhile before I get to all of them. Cap's blend comes a dime a dozen around the USA. Seems every tobacco shop you go into has a Black Cav with some kind of whiskey flavoring. I would swear that this is Smoker's Pride Whiskey as it tastes the same to me. Nice little bit of strength, quality Black Cavendish style Burley and whatever whiskey flavoring it is that is passed to shops around the country. The leaf was steamed to the point that it had no teeth (can't bite).

I have pretty eclectic and varied tastes when it comes to pipe tobacco. I smoke English, VaPers, Burleys...and now I am re-visiting aromatics.

This tobacco is just not for me. I found it harsh and artificial-tasting.

Forgive me, but I think that this should be renamed "Crap's Blend" The casing and leaf in this blend did not do it for me at all. The cavendish tasted green and the casing tasted like anti-freeze. Tried two bowls and gave up, much prefer #772.

I read the reviews and bought a small despite what I read thinking it can't be that bad. Well, it is. Like Jiminks, I also picked up some chocolate in addition to a whiskey-ish taste. I also picked up a slight fruitiness, maybe berries. It reminded me of Captain Black White, but maybe worse, at least as the topping goes.

Unlike many C&D blends this one is not dry. It is very moist, but smokes well and, surprisingly, does not leave much goopiness in the pipe. As to the leaf and its performance, there is not much to complain about so long as you don't mind small tobacco particles sticking to your fingers, tobacco mat, jar, et.al. IT does burn clean and easy right to the bottom.

It is the topping that repulsed me. I am not a fan of chocolate, so this already had that going against it, but this also has a terrible aftertaste to my tastes anyway. I call it the diet soda aftertaste as that is what it reminds me of. It is an acrid chemical taste that automatically kills an aromatic for me. This had that in spades and just spoiled every bowl for me. The topping overwhelms the leaf so there is really no redeeming features as to taste to me.

Other than its burning properties its pros are few. I will say that it doesn't bite and although it is low in nicotine by C&D standards, it seems to have a little more than most similar based aromatics of which there are many. I can't recommend this blend, but some people actually like diet soda, so you may. It all comes down to how this topping tastes to you. I will give it a weak 2 stars.

Was hoping this was an improved version of Captain Black White. Don’t know what happened but my wife and I could’ve sworn it smelled straight like sour cheese. Curdled cottage cheese maybe. Tasted like chemicals and overwhelmed both of us. Tried to smoke it through to not waste it, and was breaking in my new falcon. But man.... I’d say buy it just to experience the first cheese smelling tobacco.

I've been smoking Caps Blend for several years now. I buy it for a break from my usual va/per/ latakia blends. I purchase it in bulk and break it down into several smaller containers. I do not age this blend as aromatics generally don't improve with aging - in my opinion. I only smoke this blend in a Missouri meerschaum corncob because it will leave a residual taste / smell in a well aged briar. It will need to be dried out for a day or so before smoking. For best results pack it with medium compression - to tight and it smokes hot and wet, to lose and it smokes hot. Draws should be slow and steady. If done properly it will burn steady with no need to re-light, bowl of pipe will remain cool, no tongue bite and a nice white ash all the way to the bottom. I find it to be an overall relaxing smoke - with as much satisfaction as I get from va/per/latakia blends. I find this blend to be particularly suited for cold weather and in lower humidity. It pairs well with strong black tea and merlot wine. I find it doesn't pair well with scotch, Canadian whiskey or other similar spirits.

Age When Smoked: less than 6 months

I have been smoking pipes for 28 years, English blends most of those years. Recently my tastes have changed I guess and I was seeking something different. I stumbled upon Cap's Blend and have to say it is a wonderful all-day smoke. I get flavors of chocolate, whiskey, and vanilla dancing to the forefront while never completely overpowering the rich Cavandish. If you know how to properly load your pipe this will burn cleanly to the bottom with no excess moisture. If your an English or Va/Per smoker who isn't looking for an aromatic just pass this one by. I fail to see the need to review a tobacco style that you know you will dislike before trying it.