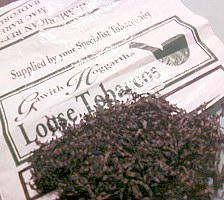 It arrives damp, but not as bad as some; that's you, Samuel Gawith!

This is primarily for blending, so there's not much to say regarding smoking it neat. It's a cool burn, gives thick smoke, doesn't bite, and has only a little nicotine. If not used for manufacturing your own blend it would be good if you want something to reduce heat and harshness without imparting lots of false flavour.

I agree with Juna Gu that this is a very worthwhile mixer (I don't care for it straight, though). It goes very nicely, I find, with Gawith and Hoggarth's Curly Cut and Broken Scotch Cake - two tobaccos that are rather lacking in flavour and body; also with Samuel Gawith's Medium Virginia Flake/Golden Glow. It's fun to experiment with proportions until you hit the nail on the head. Expensive fun, perhaps, but fun nonetheless. It might be worthwhile to add some to Ogden's Gold Block, too, though I haven't tried that yet.

I bought this for mixing, but I've tried it straight also. It's good. A ribbon or shag cut, not too fine, packs easily, smokes easily. Doesn't leave much residue (I have dried it out a tad) except perhaps a little sticky white ash speckling the bowl. The taste is smooth, cool and the strength is quite acceptable. A good smoke when you are feeling a little delicate perhaps. I've smoked it mixed with Kendal Kentucky, which makes for a nice smoke. Seems to do the job well.