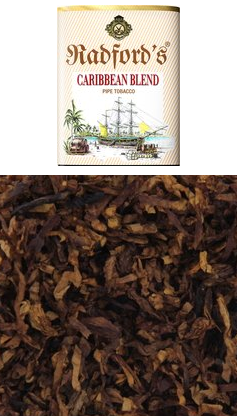 Radford's Caribbean Blend is a real pleasure with the unadulterated aroma of the Caribbean. Nutty, spicy burleys, sweet Virginias and tobaccos from the best provenances in the world have been refined with real Jamaica rum.

Notes: Formerly known as "Rum Royal", the name was changed to "Caribbean Blend" due to EU regulations.

The citrusy, lightly grassy, slightly floral Virginias form the base of the blend. The toasted, nutty, mildly earthy burleys play a second lead. The unsweetened black cavendish provides an undercurrent of brown sugar. The Jamaican rum is sweet with a hint of spice, but lacks depth. The nic-hit is very mild. Won’t bite or get harsh. Burns cool and clean at a slow to moderate rate though it loses a little of its flavor after you hit the half way point, and becomes a little muddled, though the floral quality is consistent from start to finish. Requires a few relights. Leaves a little moisture in the bowl, but no dottle. Has a short lived, boring after taste. Can be an all day smoke.

In Europe this is a typical gas station blend, for being available literally everywhere, incl. gas stations. Its very cheap and usually comes along dried out because nobody wanted to buy it. Those that do usually get suckered into it by the rather nice pouch design and the label "rum".

Upon opening the pouch you will be greeted by the smell of, yes you guessed it, rum. And luckily you also get some faint whiff of the tobaccos used as well.

Packing, lighting and burn all are easy. The taste is mainly sweet with a hint of rum every now and then. But the aroma wears of incredibly fast. Usually around half the bowl the best of it is already gone and what remains is mainly hot air.

This is one of the very few aromatics i got negative comments on for its room note. So i guess i have to give the room note a low rating.

The only reason why i do not give it 1 star but 2 stars is the fact that it is not an evil blend. Its just really bland and cheap and simply not worth being smoked.

So, should you be on a road trip in Europe and fresh out of tobacco but a gas station flies by, smoking this blend is better than smoking nothing at all. Else i would recommend staying clear of it.

Given the price of the package, and that I had previously found the other Radford's blends I have tried to be acceptable, I bought a pouch of this when I saw it.

On opening, the pouch aroma does not really hint at rum; I can make out the Burley with its cocoa note as well as something fruity/honeyish. The leaf felt somewhat dry at first touch, but that turned out to be OK. The mix is about 3/4ths bright tobaccos and about 1/4th Black Cavendish, all in longish ribbons.

Stuffs easily, lights easily, but I find I need the occasional re-light. The taste does not give me any indication of rum, either, but it's nicely sweet and nutty. Nothing out of the ordinary or overly exciting, but solid enough -- as is the room note.

There is a little spice in there, and RRR is not as weak as some other "cheap" blends. I judge this one to be worth the money, at least, and not a bad smoke. Also nothing extraordinary, but at the price asked where I live, I have to at least somewhat recommend; I may buy more of this in the future.

I've been looking for a blend that I can smoke on the go, as it's not exactly convenient to carry jars around or flakes and start rubbing them out. Just something ready to smoke, and this was pretty attractive to me.

The pouch note is pretty tame. A lot of nutty/walnut-y notes with a touch of rum. I also get a hint of something like hay in a barn. Somewhat artificial, almost like the smell you sense walking into a pharmacy, but it doesn't irk me. The cut is a nice ribbon and came at a good enough moisture, so perfect for packing straight away. Working with it is child's play and can be easily smoked down to ash with just the initial light.

As for the taste, there's not much in here, but that's definitely not the point. Don't smoke this expecting a symphony of flavors and aromas; just a simple taste, but quite enjoyable. The tobaccos are of decent quality and it's clearly Burley driven, with the Virginias taking a back seat. The rum is there and adds a little sweetness, but it lacks depth (though it does serve its purpose). Not much flavor overall, but not boring either.

At the end of the day, this one has to be accepted for what it is: a blend made to be smoked on the go. Just leave your house, stuff the pipe, light it up, go on your way, empty the ash, repeat. That's exactly what it's made for. As such, it's perfect for smoking while walking to work, during a break, when walking the dog and, generally, when doing something else. It's like the pipe equivalent of a sandwich or an instant coffee. For this alone, it's good to have around for such use and it will serve its purpose just fine.