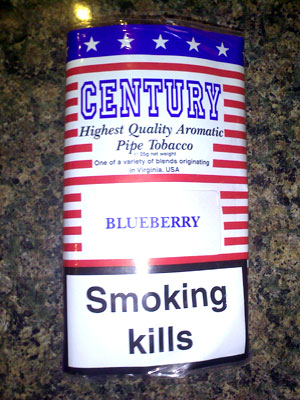 Notes: One of a variety of blends originating in Virginia, USA. The Century American Blueberry tobacco is a new ready rubbed tobacco blend of mainly cavendish tobaccos with an addition of some Virginias which is then enhanced by a blueberry flavouring.

The sugary black cavendish is the lead component. The grassy, citrusy Virginia cavendish is a secondary player. The tobaccos are great sublimated by the tart blueberry topping, which sports a distracting syrup note. The strength is mild, while the taste is a step past that level. Barely has any nicotine. Won’t bite or get harsh. may need a light dry time. Burns cool, clean and a little slow with a very consistent flavor that translates to the lightly lingering after taste. Leaves some moisture in the bowl, and requires some relights. Has a pleasant room note, and is an all day smoke.

I bought this on a whim, albeit assumed that judging by the cheap packaging, that this would be a total non-event. To my surprise, as aromatics go, it's on par.

I'm pretty certain that this is unavailable in the US under this guise, but I suspect that it probably can be found, along with the others in the range, under a different branding completely. Some of the Century range are often labelled with a 'B' prefix, followed by a tag number. This UK offering smacks, unashamedly, of 'import', and it's probably as close to a drug store blend as we could ever get in Blighty. You won't be surprised to learn that it's a full-on American style blend, either: a dark, no-nonsense cavendished tobacco with a generous, sweet topping.

The pouch aroma is mellow, yet fruity, and it's certainly a good subsequent smoke - but only if you care for aromatics parading in all their livery. Surprisingly, it's a pretty faithful taste of blueberry, rather than the repugnant 'bubble-gum' that many in the UK have come to like or loathe as an artificial flavouring. It also smokes fairly well, whetting the taste-buds with a fruity plume and creamy finish.

There are many that will hate Century's Blueberry, and it solely relies on its casing to give cheap thrills. There's not much in the way of pure tobacco taste with this, or delicate undertones, but then neither does it profess to be anything swanky, of which many brands are guilty.

I'd happily try another offering from Tabac - and there are a few to be had in packet form, ranging from Black Cordial to Columbian Coffee. And they're worth a punt if you want a bit of variety in your piping diet.

Tasteless, burns hot, disgusting! Total waste of money and now having to deal with tongue bite and clean my pipes. I do not find anything that I can recommend about this foul weed

Purchased From: The Pipe Shop Edinburgh