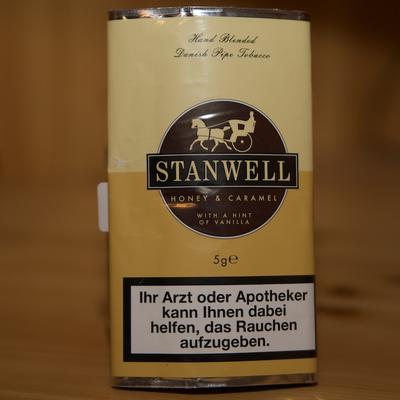 A mixture of black cavendish, some burley and a bright Virginia. Refined with the aromas of honey, caramel and a little vanilla.

Notes: Due to EU regulations, this is sold in some European countries as Sepia.

Got this for Christmas and tried it out shortly after. I immediately noticed the strong honey aroma in the pouch which was quite pleasant. The tobacco came a bit dry and I had trouble packing it, but it differs from pouch to pouch, I suppose.

After packing it, I fired it up and a pretty strong honey flavor came into my mouth and filled it with sweetness. Not the best kind of sweetness, but a strong, kind of chemical one. Anyway, smoking this normally, after Frank'ing the pack, it got a little bit hot and so I let it sit aside. Relighting it, the sweet aroma got a little more subtle and more enjoyable than it was. Still pretty cased, though. It's the second time I'm setting the pipe aside to calm down as it got hot again.

The smoke is enjoyable, but I recommend smoking it outside, or somewhere a bit colder, as the bowl gets pretty hot. Didn't get any tongue bite, though, which is pretty good. Room note is awesome. I mean it. It smells like honey. Couldn't detect any caramel or vanilla, but the honey is definitely there.

Overall I recommend this tobacco for aromatic lovers, but it really isn't for me. It's a once-in-a-while blend for people who enjoy English tobacco and want a change of pace.

I received a 50 g tin of this for Christmas. Upon opening the tin, I was greeted with a delectably rich honey aroma. The tobacco was a bit on the dry side for an aromatic, so I would recommend (re-)hydrating the tobacco a bit before smoking. Once I'd done the same, the leaf packed and lit well. The flavoring is not overpowering, but remains a pleasant companion throughout the smoke. This is a very "rich" blend due to the flavoring, comparable to a Port wine's richness. The flavor is...creamy and quite enjoyable.

This tobacco smokes well without gooping up your pipe. I would recommend it for cold winter evenings at the fireside.

All stanwell aromatics that I have tried, including this one, have tendency to severely bite my tongue if not smoked carefully, I am a happy "all-day" smoker of Mac Baren Mixture since over 15 years but still have tongue problem with stanwell blends, i think it is a matter of body chemical compatibility.

this is a good aromatic, not very sweet, there is some caramel and honey flavor here and there, the nutty burley is the main tobacco here, very good smoke with very good burley flavor, I like it and I would recommend it for everyone.

Great aromatic smoke. Some family friends sent me a pouch from germany. Nice and sweet without being too sweet. Burns nicely all the way down. Nice change up to smoke between englishes. This and davidoff Scottish renewed my faith in aros

I bought a pouch of this tobacco out of curiosity after the shopkeeper in the tobaccostore had offered it to me as one of the newly released blends. Considering the moderate price (5.85 Euro in Germany) buying this blend could not do much harm if it turned out to be unsatisfying. To my surprise the tobacco features a nice cake-like taste with a light trace of honey and a more pronounced note of caramel.(I guess that the vanilla note stated on the pouch is simply kept in the background by the caramel.) The flavor of the tobaccos used for this danish mixture works well together with the topping. The roomnote is sweet and features the vanilla note.

But as it was already stated by The German, the blend can tend to burn quite hot. Careful smoking is advised unless you want to burn your tongue. I would also have liked a stronger presence of the honey and caramel aromas because the smoke somehow tends to lack the richness and creaminess of other danish mixtures a bit.

In the end it is a tobacco that offers a good relation between quality and price. It might be recommended to those who seek a sweet aromatic tobacco but without an overwhelming sweetness. Might also turn out to be a nice all time easy smoke which does not need to much attention while puffing along.

PS: I usually smoke with filter, therefore I can't say how the experience may vary if smoked unfiltered.

Buying two tins of tobacco at a local mall, the clerk seemed to size me up as a potential big-time customer and gave me a few samples, one of them being three pipes' worth of this blend, which was accompanied by a brochure for the current Stanwell line.

This one was described as BC, Burley and VA with honey, caramel and vanilla. Opening the pouch, I was more reminded of cheap Sake and could not make out any honey, vanilla or caramel notes in the aroma.

The tobacco mix is about 85 to 90 % BC, the rest being pretty bright stuff in long ribbons. There seems to be a little ready-rubbed BC in there. Upon lighting, the Sake smell thankfully does not translate into taste; here, the caramel note does develop. While I could never detect any distinct vanilla note, the honey does stick its head out now and then during the smoke, which remains pleasantly sweet (and somewhat caramel-ish) almost to the very end.

At said very end, though, this blend turns tarry in taste and can burn nastily hot. I have not managed to smoke this weed without leaving at least some 'baccy unburned in the bowl, and while the taste is mostly nice, the pouch aroma is less than satisfactory and the room note rather uncomfortable. As an aromatic, there are far better ones out there, and in every other category, this stuff just doesn't make the grade for me.