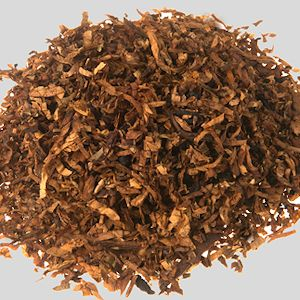 An 80% mix of 3 distinctive Virginias, Turkish Izmir in a minor role, and just enough Cigar Leaf for accent, gives this medium strength blend loads of unique flavor, and a taste that you won't find boring.

The Virginias are grassy/hay-like with just a little citrus and a light, tangy lemon zestiness. They are ably complimented by the woody, earthy, floral, moderately spicy, very dry and sour Izmir, and lightly tart citrusy and peppery, smokey, woody, herbal, earthy, floral cigar leaf. The last two components give some "ompf" and some complexity to the Virginias in an important support role. The strength is almost medium, while the taste reaches the medium mark. The nic-hit is just past the center of mild to medium. It's a perfectly balanced mixture that burns at a reasonable pace, cool, clean and relatively smooth with a consistent taste all the way to the bottom of the bowl. Won't bite or get harsh, and requires few relights. Leaves little moisture in the bowl, and the pleasant after taste lingers a little. Three and a half stars.

On the strength of one of the reviews here I tried Oriental Dusk (another Patton blend), having been on a recent binge favoring blends with VA/Turkish and hopefully Cigar Leaf. After having declared it a 'National Treasure' I moved on in my expolorations. The blends I was trying at the time (many without the Cigar Leaf) included Embarcadero (a classic), Butera Blended Flake, McConnell's Scottish Flake, Pebblecut (a real winner), C&D Oriental Silk (very nice, very light) and their Sunday Picnic, Red Carpet and Riverboat Gambler. The C&D blends mostly have Perique as the condiment along with the Turkish. There's also Captain Earle's Honor Blend, which is a plug. While saying that there isn't a loser among those fine offerings, I was still looking for something 'more'.

So with that as background I'll declare that if Oriental Dusk is a national treasure (as is Storm Front, representing a zenith within it's own genre) then Crossroads is absolutely a treasure in its own right. Through a fluke I learned a bit about the component ratios and roughly we are talking 80% VA (3 varieties), 15% Izmir and 5% Cigar Leaf...rounding a bit here and there. It is nothing short of a masterwork for my tastes and yet another little symphony created by the erstwhile Mr.Patton who is renouned for balance and the interplay of flavors. The balance of VA's put them in the background as a base against which the Turkish really has reign to shine...with the Cigar Leaf lending depth and roundness. Thankfully being lower on the "N" scale, it can be an effective all day smoke...and it's become one for me. It seems that Izmir has become the darling of many blenders recently and that's all to the good as it has so much to offer...but is sometimes finickey in it's reaction to it's fellow components and to smoking cadence. Here, it's to the fore and seems to be tamed so that it behaves well, at least for me. Sipped, this blend is pure Turkish Bliss, which well might be a byline for it.

Only a month ago Oriental Dusk had to be ordered as a 'special order' and in a half pound amount. While fine for me, many might not have even known that 4-N's would put together ANY of Patton's blends on order. Now they have made Oriental Dusk a regular offering, available in any amount. It couldn't have happened to a nicer guy. My only hope is that this one meets the same fortunate fate...for if you like blends featuring Izmir this one should absolutely be on your short list.

Blends that include Cigar Leaf always fill me with trepidation. Just enough can be a pleasant embellishment, but a lot of the time I find there's far too much of it.

Crossroads is one of the lightly embellished ones. I actually get more taste from the Turkish than I do the Cigar Leaf; this really is a minor addition. The flavour stays consistent throughout, and doesn't really alter any. Crossroads burns excellently, although it can be a little fast. If I puff too hard it bites me a bit, but I wouldn't say it's anything major.

The nicotine's medium, and the room-note's pleasant to tolerable.

This is one of the better blends containing Cigar Leaf. I couldn't smoke it all the time, but it's definitely worth a recommendation.

This is an unusual blend. A non-aromatic, mild to medium blend with lots of flavor. Normally, this would be a contradiction in terms, but not here. John Patton has created an exceptional blend in Crossroads. It burns cool and tastes delicious. The Virginias are first rate and the condiment tobaccos of Izmir and Cigar leaf support the Virginias perfectly. Very impressive indeed. As someone who likes my blends on the milder side, this is a real find.

Similar Blends: Nothing I have ever tasted before.

I recently finished the only 2 ounces of this blend that was in my cellar. I purchased this because I am a fan of blends with Cigar leaf. Most such blends are more on the stout side clinging to Latakia and/or burley to deliver a deep earthy smoke with plenty of body. This is not the case with Crossroads. I found Crossroads to be more about the Virginia touched with the Izmir and cigar leaf.

Neither the Izmir or the cigar leaf really stand out so much in their own right, but combine to offer a nice variation to the thin, sweet Virginia base. The three components do offer a bit of complexity with some shifting tastes throughout the bowl. I enjoyed this blend, but not to the level where I will crave more. Three stars.

This is not a sweet smoke although there is a little. It's more of a tangy sour smoke, the tang from the Virginias and the sour from the Turkish. The fruity notes lean toward citrus, specifically lemon which I pick up clearly on occasion. The cigar leaf is hard to detect. There is a very mild spice that could be from it, but could also be from the Izmir. I think it does add some earthy depth. There is a very mild topping/casing that is a little floral/vanilla like. Overall a pleasant smoke. Not one I would seek out, but it's very well done.

One of cigar-flavored V/O blends. I agree with fellow reviewer JimInks said:"The Virginias are not that sweet, but rather hay-like, with maybe a touch of lemon tang." However, I feel too much hay-like and some harshness and spiciness, which might come from the cigar leaf and the oriental. Don't know if aging may smooth it out, but this is not for me so far.

Coarse cut tobacco with yellow to brown and some darker strands that pack like a charm. The smell in the pouch is very nutty for a Virginia driven blend. It burns nicely, no relights thanks to the fact that I like my tobaccos either slightly dry or slightly moist. There are a lot of flavors in this mixture, a nutty, spicy dominance, with an earthy interlude. A creamy and dry smoke that has a perfect nicotine level and a medium taste.

I really like this blend. A good tasting mix of different types that compliment each other well. Wonderful flavor with a sweet taste and some wonderful hay/grass notes. Well worth the buy, and am now 2 for 2 on the Pattons.

Age When Smoked: From the Jar

Purchased From: 4Noggins is the only option.

This is classic Virginia flavor. Although there is apparently some Turkish Imzar and cigar leaf present, those additions are undetectable to my (admittedly, limited) palate and, although this should have greater strength and depth than Patton's similar Virginia Squire blend, I find the opposite to be true. The problem is that the Virginias are the dominant tobacco here, so anything else in the blend is simply overwhelmed. There is very little to no bite, even when drawn upon heavily (which I had to do at times because it was difficult to keep the burn going). Still, this is a fine tobacco for Virginia fans. The Squire just edges ahead of this one, however.