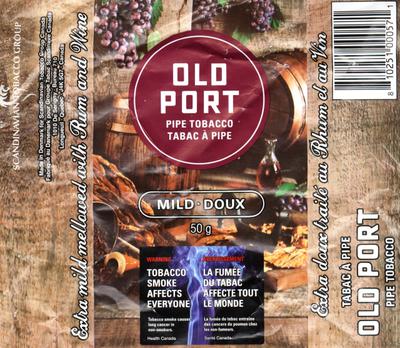 Scandinavian Tobacco Group also produce some, if not all the blends of Erinmore amongst several other brands.

The new version from ST Group Canada is better, but significantly stronger in terms of nicotine, than the previous version.

This is not a grand tobacco by all means, but is far superior to other drugstore blends as Captain Black, Sail or Borkum Riff in that the topping does not hide the tobacco taste (VA & BU), smokes wonderfully dry and leaves nice gray ashes on the bottom of the bowl which do not affect negatively the caking.

The rum & wine topping gives a nice, sweet and pleasant taste. The roomnote is surprisingly soft and non intrusive.

Sometimes, I just don't feel like preparing flakes, or rubbing out some coins or medallions. That's when I reach out for Old Port.

I bought a pouch of this stuff a few days ago as I wanted a cheaper alternative to the higher end blends I was smoking. I actually wanted Captain Black but couldn't find it (odd I know...)

First off this tobacco smelled like some filthy alcoholic you'd run into behind the Greyhound station. It smelled of cheap booze. It is long ribbon cut and not what I am used to in a pipe tobacco. I smoked the first bowl in a long stemmed pipe I bought in Poland that I always use for new tobaccos. First impression? Where is the taste? Nothing. It did have a somewhat pleasant natural tobacco after taste, but on the inhale, I got nothing. Next I noticed it make my mouth and in particular, my palate feel like a mixture of burning and needles and pins. AS I got down through the bowl, I noticed very slight traces of grape and rum (?) although nowhere near the flavour an Old Port cigar or cigarillo has. When I got to 3/4 of the bowl, my head was spinning and my stomach was rolling. I'm used to smoking a pipe and I also smoke hookah with tobacco shisha but this stuff made me feel like a first time 13 year old cigarette smoker. I tried a few more bowls of this crap until I decided it would be best to just give it away.

Don't' waste your money on this shit. It is worse than Borkums Cherry. At least I could smoke that crap.

Firts of all I want to thank Davie Jones to write Montréal with the accent on the ''e''. As You all know, Montréal was found as a french town and is still a town in a majority of french speaking people.

This done I want to warn everybody that would fall in the trap of buying this awfull tobacco. I bought a pouch something like more than two years ago and it is still waiting (and will for long) in my storage.

As long as my opinion worth something I would say thats this one is too much aromatized and much more than that is aromatized with an awful and lethal flavour of cheap rhum from the alambic of and old illegal bootlegger from the swamp...

This is an easy going, comfortable, no-nonsense ready-rubbed mixture. Yes, it used to be manufactured in Montréal for generations and incarnates a classic of Canadian grocery/convenience stores tobacco.

The new manufacturer has reproduced the original recipe and the tobacco is still the same. Mostly composed of medium/light brown leaves, it has a low moisture level and packs very easily. It also smokes dry.

I would agree with Old Northern Smoky that we are in presence of a VA/BU combination. Rum and Wine are added as a topping, so they do not impede on the smoking qualities. It actually doesn't taste as an aromatic because you can fully taste the tobacco. The topping is really doing its job in this case, it's revealing itself in the background and generates a pleasant room aroma. Maybe a result of the topping, but I am not sure, the first third of the bowl will tickle the tip of your tongue. It does not increase in strength.

If you happen to swing by Canada and are looking for an umcomplicated tobacco to puff on, you know what to ask for: Old Port. And the pouch design is also kind of cool.

No longer made in Montreal, it now comes from Denmark. No its not a cavendish and its my fault that it is listed as such. This blend is a mix of shred burley & virginia. The pouch aroma is mildly alcoholic and smells almost identical to the Old Port Colts cigarillos and Old Port small cigars I smoked years ago. It would not surprise me if it is exactly the same tobacco minus the wrapper.

There's not a lot of moisture in the pouch but plenty of stems. Packs and lights well. I found the nicotine so strong that I felt sick and had to stop puffing on this early in the bowl, but my wife doesn't find this at all. I found slight tongue bite but my wife found none. Go figure.

Room note is only very mildly aromatic but the suggestion of cigar smoke does come through........once again, my wife did not agree.

All I can say is give it a try and see how you like it...or not. I can't smoke this stuff, but my wife can smoke it all day long.

Next to Blatter 1907, this is her second favorite. So I suppose based on her assessment this tobacco rates a recommend. I'll stick to my Sail Green and C.B. Royal for an aromatic and Blatter Mild English for my English blend.

Well since the Danes have gotten their hands on this Canadian brand they have obviously had free reign and changed the recipe....thank goodness!

I have a feeling that Orlik is the S.T.G.-owned company making this brand now since I detect hints of Sail Natural in this. I wish the pouch indicated that its a new blend but it doesn't. In fact nothing has changed on the pouch itself. But the contents have. The aroma out of the pouch is still alcoholic but less intense.........less of a casing and more of a light topping. Gone is the rough shred burley and virginia. In its place is a typical gold and brown Danish cavendish.

In my opinion its drier in the pouch and lightly fluffy. Packs and lights easily and burns all the way down to a white/grey ash. The smoke is very dry on the mouth.....like after a glass of a very dry red wine. It is significantly lower in nicotine....a lot lower...to my liking

The room note is no longer cigar-ish, but a typical Danish cavendish with more pipe tobacco aroma.

The aftertaste is dry and slightly bitter on the back of the tongue, but it is much more enjoyable to smoke than the original recipe in my opinion.

Since you can walk out of the gas station with it for under $17 CDN, making it the cheapest 50 gram pouch you can buy, I would now recommend it with 3 stars.

I found Old Port to be quite an enjoyable smoke. It's certainly nothing complex, however right out of the pouch the moisture content was close to perfect. The tobacco seems to have a fairly natural smell, with a hint of that sweet rum and wine topping. Tongue bite isn't an issue if sipped. Because this is a European styled aromatic, it smokes dry and is not goopy like many American style Cavendish based aromatics. I can recommend this product to anyone looking for something simple to smoke around others as it produces quite a nice mild, sweet aroma.

I am new to pipe smoking. However, I can say that I really hated this tobacco. It smells bad in the pouch, and the taste was awful. I dumped it in the garbage. Not recommended.

In fact, Old Port has not been manufactured in Montréal. Maybe in the old, old days, but ever since I have tried that tobacco in 1985, the pouch said "Manufactured in Denmark", or "Imported from Denmark".

A classic broken flake combination of VA, burley and some Cavendish, enhanced with a rum & wine topping, it brings a nice change of pace.

This is based on the original product made in Montreal.

I have not tried the new product.

I enjoyed it, a no non sense tobacco with a nice pouch aroma.

The casing would tickle the tongue at times.

I found this in a corner store, and having enjoyed Old Port cigarillos in the past I went with it.

No tongue bite when smoking, and there's nothing I found to complain about. Middle of the road for tobacco strength, and always got compliments on the smell when I smoked it in public.

Note: it's not currently made in Canada, but it is Imported by STG Canada in Longueuil

Good taste, slow burn. Good for those looking for a mild smoke.