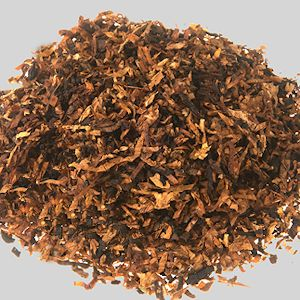 Removing the Perique from Cool Hand Fluke results in an all-natural, four-Virginia blend that is both tasty and just slightly sweet. Requested by a fan of my blends who loves Virginas but hates Perique. I'm not big on Virginas, but this will be a regular in both my cobs and briars.

Notes: Created in response to a customer request. Sold through 4noggins.com.

A one ounce sample from 4noggins. Chunky ribbon cut of colors ranging from blonde to black with a plain tobacco-y bag aroma. First bowl was a disaster because I packed too tightly. This one preferred a bit looser of a load, although it never really gelled for me.

Mr Patton zapped nearly all the sweetness from the leaf, instead opting for a drier, burley-er flavor. But no burley in the mix, even though this one eventually got into mid-level burley bitterness down the bowl. A surprising lack of development from a Virginia blend, particularly one that includes four different strains. The flavor was mild and elusive but from time to time it would dial in and become moderately enticing. Smooth and seemingly light on nicotine, but also light on depth and flavor. I found it interesting that this was derived from a similar VA blend with perique because I found myself wishing for some of that condiment. But that was nothing to elevate this one beyond mediocre in my book. Certainly this is better than most 2 star blends but it doesn't deserve 3. Still, this makes me think it might be a good idea for me to explore more from this blender. I did enjoy his Storm Front, but I'll pass on this one.

The blend's pretty coarse, mainly light and medium browns, with a few black specks. Because it's supplied by 4noggins the moisture's perfect.

The initial taste is sharper than the later flavour. At first, there's a stronger citrus note, which gradually dissipates, becoming more like dark fruit. The smoke has an ample sweetness to it, without seeming cased. The burn from it becomes a touch warm if strained, and it can give a nip to my tongue if pushed.

Quadruple Virginia: not that bad, but two stars feels right:

I am surprised to find myself and DK at such odds on this one. I absolutely loved this blend. Sometimes simplicity is all that is needed. Now, not being a blender myself, I guess I am probably not too qualified to render this a simple blend, but it certainly has that impression on me.

Four Virginias are used and it seems they do a great job of hitting all the flavor spectrums that a Virginia can deliver. I can't say I have had a Virginia do that so well as this one. There is the hay, grass and citrus notes indicative of the light Virginias and the earthy and fruity tones more indicative of the darker Virginias. I also get the impression that there is little to no treatment in the way of casings or toppings on this one.

I wish they sold this as a tinned product. I will be getting much more of this one.

It's a rougher cut of tobacco for sure, and there's four colors here -- oak, sienna, dark chocolate, and earth. It's very smooth -- I puff fast and never even flirted with bite. This has a very smooth and unassuming flavor. It's like cocktail piano -- you can pay attention to it if you want to, but even when you do, there's usually only a frisson of memory or recognition to enjoy. I found it to be a bit pale and monotonous. It's also light on the nicotine. Maybe it's your perfect early morning pipe; I could see easing into the day smoking this with some blond coffee and milk. It's certainly a nice, mild, all-day Virginia. This tobacco is Betty, not Veronica.

This blend smelled great in the pouch, somewhat sweet and musty smelling. It was a multicolored flake and came very dry. It loaded well in my pipe and I settled in with a cold drink and a book and set to enjoy an evening smoke. Once I lit up my pipe, I was greeted with a great aroma and very sweet and tasty first pulls. Then I had to relight. And then again. For some reason, maybe the fact it was so dry, I could not keep this blend lit, and when I puffed a little too much to try to do so, it started to bite me. It did smoke it all the way down and it was a very tasty blend that I did enjoy and was a great blend with a cold beer. But I could not go four star with it as it required so much relighting. I found that a distraction. But for the VA lovers, this is really a great tasting blend. I will hydrate it some before smoking it again and see if that improves it as I really enjoyed smoking it other than the relights.

Maybe it needed to be Octuple Virginia, four is pretty boring. Dry, almost to the point of crispy, and ready to burn at the whiff of a match, Quadruple Virginia is easy to smoke. Problem is, it doesn’t really taste like much.

I prefer some sweetness in my Virginias, and there’s not a lot to be found here. There’s really not much benefit to smoking it all the way down, as the strength and depth found in better Virginias at the bottom of the bowl is lacking here.

On the bright side, it doesn’t bite, but that’s about the nicest thing I can say about it.

I'm just not impressed with this one. It has a sharpness on the retrohale that is unpleasant and a mild bite to go with it. The flavors are fine, a little citrus and hay with some darker fruits, but they seem to be toned down. The sharpness just ruins this one for a retrohaler like myself. Finishing a bowl is a chore.

Borderline RYO, if it was shag cut this would be a no-brainer for cigarettes. I want more from a straight VA than this, though ... more flavor, more complexity, more character.

Cool Hand Fluke is plenty smokeable, dunno why it needs to get mashed up into this faceless, nameless mix of anonymous VAs. It's even kind of useless for blending - the blender is better served buying various VA leaf and knowing the proportion of lemon, orange, and reds that go into it.

A surprisingly flat blend from the good folks at 4noggins, but everyone misses the mark every once in a while.

As a fan of Virginias, I'm always on the lookout for something new. While I have enjoyed Perique/Virignias like Escudo and MacBaren's Navy Flake, sometimes they give a scratchy sore throat. Anybody experience this? Anyway John Patton Quadruple Virginia is nice and smooth with none of that sore throat thing because it has no Perique. There is no information about what the four Virginias are, but they result a nice cool smoke with less than normal Virginia sweetness which is often found in other Virginias such as McClellens. Quad Virginia seemed to be dry in the bulk baggie and lit pretty easily after a couple of efforts. It stayed lit which is good. Overall I liked the flavor and body. Maybe it's a little light on the nicotine, but I kind of I have been smoking higher nicotine tobaccos so it probably is average. Will enjoy what I bought and consider buying more when it's gone. BTW this is my first review.

I don't smoke too much Virginia but this was a really good smoke.

For years I have been trying to like Virginia blends. Either they bite, don't stay lit, come in flakes that take too long to smoke, or they are doctored up with frou-frou or perique.

It was a hot summer's day over here when I received a packet of Quad Va from Richard. Getting on for sundown, I packed it in a Sasieni and settled back.

JP says this is four Virginias: you can see different colours in the bag. Like other Patton blends, this is cut rough, with large pieces of leaf -- as if someone went into the storage barn and clipped some off the leaves hanging there.

It came fairly dry from Richard, and crackled a little on packing.

The familiar Virginia tang is there, but muted and biteless. Packed fairly tight it gives a good puff cloud and the flavour builds as you get further down the pipe bowl. Mild, but definitely has a presence. It has that typical JP harshness about it which I like.

I would rate this right up there with just about all the Va blends that I have tried, and would recommend it to anyone. It will be my regular Va from now on, until JP comes up with a replacement.

This is a mild tobacco with little to no bite. I didn't have the lighting issues that the previous reviewer had, so it might have been either moisture content or packing. In any case, the Quadruple Virginia has a very pleasant aroma and taste, and is fast becoming my favorite way to start the day.

Cancel my earlier review, please. It was meant as a review for Cool Hand Fluke, and I will post it there.