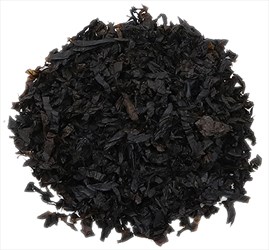 Notes: This was an Atlas Blending Corp. mixture. Cornell and Diehl bought the rights of all their old recipes.

Looks like your basic vanilla black Cavendish and even has some of the bag aroma of BCA. Black wide ribbon with some grayish color. Taste-wise, it's very clear that this is where something like Lane's BCA gets its genesis. However, this is not your average goopy aromatic that leaves a wet heel. The point of this seems to be as a blender, which is the reason I bought it. There is no vanilla taste but there is a slight, dark sweetness - different than a stoved Virginia... not as naturally sweet but just as dark. More caramel-y but like caramel with most of the sugar removed. In a word, exactly what I was looking for.

I'm working hard on an oriental-no latakia blend of my own. Whereas I prefer the flavor when I use a stoved VA, this was an interesting sidetrip. I'm going to use this on a sub-type but I'm not as close to finishing it as I am the main blend (without this added). Basically this brings a less firmly-backboned sweetness that will reduce the richness of an oriental blend while coloring the blend in a different manner. Kind of a caramel taste, but caramel "lite"... like a caramel for dieters or something. Hard to describe but really interesting, and destined for my blending table.

Packing & Burning: Clogged the airhole each time it was packed and difficult to get lit. Tool numerous relights and vigorous puffing to keep it lit.

Taste & Aroma: Straight: The smell fron the bag is not at all replicated. Not overtly sweet. Completely lacking in depth. Seemed to show promise of being dark and toasty but did not deliver.

Mixed: With a few VA blends, all that BC does is impart a dark complexion, obscuring the nice VA character.

BC does the make the smoke last longer, slowing the burn rate.

Overall: Go to 4Noggins bulk blending section for another description. If this is representative of burley cavendish, I can't see it as adding much substance. The aroma in the bag is not matched by the taste or aroma. The only thing it does is slow the burn rate. 3 stars, for what it is; two stars, for what it does.

I really enjoy this unflavored black cavendish. It’s mildly sweet like Caramelized sugar, roasted, and slightly musty/earthy like a cigar. It’s moist when when it first arrives, but this works to an advantage when blending with drier tobaccos. Mixed with my favorite Three Sails, it hydrates the dry shag of the Three Sails, slows the burn, and adds a layer of depth/ softness. Perfectly fine smoked alone, but a bit too monochromatic to justify doing so with the endless amount of excellent mild blends available . It’s a perfect mixer at a good price. Seems more honest and natural than other black cavendish I have tried in the past. It’s my favorite iteration of an essential blending component. 4 stars when used as a blender.

This black cavendish blending tobacco offers a little fermented dark fruit, caramel, and light sugar. The strength is mild, while the taste is a step or two past that mark. Hardly has any nicotine. Won’t bite. Burns cool and clean at a reasonable pace with very consistent flavor all the way to the finish. Leaves little moisture in the bowl, and requires an average number of relights. Has a pleasant, slightly lingering after taste. An all day smoke that’s better off being a mixer as intended.

I am very pleased with this rendition by Cornell & Diehl. There is nothing remarkable in the aroma, the tin note evokes the fermentation process Cavendish is subjected to, but the versatility and marrying properties of this tobacco are truly remarkable. It has a mild rough silky/oily bouquet that goes quite well with Oriental leaf and Latakia, but it can be mixed with almost anything. I have tested it on red and bright Virginia leaf as well, in different ratios and combinations, and the results were outstanding. And a small amount can go a long way. As a mixing component, nothing sticks out, but it will enhance the smoking properties of the tobacco leaf you are mixing it with, so it won't overpower your senses like the sweetened variety will do. I really cannot think of any drawbacks or shortcomings, so 4 stars.

A very broken flake. Black with patches of off-white bloom. Hard and dry tobacco. The bag note is dried fruit with an acetic note. It looks, smells and feels like a stoved Va.

Lights easily and burns cool and dry. The opening with this tobacco is stellar. It has light, clear citrus notes and a pleasing acidity. It has a refreshing sweetness like lemon sherbet. Don't be mislead by the 'cavendish' label, there is nothing whatever cloying about this tobacco. I can't detect any flavour additives.

About a third of the way into the smoke, clove and other spice like components of a phenolic character assert themselves. This adds an oriental like dimension to this tobacco. This is definitely not a linear or monochromatic blend.

I found the last part of the bowl of this tobacco to be on the harsh side, with a specific musty and slightly bitter taste that I wished were less pronounced. Nonetheless, this is a very good tobacco and those like me who enjoy fermented Virginias and stoved tobacco will appreciate its nuances, whether it is actually a true cavendish or not.

Edit 6 March 15. After smoking about 2 ounces of this I'm a little more dialed into its flavour profile. The burley component is much more in evidence and I strongly suspect the mystery component is deer tongue. I have taken to adding 5 to 10% Perique to 'brighten' this tobacco thru the latter half and it turned into a fairly decent smoke in its own right.

This was my late afternoon, evening smoke last night, and it makes for a nice calming change, as opposed to a heavily cased, sticky aromatic in the evening! Even though it's for blending, it's great straight-up!

As you can see here the blend is black; it's called Back Cavendish, so any other colour would be a shock! The moisture isn't bad, a bit 'sticky', but not drenched. It smells slightly sweet.

The smoke could be described, aptly, in a single word: soft. It isn't too sticky, isn't like a vanilla Cavendish, it's just gentle with a slight sweetness. This isn't a heavy, sugary flavour, or too false, but a delicate note. The burn? Perfect: very cool smoke, thick smoke and no bite anywhere.

This is quite different from many years past. Previously, I think C&D were getting this made for them by Lane where the typical green river tobacco was made into a sweetend but unflavored black cavendish and susequently was washed to reduce the sweetness. The current version is rather earthy with a slight dark chocolate aroma and cigar leaf character. this doesn't work as an aromatic blender and is more of a specialized blending component for more straight mixtures. I not sure it would be that good even for a straight english but I found it's greatest affinity would be towards ribbon virginia/perique blends. The old stuff was what I was looking for as a blender and I have noticed over the years that some of the older blends are quite different and suffer for this change in character i.g. Two Friends Redwood. I would imagine C&D are producing this in house and that may be the problem. This tobacco isn't "cavendished" thoroughly enough. They are more of an advanced amateur opperation and lack the industrial capacity and expertise to properly produce certain products.

I am reviewing several C+D blending tobaccos as a precursor to some blending experiments. I know not many people blend, but these reviews may provide some hints to those wanting to do so.

Stock Black Cavendish - the staple of many blends. Smokes cool with little bite, but also little flavor. Best in the designated role of a cooling agent and carrier for casing. Though if you want to smoke a very mild burley tasting tobacco, this could be it for you.

This tobacco was sent to me as a sampler from the shop I bought my pipe from. I have in the past smoked aromatics mainly with Black Gold being my go to tobacco. I got out of the hobby for about 2 years and am trying my hand at English and Balkan blends. I don't know what leaf is used in this blend but am thinking some type of burley? Who knows, maybe it's a Virginia. All I know is that the way I received the tobacco, it was just the right moisture content and burned extremely easy. Since I have the new Morta pipe, I smoked the first bowl very gently letting it go out since I didn't want to overheat the chamber. It relit very easily and I believe would have been a one light tobacco had my pipe been broken in. Overall, the flavor of the tobacco is very mild with some sweetness. It had no nicotine noticed and certainly did not bite. I thoroughly enjoyed the room note and even my wife said it had a good aroma. Basically, this could be an everyday smoke although it doesn't have any superlatives. It is just a good aromatic cavendish in my humble opinion. Try some!