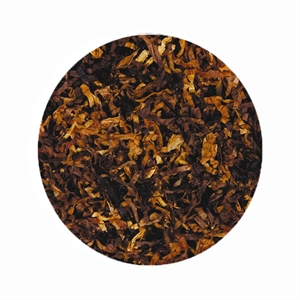 A Topgun tobacco for sure, #5 delivers strength and flavor while at the same time remains smooth from top to bottom. A little on the smoky side (thanks to the added naturally processed Cavendish), this thin cut ribbon will sate any tobacco urge for at least a couple of hours for even the hearty puffers among us.

This blend is similar to #7 and Dark Birdseye, but has a less pronounced Lakeland presence than both of those fine offerings.

Do puff gently and with restraint if you want to stay on your horse.

There seems to be quite a mix of different opinions regarding how to rate this blend, that intrigued and endeared me to it!

My first impressions were good; the blend looked decent in the bag, was nicely hydrated and gave off a non-offensive aroma. I felt even more interested in it! So I loaded one of my Pete's and began a smoke. Oh dear, that's when it all started to go wrong!

I don't particularly get any extra sort of taste, nor sadly to I get much in the way of natural flavour, what I do get is a heavy, clotted, sticky sensation in my mouth which is most unpleasant. Unpleasant to the point of being disgusting. To be negative again: I think the smoke is too hot. I get an even burn but it's too damn hot. Another negative: it bites me....hard. The room note is okay and the nicotine's not bad but they aren't enough to help the rating.

A few have noted this blend's lack of floral essence, but since when does a tobacco blend get demerits for not being soapy-tasting?? Isn't this like knocking a McClelland blend for not tasting like Ketchup? Even those who have grown to like and even prefer the Kendal "floral essence" -- Great Scott, can't you appreciate tobacco without it?

Well, No. 5 tastes like tobacco, not soap, and I for one dig it. The taste is actually pretty good. I have smoked this both straight and cut with a bit of non-sweet Black Cavendish and it was good both ways, maybe better with the Black Cav. This stuff was made for mixing, I''m tellin' ya'.

Strong, but no big deal for those of us used to strong blends. I mean, it IS Virginia, so you know it's not going to be a knock-you-over smoke. Go slow if not used to nicotine but please do not be apprehensive. The room note is good, but then I like the aroma of good Virginia, which this is. I agree with Pipestud, this is good stuff.

BTW, as my review date, No. 5 still is in production according to the GH website.

Age When Smoked: 2 years or more

I've been dipping into a big jar of this on and off for around four years now, but it's never made it into the "smoke often" category for me.

There's nothing in any way "wrong" with it. The virginias are balanced nicely by the dark-fired Malawi leaf which is sufficiently present to remove the tendency to bite hard that G&H's "Gold" shags suffer from and to add some depth and strength.

It tastes exactly like what it is, a Va/dark-fired blend with the emphasis on the Va. There's no "soapiness", no noticable flavourings, just good quality leaf. It even keeps its flavour outdoors well, which not all tobaccos do. It needs no attention at all to smoke and burns well and quite slowly left to its own devices.

Yet somehow I just don't find it very exciting. Worth a try though, it might well be just what you're looking for in a no-nonsense traditional blend that doesn't take as long to smoke as a flake.

One caution - it is a bit stronger in nicotine than the taste might lead you to think, so a little caution concerning bowl size might be in order until you've get a feel for it. Oh, and aging doesn't seem to change it much.

According to Gawith Hoggarth's website this tobacco comprises bright and dark virginia leaf + a pinch of black Cavendish tobacco. I am finding most of the Kendall loose tobacco very similar in this range. In this particular instance the addition of Cavendish tobacco sets it apart in that respect, but like other reviewers are saying it is rather unnoticeable. I am a fan of Kendall loose tobacco, but they are better enjoyed in smaller bowl sizes, most particularly, the ones that tend to bite. Having said that, I am finding n 5 very satisfying in many fronts. The leaf is not as sweet and earthy, but the stoved Virginia leaf adds body and strength with no bite. Every now and then it hits you with cigar leaf undertones and it will get stronger the more you progress with your smoke. Like any other Virginia tobacco, it wants to be sipped, so you need to smoke it at a very slow pace. I don't think it deserves it, but I am giving it 4 stars to offset the bad reviews anyway.

I was rather disappointed in this blend. After smoking several bowls in different pipes I have come to the conclusion that the tobacco has a rather weak taste though it is very strong. I have tried many GH blends and this one is at the bottom! I love the “soapy” taste that most of there blends have and in that department this one receives a one out of ten. It has a reminiscent hint of it but completely looses it when lit. The tobacco is very finely cut into thin ribbons and lights up rather quickly. It also stayed lit very nicely and with minimal fuss which was nice. The charring light lent a hint of sweetness due to the Cavendish tobacco. It was a little spicy towards the middle of the bowl and finished with a strong bang. I really like strong tobaccos and this blend had that, what it lacked was something to draw me back to it!

Pretty strong nicotine wise, very peppery and earthy. Not complex but a perfectly nice smoke. Has very little in the way of Lakeland essence. It's fine, but not amazing.

It's not often I disagree with Sir Pipestud, but even as a GH lover, this blend misses the mark for me. It's strong, which is something I like, pretty full in flavor, which is another plus and its made by GH, yet another plus. But...it's boring. Plain and simple. The baccy is not complex and the cavendish is barely noticed. Is it a bad tobacco? No, and I have some cellared to see what some time does to it. However, I won't be buying more until I see where the aging takes this blend.

This tobacco is from a company that is well known for its scented, or “Lakeland” style tobaccos, but this isn't one of them. No. 5 Mixture is “a very traditional British blend of Virginia, dark fired, dark air-cured and cavendish tobaccos. Pure tobacco with no additional casings or top flavors.” Peterson's Irish Flake is what comes to mind when smoking this blend, though the sweetness evident in No. 5 is more pronounced. Not like eating a candy bar, mind you, but definitely pronounced enough that this tobacco might even appeal to a different group of smokers than Irish Flake.

The cut of this tobacco is somewhat shaggy and might be termed a chopped ribbon cut. The pieces of tobacco are small but it's easy to imagine that they might have at one time been combined into longer ribbons. This makes for an easy pack and light and there's no problem getting this stuff lit and burning.

Upon ignition, the dark-fired flavor comes right to the forefront. This is the only noticeable similarity to Irish Flake; No. 5 tends to be a little sweeter and not as strong in the nicotine department. One shouldn't discount No. 5's strength, however; after smoking a bowl of this blend, you know you've smoked.

There are probably as many thoughts about tobacco taste as there are tasters. Some smokers prefer a “complex” tobacco, providing them with a hint of first one flavor, then another completely different one. Others prefer tobaccos that provide a solid single flavor profile throughout the bowl (the first group might call this “monochromatic”). No. 5 Mixture falls into the second category. Its flavor is nothing if not reliable, maintaining the same basic Virginia flavor and sweetness throughout most of the bowl. Where this changes is near the end of the bowl. A slight ashiness develops toward the end and the sweetness diminishes but doesn't disappear completely. By the time you realize this has happened, you've drawn the last puff and the bowl is complete.

Tobacco taste preferences being what they are, making a recommendation to someone is an iffy proposition. To be sure, No. 5 Mixture is a worthy tobacco in its own right; however, it would also make a great stepping stone blend if you're working up to stronger tobaccos. If you already smoke tobaccos of Irish Flake's ilk, this will provide a similar smoke with enough difference to be interesting.

This is (in line the "tin description" at the head of this page, taken from the GH website) an untopped musty Va/Bur with an addition of dark Cavendish. My sample (which I happen to know was fresh in) was a little too moist and benefitted from some airing. Strength is about medium and perfectly managable.

This is not a typical "Lakeland" scented offering. Try Ennerdale or Kendal Flake for that.

Bulk: A very long, stringy ribbon cut, with quite a sweet smell like syrup on toast, ranging from black-brown to light brown, mostly brown. Supplied only in bulk, it is fairly dry and leaves no residue on the fingers.

Lighting & Burning: Lights with one match all the way to the bottom of a bowl and burns quickly.

Taste & Aroma: If ever there was a Gawith blend that displays the signature Kendal scent, this is it. It is a potpourri of a flowery taste and aroma that is characteristic of the Lake District. There are hints of toasted syrup in the background. Imparts a disagreeable salsa feel to the tongue.

Overall: For a definition of a scented Lake District blend, this is it. The toppings command all of the attention; it would be just as well if the Virginias were not even present. Concerning the Lake District scent, see some of the reviews of SG's Grousemoor and Sam's Flake.

GH's Scottish Mixture and SG's Scotch Cut Mixture and Best Brown are all likewise stated by the blenders as having no added flavor. GH's No. 20 Latakia Mixture is its cousin, No. 20 having Latakia added.

No. 5 is definitely a candidate for an indoor smoke, but not all day due to the swoon brought on by the nicotine. For the purist, the scent is a bit over the top, but there's nothing wrong with No. 5.