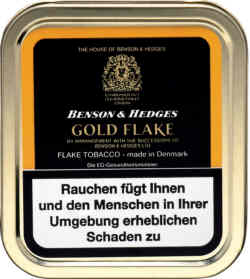 This Flake is a harmonic composition made of select Virginia tobaccos from excellent provenience.
Ripened in the press for a long time, each slice develops its pronounced, fine aroma.

Gold Flake was sent to me several years ago by a friend across the pond that I tobacco swap with from time to time. I don't even know if it is still being made. The Virginia is made from bright, which kind of nips my tongue if I don't smoke it slowly. I had to be careful because the flake does burn fast and frankly, offers little by way of taste. Fully rubbed out, I can see where this one might do well in a RYO for a slow burner. Just wasn't my cup of tea at all.

Just a note on "room note" - my sense of smell is non-existent and that is why I marked the room note of this tobacco as "unnoticeable".

I am a virginia man through and through. I nowadays don't smoke anything else (normally) because for many years I was wedded to the old B&H virginia flake which was a truly superb tobacco. I used to alternate the B&H with Sobraine rich virginia flake which, for me, was the best virginia tobacco ever brought to life on this Earth bar none. But all gone now.

So what of this blend? Well, it is not in the same league as its illustrious predecessor but neither is much anything else out there. Actually, this blend is more than pretty good - it is damn fine smoke - one of the very best virginia flakes you can buy. I am not saying I have tried them all - but I have tried an awful lot of them over many years of pipe smoking.

The tobacco is flavoursome, doesn't "bite" and smokes all the way through to a fine ash. It is way better than Sam Gawith's FVF and just about anything else.

Wide but thin light brown flakes, easy to fold and stuff. Tin nose was citrus, although not nearly as much as some other blends. This tin was picked up at an estate sale and I have no idea how old it is but it does have the warning label.

Once again, this one smoked pretty bland with the first bowl I smoked at tin moisture. It didn't appear obnoxiously wet but my motto is just when you think Virginia flakes are dry enough, dry them some more. Flakes seem to hold a lot of moisture. Once properly dried, this proved to me to be a somewhat overhyped, very mild tobacco with a sweet side that wasn't just lemon Virginia. Again, I couldn't place the flavoring and it wasn't obtrusive but it was noticeable. There was an occasional light spice that filtered in at times and it was most welcomed. The overall presentation was a citrusy tobacco that leaned toward the bland side. It had none of the body or immediacy of my lemon references, Butera's Golden Cake and F&T's Cut Virginia Plug. As I had just smoked a couple of bowls of Dunhill Light Flake, this one wasn't up to par with that one, either. If you're in the mood for a no-nonsense, hot weather outdoor smoke, this might fit the bill. Then again, it seems to be out of production, so there are other more affordable and more available options that would be just as good or better.

I can see I'm going very much against the grain here, this tobacco just did nothing for me. Now don't get me wrong, when it's hot and humid, I like a mild to medium smoke, but I can't see myself lighting this up even in a sauna.

Presentation is fine along with the quality of the leaf, absolutely no bite, just the taste of a very mild tobacco. Sadly, within a few puffs, that too disappears to the point where I am re-lighting just to see if the stuff is lit.

Rummaging around in the cellar in search of something new to try, I found some tins of this blend that I had all but forgotten that I had. In fact, it was the reviews below that made me stock up on it in the first place a couple of years ago - and I am glad I followed the hunch I got that this might be a flake I would really like. Another reason to chime in with a review is that a flake this good deserves way more attention than just four (or five, now with mine) reviews.

Popping the tin yields a nice, sugary sweet tobacco aroma. I can't really detect any toppings here. The flakes themselves are lightly brown, with some birds eye and the odd "stick" embedded here and there, nothing unusual in other words. Very neat and thinly sliced, they're also wider than I was expecting, but as far as I'm concerned, the visuals are top notch. The tins does have that K+K "leaf wrapper" thing going on, which is strange. Made in Denmark? Hm... well, either way, the visuals are top notch. No drying needed as the flakes are all in perfect smoking condition from the get go.

Packing is as easy as fold, fluff, stuff. It takes a little while for this one to open up, and the first 1/3 or so is a little unremarkable before it starts to get going. But soon enough it develops into a mild and delightfully sweet smoke, sometimes with spicy undertones. Its taste is mild, but definately flavourful in a sweet and grassy sort of way. It also seems to be somewhat potent as far as nicotine goes. I would say it's on the lighter side of medium, but still satisfying in strength and taste. I find myself sinking deeper and deeper into the recliner with this one, just gently going along for the ride. It's very consistent in taste, intensifying slightly the further down the bowl you go. I can't really put my finger on what it is, it just has a genuinely pleasant way about it overall that wins me over. Light sips is the way to go for maximum flavour, as per usual with VA flakes, but it won't punish you if you puff fast. Very well behaved and with excellent burn rate from top to bottom.

Roomnote is extremely unobtrusive, I could barely tell something had been smoked in the living room. What little evidence there was disappeared quickly too and left nothing stale or otherwise unpleasant in the air.

In conclusion this is a very nice flake, with a delicately sweet and alluring flavour that only highest quality and properly aged VA can provide. It simply begs for repeated smokes. The easiest four stars I've awarded in quite some time, even if it is not totally flawless, it deserves a "highest" recommendation in the very least.

As a post scriptum to the review above, a few notes on its availability. By all accounts it seems to have joined the ranks of many a great blend that are no longer among us. A real pity, as this might possibly be one of the best VA flakes I have smoked to date. I can't for the life in me understand why they would discontinue such a great blend. B&H Gold Flake will at least live on in my memory, and in my cellar, for some time to come.

I didn't find it particularly similar to Golden Sliced, by the way, which is a long time staple in my VA diet; can't say I picked up at all on the bergamot thing that OGS has going on, but anyway, my advice is definately to pick up a tin of this if you come across it, I don't think you'll be sorry you did.

I smoked a tin of this fine blend almost a bowl or two per day. I can say that it is a high quality flake for any time smoke. At the first bowls I would rate this tobacco with four stars without hesitating. After a while the casing in this tobacco, which very mild, began to disturb me a little bit. The casing is not overwhelming or untasty but it unfortunately shadows the natural flavor of the very fine Virginia leaf used in this blend. The flakes are thin and easy to pack. It burns slow. I must say that it is one of the coolest flake I have ever tried. The casing problem might be just mine. Maybe I will not feel it in this way in some other time in the future. I will surely will give this blend another try and maybe will update my review with four stars. It deserves only three stars for now.

The first time I saw this blend at a tobacconist's, I bought a tin, based on the previous review. I can't say I'm sorry I did.

The tin is quite flat for the fold-and-sink-cut flakes, but that's OK; the cut is nice and thin. The tin aroma hits me as a cross between Poul Ilsted's Own Golden Flake and Orlik Golden Sliced (red) - the aroma applied I make out to be Bergamot citrus like Orlik's offering, but the VA tobacco used is much more like the Ilsted-branded blend. The packaging shows me a familiar drawing of three tobacco leaves on the liner -- Kohlhase, Kopp & Co. of Germany use that particular picture a lot, but the tin states that this blend was made in Denmark.

The individual flakes are perfect to fold, twist, sink and light; no re-lights necessary for me and the smoke starts out with a good note of Bergamot in the aroma and a nice tingle on the tip of my tongue, progressing to more serious VA notes throughout the first half. The citrus flavour is not nearly as strong as with OGSR, but still quite noticeable to me in the first half of the bowl. Later on, the VA takes over with a good, solid sweetness that translates into a nice room note with a touch of brightness in it, though an aromatics/english-blend smoker commented that the aroma was cigarette-ish.

In the end, there is only some bright ashes left in the bowl; this blend burns nicely and is quite satisfying to me.